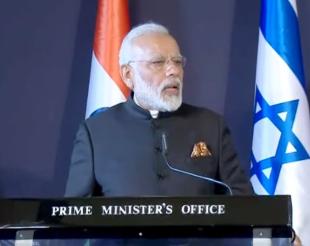 Trade between Israel and India is rather small, amounting in 2016 to less than $2 billion (excluding diamonds). Israeli and Indian business leaders would like it to grow and are pressing their leaders to reach a free-trade agreement to boost that figure substantially.

Shraga Brosh, the president of the Israel Manufacturers Association, and Pankaj Patel, president of the Federation of Indian Chambers of Commerce and Industry, an association of some 250,000 businesses in India, according to its website, will be inaugurating a forum of Israel-India CEOs on Thursday with the purpose of increasing the countries’ bilateral trade tenfold, to around $20 billion a year.

Prime Minister Benjamin Netanyahu and Indian Prime Minister Narendra Modi, who is now on a visit to Israel, are both expected to attend the event.

The forum also proposes relaxing visa requirements for workers and increasing the number of flights between Israel and India. The recommendations also include proposals to unify quality standards and to boost tourism between the countries in both directions.

Israeli exports to India amounted to $1.5 billion in 2016, down 13 percent from the year before. Most Israeli exports, with the exception of diamonds, consisted of machinery,electrical equipment and chemicals. Indian exports to Israel totaled $800 million last year, a figure that was also 13 percent lower than 2015’s figure, and consisted primarily of chemicals, textiles, plastics and rubber.

"What’s it going to take to get Israeli money to take India seriously? Just open their eyes," Jon Medved, CEO of Israeli equity crowdfunding group OurCrowd said. "The problem is their eyes are ... blinded by the China opportunity," he added.

There have only been a handful of Indian investments in Israel over the past decade, as opposed to the $16.5 billion received from China in 2016 alone.

OurCrowd just closed three deals with India, joining with Reliance Industries for a hi-tech incubator that helps to grow young companies in Jerusalem, bringing Israeli technology to India with Reliance Capital, and collaborating with India’s Lets Venture to invest in start-ups.

During Modi’s visit, Zebra Medical Vision, a company from a kibbutz near Tel Aviv, and Bangalore-based Teleradiology Solutions will sign a partnership to use analytics in 150 health-care centres.

Looking to reorient Israel’s economy toward Asia, Netanyahu hopes more deals will follow, setting a goal of increasing exports to India by 25 percent in the next four years. But it may take a while before the Modi-Netanyahu relationship sparks a serious expansion in investment and trade, both of which remain relatively negligible.

In many respects export-dependent Israel and India, which is focused on supplying its huge population, are complementary.

Israel is a global leader in water and food systems, two critical fields India needs to upgrade. India wants to strengthen its manufacturing base and is looking to do so with technologies coming from Israel. Both countries host major diamond trading and polishing hubs.

"It’s nothing, it’s a blip. Why hasn’t the relationship grown to the level it should have?" said A. Didar Singh, secretary general of the Federation of Indian Chambers of Commerce. Singh said more needed to be done to ease regulations, lower non-tariff barriers and solve licensing problems.

Incentives and lifting of red tape could help overcome what diplomats, lobbyists and business owners say is a cultural divide between the breakneck pace of Israel’s start-up scene and India’s more gradual approach.