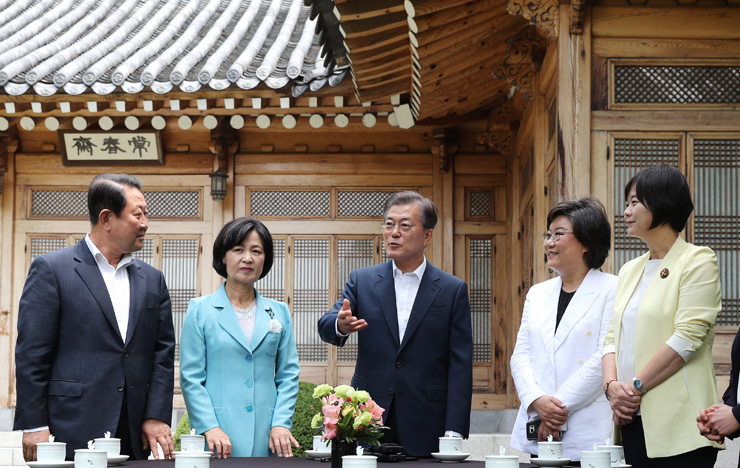 Moon promises to consult with Assembly on US FTA

The President made the comment during a five-way luncheon meeting with leaders of ruling and opposition political parties at the Cheong Wa Dae compound.

Moon stressed that Washington’s request should be understood as "revision or modification," not a "renegotiation" of the agreement, according to Rep. Park.

Moon told the party leaders President Trump is increasingly using the word "renegotiation" of the KORUS FTA for rather complicated reasons having to do with domestic politics, Rep. Park said.

Presidential spokesman Park Soo-hyun quoted Moon as saying, "I discussed FTA issues several times at the Seoul-Washington summit during which time we said it would not be a renegotiation."

Trump earlier called the KORUS FTA an "unacceptable" and "horrible" deal in which Washington has sustained enormous losses.

Moon told party leaders he made it clear during the summit with Trump that the deal is well balanced for both countries as the U.S. has had a gain in the services sector while Korea gained in manufacturing industries, according to the spokesman.

"I will fully consult with the National Assembly," Moon said. "I can confidently say you don’t have to be worried about it too much."

Regarding the government’s official offers made on Tuesday for dialogue with North Korea as a follow-up measure to the peace overture he proposed in his recent speech in Berlin, Moon told the party leaders he notified the U.S. in advance.

"Japan also understood it," Moon said, adding he explained the need to distinguish talks for denuclearization and humanitarian issues when he met with heads of state during his recent overseas tours including the G20 summit.

"South Korean will lead inter-Korean dialogue on humanitarian issues, and this will also help denuclearize the Korean Peninsula," Moon said.

The meeting between the President and four party leaders lasted about two hours.

It marked first time for Moon to meet with them since his May 10 inauguration.

Instead, he visited Cheongju, North Chungcheong Province, to support restoration work following flood damage. The city was among the hardest hit, seeing 290 millimeters of rainfall over the weekend. Two people died in landslides.

Hong, who was the runner-up candidate in the May 9 presidential election, told reporters in Cheongju he refused to attend the meeting because he did not like the Moon government and the ruling party’s attitude on the U.S. government’s actions to amend the KORUS FTA.

"If I begin to talk about the free trade agreement with Moon, I will have no choice but to get angry," Hong said to them.

Hong said when he led the National Assembly endorsement of the KORUS FTA in 2011 as chairman of the then-ruling party, Moon and the DPK, at the time the main opposition party, strongly opposed its passage, even calling Hong a "traitor to the country."

"The DPK at the time claimed it would push for renegotiations with the United States if it took power. But it now faces calls from the U.S. to renegotiate the agreement."

LKP insiders noted Hong wants the Moon government and the ruling party to apologize for their previous criticism of him, as well as their current attitude toward the renegotiations.