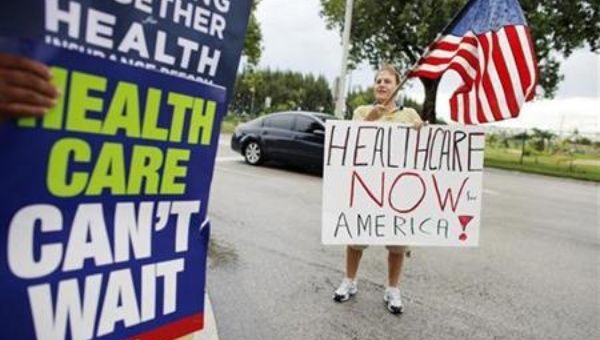 More than 70 US health, consumer and other groups demand elimination of NAFTA 2.0 terms that would lock in high US medicine prices

Letter to Congress: Giveaways to Big Pharma Must Be Removed From Revised NAFTA

In a letter to Congress, the groups – representing tens of millions of Americans – demand that the pact’s giveaways to Big Pharma that would keep medicines unaffordable be removed before the pact is sent to Congress

The diverse group of patient advocacy, faith, consumer, labor and other public interest organizations that signed the letter took aim at NAFTA 2.0 terms that would “lock in place existing U.S. policies that have led to high medicine prices, undermining the authority of this and future Congresses to implement important reforms to expand generic and biosimilar competition, lower medicine prices and expand access.”

Among other dangerous requirements is that each NAFTA country guarantee a minimum of 10 years of marketing exclusivity – that is, longer monopoly protections – for cutting-edge biologics, which includes many new cancer treatments and even vaccines. This would lock the United States into its current system that keeps prices for biologics sky-high and export it to Mexico, which does not mandate a special exclusivity period for biologics, and to Canada, which now has an eight-year period.

Some of the signatory organizations have identified ways in which the NAFTA 2.0 text improves on the original NAFTA and are calling for strengthened enforcement of the revised pact’s new labor and environmental terms. But one way in which NAFTA 2.0 is dramatically worse than the original is the addition of a slew of new monopoly rights for pharmaceutical corporations that would help them avoid competition from generic and biosimilar products and keep medicines unaffordable.

The letter notes that a decade ago, congressional Democrats and then-President George W. Bush agreed on a standard for trade-pact intellectual property terms that strove to promote innovation and access to affordable medicines. That standard is not met in the NAFTA 2.0 text.

With one in five people in the United States failing to fill prescriptions due to their cost, the letter signers urge the new Congress to demand “that the administration eliminate the provisions in the NAFTA 2.0 text that undermine affordable access to medicines.” Focus on widespread public anger over health care costs helped propel the Democrats to victory in the midterm elections.

The full letter and list of signing organizations are available here.