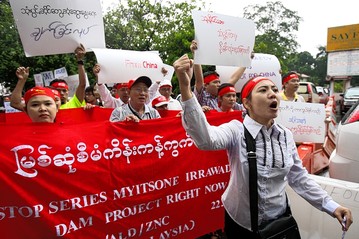 Myitsone dam is now a sovereignty issue By Aung Zaw

In the latest show of popular opposition to China’s proposed dam, prominent Myanmar environmentalists, writers and civil society leaders formed a national committee to oppose the suspended project, and warned the government of more resistance if it is revived.

The Myitsone project is expected to be one of the issues on the table for discussion. The Myanmar public wants her to say no to the massive hydropower plan, but so far her statements on it have been vague. But saying yes to the project would be political suicide for the government and for Daw Aung San Suu Kyi herself.

In 2018, speaking at the Asia-Pacific Economic Cooperation (APEC) summit in Papua New Guinea, Xi announced that “China will work with all countries involved with the BRI according to the principle of consultation and collaboration for shared benefits”. He vowed the initiative would incorporate high standards, “so that it will deliver quality outcomes and create even greater development opportunities for the people in the Asia-Pacific and beyond.” But anti-China sentiment and demand for a critical debate on the BRI are growing in Myanmar.

Chinese officials now acknowledge the China-funded Myitsone project in Kachin State is part of the BRI project, and Beijing has recently stepped up pressure on Myanmar to accept the project.

The Chinese ambassador, as well as other officials and representatives of China’s State Power Investment Corporation (SPIC), have traveled to Kachin State to meet local groups in an effort to persuade them to say yes to the project. However, public emotion there is running high, and a sense of anger toward China is spreading to the rest of Myanmar.

But no one at the leadership level has openly opposed the project, out of fear of upsetting Beijing.

He said his organization would be led by public opinion. “We can’t object if they accept it. We can’t force the people if they don’t accept it.” This is an ingenious answer—who in Kachin State would support the project?

The project was signed in 2006 under the previous regime led by Senior General Than Shwe. But when President Thein Sein took office in 2011 the project was suspended due to a strong negative reaction from the public.

The Myitsone Dam project would cost about US$3.6 billion (5.4 trillion kyats) and reportedly submerge about 766 square kilometers of forestland—an area bigger than Singapore.

In 2006, a delegation led by General Thiha Thura Tin Aung Myint Oo (who served as vice president under U Thein Sein’s government before resigning), went to Beijing and signed a Memorandum of Understanding (MoU) securing Chinese help with hydropower development, including the construction of the Myitsone dam. No public criticism was possible at that time, as Myanmar was still under the repressive military regime.

Inside sources say the regime’s leaders had little experience with multibillion-dollar projects such as Myitsone or the Kyaukphyu deep seaport project in Rakhine State. Local attorneys who were close associates of the military were consulted and the MOU and related contracts were signed.

Indeed, the dam is a dagger in the heart of the Kachin people, and they won’t accept it.

In 2011, when the country was opening up, Myitsone was one of the issues that received domestic and international attention.

The initial reasons for the anti-dam protests centered on the project’s negative environmental impacts, including the likely damage to fisheries, the flooding of wide swaths of jungle and altering of the downstream river flow, as well as fears of what would happen in the event of an earthquake. But as much as all of these things, the protests are motivated by the symbolic power of Myitsone—which is an emblem of Kachin ethnicity and the site of the confluence of the N’mai and Mali rivers, which forms the source of the Irrawaddy River.

On Sept. 30, the then president, U Thein Sein, surprised everyone by announcing that the joint venture with China to build the mega-dam had been suspended because “it was contrary to the will of the people.”

U Thein Sein received much-deserved praise from Western leaders, including critics of the regime. The decision to suspend the project was seen as a snub, causing China to lose face.

The decision was also no doubt a cue to Western countries that still had sanctions in place against Myanmar.

Opening up the country’s political system, releasing political prisoners and allowing Daw Aung San Suu Kyi to take part in the political process was part of the package that the regime’s leaders offered to improve relations with the West and to have sanctions lifted. Moreover, the decision to suspend the Myitsone project was a gamble signaling to the West that Myanmar wanted to balance the Chinese threat in the hope of diminishing Western sanctions and ending its pariah status.

There is no doubt that the decision was well calculated; Myanmar suddenly became a friend of the West and saw the gradual lifting of sanctions.

In recent years, however, China has been seen as Myanmar’s “big brother” neighbor and a strong political ally.

This has shown up the hypocrisy of the West’s shallow policy toward Myanmar, which has seen Western countries rally against Myanmar due to the crisis in northern Rakhine, where thousands of Rohingya and local people have fled due to terrorist attacks, a long running conflict and the military’s operations. China is back at the forefront of the engagement in Myanmar and has restored its previous position as a “big brother”. The West has retreated to almost the same position as before. A top-ranking government official who spent several years overseas and came back to join Daw Aung San Suu Kyi’s party admitted that the pressure the government faces is mammoth and ultimately unbearable. “We are inevitably back into China’s orbit,” he said. “We are surrounded by enemies inside and outside. They are trying to bring down our government.”

The West’s pressure came as a blessing in disguise, as Myanmar has been forced to seek China’s diplomatic support at the United Nations to see it off. Some political observers say that the West sees Daw Aung San Suu Kyi’s stance toward China as being too cozy; Western countries raised the issue of the Rohingya in northern Rakhine State when she came to power. Now, faced with mounting pressure, she has found China as a close ally. She has maintained stable relations with India and Japan, but they don’t carry as much political weight on the UN Security Council or on the international front.

Daw Aung San Suu Kyi has been unusually vague on the Myitsone issue since coming to power. After taking office, her government formed a 20-member commission that includes the chief minister of Kachin to review the dam and its likely impacts on the environment and local communities. The commission has produced two reports to date, but the government has yet to release either.

When in opposition she initially delayed weighing in on the dam issue. When she did finally voice her disapproval, the then opposition leader echoed the public’s concerns that the dam was dangerous and divisive.

In a statement issued at the time, she said, “Since the commencement of the Myitsone project, the perception long held by the Kachin people that successive Burmese governments have neglected their interests has deepened.”

She went on to say, “We would urge that in the interests of both national and international harmony, concerned parties should reassess the scheme and cooperate to find solutions that would prevent undesirable consequences and thus allay the fears of all who are anxious to protect the Irrawaddy.”

She no longer makes such statements.

In March, local residents in Pyay, Bago Region asked her about her opinion on the controversial project and she replied, “I would like you to think [about the project] from a wider perspective.”

She then said the final decision would have to be politically, socially, economically and environmentally sound and sustainable.

She also said her government should not abolish a project approved by a previous government just because it did not comply with the current administration’s policies.

Does this mean that she will give the go-ahead to the project?

In late January, U Thaung Tun, minister of investment and foreign economic relations, said the government and a commission studying the project are in very serious discussions and considering all possibilities, including downsizing the dam, relocating it or developing other projects instead.

But locals won’t accept any compromise on a dam project on the Irrawaddy River. They have said that enough is enough.

Myitsone is now a sovereignty issue and the majority of Myanmar people won’t accept the dam. Any political leader, including Daw Aung San Suu Kyi, who seeks a compromise that would allow the Myitsone Dam project to proceed will surely face the public’s wrath.