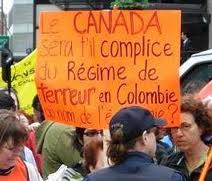 NDP : Harper gov’t report on human rights abuses in Colombia is a ’sham’

By : Julian Beltrame, The Canadian Press

OTTAWA — The NDP and civil society groups are accusing the Harper government of whitewashing human rights abuses in Colombia in the latest report to Parliament on the impact of Canada’s free trade agreement with the South American country.

The government quietly tabled the report last week, a requirement under the 2011 Canada-Colombia free trade deal, but concluded — as with last year — that "it is not possible to establish a direct link between the (agreement) and the human rights situation in Colombia."

"This report would have Parliamentarians believe there are no trade and investment related human rights concerns in Colombia and that flies in the face of abundant and well-documented evidence to the contrary."

The report specifically excludes the deal’s foreign investment chapter, which calls for firms to meet international standards for corporate social responsibility on "issues such as labour, the environment, human rights, community relations and anti-corruption."

Instead, the report focuses on the potential impacts of tariff reductions dictated by the agreement. The report does not deny there might be abuses in Colombia, but says there’s no evidence they were tied to tariff reductions. "It’s a sham. Investment is a very big part of our trade with Colombia and to arbitrarily exclude that is another indicator that the government has no intention of producing a real report," Davies said.

He said the Harper Conservatives — then in a minority government — were pressured to insert the reporting requirement to win over Liberal support for the deal, and have acted since to make the reports meaningless.

A spokesperson for Trade Minister Ed Fast said the government had met its obligation and that the Canadian embassy had consulted civil society, labour unions, industry and local authorities.

"We know the NDP anti-trade views. They voted against the Canada-Colombia Free Trade Agreement, including the human rights report provisions," said Shannon Gutoskie in an email response.

Amnesty International, along with the Assembly of First Nations, also blasted the government for ignoring the impact of mining operations on indigenous people in Colombia, noting that just last month the United Nations warned that 40 of 102 indigenous nations in the country are at risk.

Yet the government did not invite Colombia’s National Indigenous Organization to provide input, the groups said.

Amnesty campaigner Kathy Price said the government discouraged public submissions to the report. She said a call for public comments on March 19 was "buried" in the Foreign Affairs and International Trade webpage and was only open for six days. Also, the notice was not available in Spanish even in the embassy webpage in Bogota, the Colombian capital.

"You had to know it was coming to find it," she said, adding that this year’s notice was only a slight improvement over 2013, when few were aware of the submission period at all, and no one responded.

This year the notice attracted two submissions. Those raised "concerns about assassinations of trade union activists and repression of those who are viewed as obstacles to the development of Colombian oil, mining and agricultural resources," according to the government report.

But the report goes on to say that the responders failed to link the abuses directly to the reduction in tariffs under the agreement — the only area the report looked into — or to provide an analysis of changes in the human rights situation during 2013. As well, it says free trade deals with the U.S. and Europe likely had more impact.