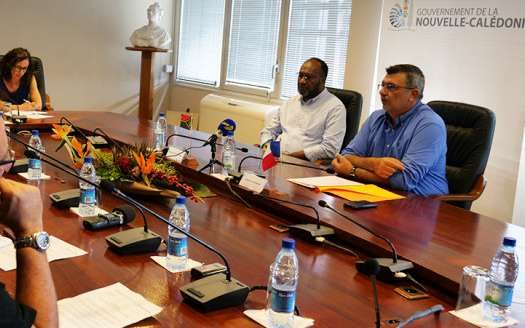 The leaders of New Caledonia and Vanuatu have met to finalise the free trade agreement the countries signed in April.

New Caledonia’s president Thierry Santa and Vanuatu’s prime minister Charlot Salwai held talks in Noumea in the hope of having the deal ready for ratification before Vanuatu’s general election in March.

The arrangement provides for the lifting of taxes and duties on 40 products in both countries.

Questions reportedly remain, however, about New Caledonia’s biosecurity, which is considered stricter than norms applied by the World Trade Organisation.

Once the final terms have been agreed, the trade deal is expected to be submitted to New Caledonia’s Congress and the government of France.

Mr Santa is also quoted as saying that he thanks Vanuatu for its support allowing New Caledonia to become a full member of the Pacific Islands Forum, the international organisation of the Francophonie and the French-speaking assembly of the Pacific.

Vanuatu is officially a trilingual country, accommodating Bislama and both French and English the languages of its two colonisers.