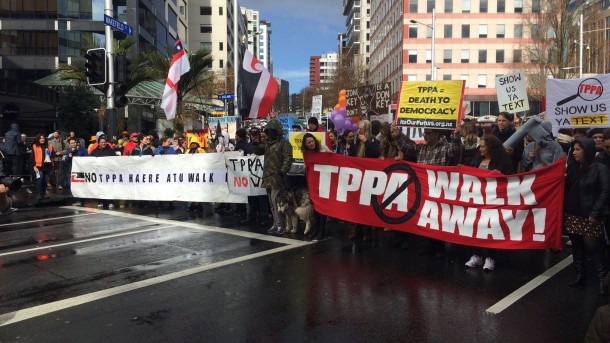 ‘The new government of Labour, New Zealand First and the Greens will have to move fast if they are going to influence the outcomes of trade and investment agreements being negotiated under the National government’s mandate, and which they all, in various ways, have opposed’, says Auckland University law professor Jane Kelsey.

There are at least five negotiations currently underway, all using the same broad template: the Trans-Pacific Partnership Agreement, Regional Comprehensive Economic Partnership (RCEP), the Pacific Alliance, and agreements with the European Union and United Kingdom, plus reviews of the China and Singapore FTAs.

Most urgently, the remaining eleven parties that negotiated the Trans-Pacific Partnership Agreement will meet in the next ten days in Japan to decide how to resuscitate the deal.

New Zealand under National, with Australia and Japan, have spearheaded demands to leave the original text virtually unchanged, while suspending a small number of provisions unless and until the US re-joins.

All three parties in the new government wrote minority dissents in the select committee report on the original TPPA, when it still included the United States.

Labour is committed to ban overseas speculators from buying existing residential properties. A genuine ban would mean revisiting New Zealand’s investment schedule in the TPPA, as well as those with South Korea and Taiwan, with flow on effects to the China FTA.

Last night Winston Peters reiterated NZ First’s opposition to the rights of foreign investors to sue the government in controversial offshore tribunals, pointing to options in the Singapore NZ FTA that Labour negotiated in the early 2000s.

Professor Kelsey points out that the new government will have to agree on a position and brief its negotiators within the next few days, not just on the TPPA, and remember that they all called for greater openness.

‘Right now New Zealand’s negotiators are in Incheon, South Korea, pursuing National’s mandate at the latest round of negotiations for the 16 party RCEP. That includes rules on investment, which all three parties seem to agree must change.’

‘Next week’s meeting in Japan is meant to finalise options on the future of the agreement so their trade ministers or leaders can make a decision when they meet on the margins of the APEC in Da Nang, Vietnam from 5-11 November’, Professor Kelsey said.

‘That will put Prime Minister Ardern and New Zealand First under the spotlight. They cannot deliver a new direction for the economy and greater control of our regulatory decisions, including on investment, unless they substantially change New Zealand’s approach to these agreements.’

‘The best option is not to be rushed into any decisions. The government should step back and take the time to analyse, consult and revisit the defective approach of the past decade.’