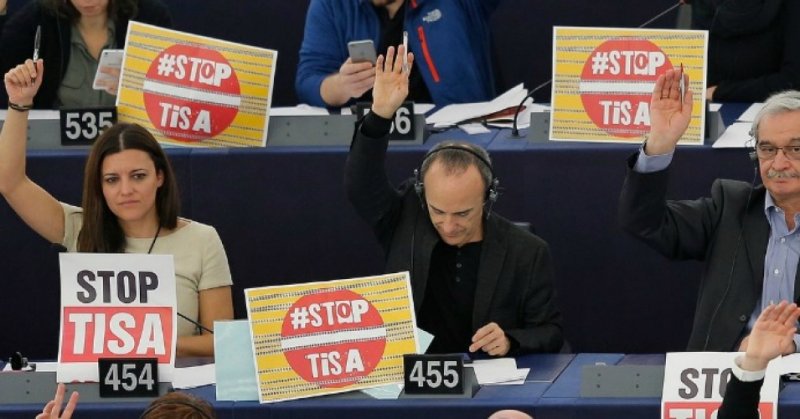 Members of the Confederal Group of the European United Left hold posters with the slogan ‘Stop Tisa’ (Trade in Services Agreement) during a voting session at the European parliament in Strasbourg, France. (Photo: Vincent Kessler /Reuters)

Newly published leaked documents from the top secret Trade in Services (TISA) negotiations reveal the wide scope of the deregulatory agenda and attack on democratic governance at the heart of the negotiations.

The TISA negotiations currently involve 23 countries calling themselves "The really good friends of services", with a rich core including the US, EU, Japan, Canada, Australia, New Zealand, Switzerland and South Korea driving the process. The goal is to bring the agreement into the WTO, where the rules would eventually become binding on all members.

The latest leaks detail the European Union "requests" to Chile, Colombia, Costa Rica, Hong Kong, Israel, Japan, Korea, Mauritius, Mexico, Pakistan, Panama, Peru, Taiwan and Turkey. They are clothed in technical language which can obscure their implications and provide only a partial window into the negotiating process, because so many other negotiating texts remain under lock and key. But read in conjunction with the other TISA documents which are now publicly accessible, they highlight the wide-ranging threat to governments’ capacity to regulate in the public interest to defend workers, citizens and the environment.

The EU demands include requests to eliminate restrictions on transnational service activity and investment at every level down to the local, which denies governments at all levels the ability to regulate services in order to pursue development or other policy goals. The demands go well beyond current WTO rules in limiting governments’ capacity to impose performance requirements (e.g. local content, employment, training or technology transfer) on foreign investors. The previously leaked draft text on financial services contains provisions which would seriously restrict efforts to regulate the crisis-prone financial sector through new laws or regulations aiming to reduce volatility and encourage productive investment rather than speculation. And because the treaty process operates on a ’negative list’ basis, TISA potentially opens up all services to transnational investors with few or no conditions imposed.

"The latest revelations from the TISA negotiations are no surprise", said IUF General Secretary Ron Oswald. "The negotiating agendas of the countries driving the process have been clear from the start, and are echoed in TISA’s flanking treaties TPP, TTIP and CETA. It’s time to halt the negotiations, publish the secret texts and ensure the widest possible public debate to expose the full extent of the threat these treaties pose to democracy and the labour movement."

A joint statement from international trade union organizations including the IUF calling for a halt to the negotiations and full publication of the negotiating texts is available here.