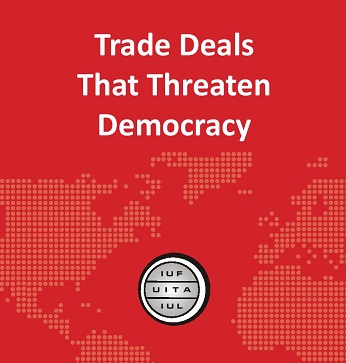 No to trade deals that threaten democracy!

Usually we write you with very concrete requests to support workers fighting for their rights in specific conflicts. We know from experience that messages can make a difference, and we appreciate your continued support and solidarity.

If these treaties come into force, they will weaken elected government and strengthen corporate power at all levels. They must be defeated, and popular pressure can do this, just as it stopped the Multilateral Agreement on Investment and the Free Trade Area of the Americas.

A new IUF publication, Trade Deals That Threaten Democracy, exposes the corporate power grab at the core of these two mega-treaties, how they build and expand upon the toxic web of the thousands of investment treaties which have been layered on to the WTO rules and why the labour movement should throw its full support behind the growing movement in outright opposition to these deals.

You can download the brochure here. We urge you to read it, distribute it, spread the word in your unions and in your communities, and tell your political representatives "No to trade deals that threaten democracy!"