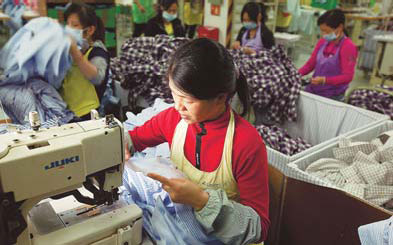 A clothing factory in Shenzhen, Guangdong province. Delegations from China, South Korea and Japan have met six times to discuss the possibility of a free-trade area. Forbes Conrad / Bloomberg

CHANGCHUN - A free-trade area (FTA) among China, Japan and South Korea would bring enormous benefits to the regional economy, but it will take many years before such an agreement can be signed, officials and experts said on Wednesday.

"It would be good if the three parties can reach a concrete consensus within three to five years," said Zhao Yumin, a researcher at the Chinese Academy of International Trade and Economic Cooperation affiliated with the Ministry of Commerce.

Delegations from the three East Asian powerhouses are holding a three-day meeting for joint study of the possible FTA, with government officials, academics and industry figures in attendance.

It is the sixth meeting of its kind since 2010 and the three countries are scheduled to hold the last of their gatherings in Seoul, South Korea in December.

A participant at the meeting, who declined to be identified, said it may take 10 years for the countries to sign a free-trade agreement.

Moreover, although the three parties agreed to complete a joint study by the end of this year, it is still too early to predict that formal negotiations will start next year, said Zhang Xiaoji, senior researcher at the Development Research Center of the State Council.

"The parties are all very cautious, especially considering the unstable political situation in Japan," he said. "I don’t think there’ll be any trouble in completing the joint study as scheduled, but it is hard to say when the formal negotiations will begin."

While participants acknowledged the great potential for closer links in trade and investment among the three countries, they expressed concerns that it will be a hard nut to crack.

Yu Jianhua, China’s assistant minister of commerce, said: "China, Japan and South Korea have great potential to further expand our trade and investment in terms of wider coverage of areas and building a closer economic partnership."

If established, the FTA would boast a consumer population of 1.5 billion. The macroeconomic effects in terms of GDP growth would be 5.14 percent for South Korea, 1.54 percent for China and 1.21 percent for Japan, according to an earlier study organized by the Korea Institute for International Economic Policy.

"The significance of an FTA is not limited to the scale of market," said Zhao. "It would help to bridge differences in other areas, such as security and politics, among the three regional powers."

Due to different levels of development, however, an FTA would have a negative impact on a number of sectors in each of the countries, prompting opposition from domestic interest groups, analysts said.

"I think time is very, very pressing (for the three parties to complete the joint study by the end of this year)," said Kim Young-moo, head of the South Korean delegation. "We have a heavy burden on us," he said.

An extra meeting may be held before the Seoul conference in December to ensure the joint study is completed on schedule, he said.

Leaders from China, South Korea and Japan have agreed to complete the study by 2012.

Ding Qingfen contributed to this story.