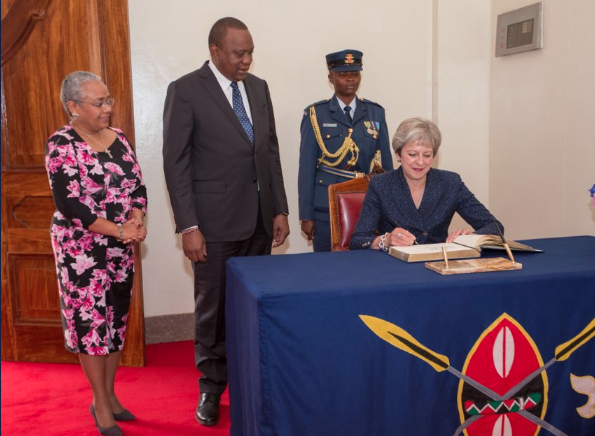 Not much to gain for Kenya, Africa in post-Brexit trade agreements

United Kingdom Prime Minister Theresa May’s three-day whirlwind tour of sub-Saharan Africa on a mission to strengthen Britain’s post-Brexit trade and investment may not offer much to the continent after it became apparent that the UK will be planning to roll over "copycat" European Union agreements with African nations.

In her first stop in South Africa, the Prime Minister announced plans to carry over the European Union’s Economic Partnership Agreement (EPA) with the five member Southern African Customs Union (Sacu) once the EU’s deal no longer applies to the UK.

“I am announcing an additional $5.2 billion of UK investment in African economies, with the hope of further matching investment from the private sector to come. I’m also delighted that we will today confirm plans to carry over EU’s Economic Partnership Agreement with the Southern African Customs Union and also bring in Mozambique, once the EU’s deal no longer applies to the UK,” PM May said, adding that she is planning to push UK to be the G7’s number one investor in Africa in the next four years.

For the region, this comes as an anti-climax given that it had hoped that the visit would be part of an attempt at a new African trade deal.

It had been hoped that her visit to Kenya would push for improved trade relations, given that the share has been declining continuously for both countries.

In July, the UK Trade Commissioner for Africa Emma Wade-Smith said that post-Brexit, Britain would push for lowering of tariffs to ramp up the low UK-African trade numbers.

“Post-Brexit, I believe we will have discussions on reduction of reducing barriers to trade so as to address these trade imbalance concerns that some of these countries have raised. We will be able to have an independent trade policy that offers room for a lot of improvements in the trading agreements that countries will seek,” Ms Smith had said.

However, UK Africa Minister Harriett Baldwin confirmed that the tariffs on African goods post-Brexit will be similar to how they are now, which basically means a rollover from what the EU has been offering.

“We aim to be at least as strong as we are now in terms of the economic partnering arrangements with the African countries. I think there is enormous scope for us to be at least as good as we are now and that there are opportunities for us and African exporters to benefit from our decision to leave the EU. We should be ambitious for seeing how we can benefit both our consumers and African exporters given that they produce fantastic fruit and vegetables that we don’t grow,” Ms Baldwin said.

Much of the region’s exports to the UK are enabled by two preferential arrangements; the EU standard Generalised System of Preferences (EU-GSP) and the Everything But Arms (EBA) initiative.

Currently, Kenya and Rwanda have a high dependence on the UK market, with Nairobi seeing almost 30 per cent of its EU exports heading to the UK, while Kigali has close to 20 per cent.

Once Brexit becomes a reality in December 2020, the UK will no longer be bound to extend the two EU preferential trade arrangement schemes (EU-GSP and EBA) to the East African Community and this is why Kenya and Rwanda have been lobbying for new negotiations, so that the UK can consider offering a unilateral scheme to the EAC, comparable to market access provisions guaranteed under the current EU-EAC EPA scheme.

Kenya lost out on the EBA initiative as it targets Least Developed Countries, which it is not.

“As we prepare to leave the EU we will ensure continuity in our trading relationship with Kenya, ensuring that you retain your duty-free, quota-free access to the UK market,” PM May said.

For Kenya, this "rollover" could be disappointing given that it has been on the losing end with regards to trade with the UK in the region, even as stiff competition from its regional neighbours Rwanda, Tanzania and Ethiopia contributed to its current trade imbalance with the UK.

However, Nairobi and also the EAC were angling to renegotiate its trade deals post-Brexit discussions and this new move by the UK could complicate the matter.

“Our exports to Britain, which are highly dominated by beverages and cut flowers, have dropped from 16 to seven per cent, but I hope with the ongoing negotiations, we will make very good mutually beneficial trade relationship and boost these numbers. We must ensure our trade negotiation is strengthened during the post-Brexit discussions so that we can address the falling trade numbers,” Kenya’s International Trade Principal Secretary, Dr Chris Kiptoo, said.

Data from the International Trade Centre (ITC) shows that in terms of goods trade, Kenya and the UK are evenly stacked, with the 2017 Kenyan exports to the UK standing at $372 million, against imports from the UK of $300 million. However the share has been declining continuously for both countries.

“The UK government is clearly pushing for greater integration in African trade, the EAC needs to build greater regional co-operation thereby harnessing various strengths, to be able to export to the UK as a bloc.

With a growing population and increasing per capita income, the EAC is definitely going to be a key player going ahead for the UK for trade and investment,” Aarti Krishnan, an economist at the Overseas Development Institute said.