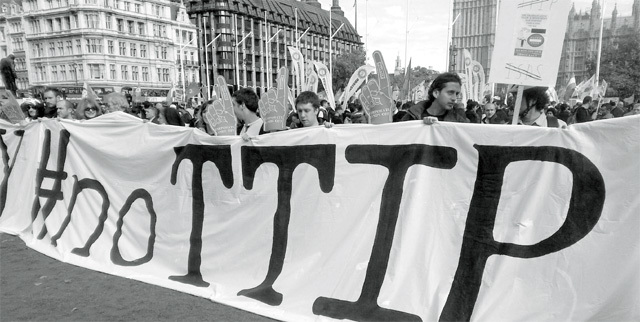 EU unions are already warning that Mexico is a major worry.

Having recently driven through the ‘fast track’ legislation needed for President Obama to get through the US Pacific Rim free trade deal known as TTP, the US trade representative has vowed to speed up the negotiation between the US and EU to secure the TTIP trade deal before Obama’s term of office ends.

Many European trade unions backed the US trade union movement in its all-out campaign to stop ‘fast track’, which gives Obama the ability to push through trade deals without line-by-line scrutiny from US legislators. US unions say fast track will now cover TPP, TTIP, TiSA and others in the offing.

These new trade deals have been described as ‘turbo charged neo-liberalism’, which will effect employment rights, rights to collective bargaining, threaten sovereign government’s ability to pass pro-worker legislation and the right of governments to take into public ownership utilities and social organisations.

An agreement between Canada and the EU known as CETA has been initialled and is opposed by many EU trade unions and the Canadian labour movement. However, the EU expects to sign the CETA deal sometime this year or early 2016.

This agreement has slipped silently by public attention, but is highly dangerous as the employment protection clauses demanded by unions have been watered down to little more than a ‘strongly worded report’. Meanwhile the ISDS mechanism, which is being fought strongly by Labour MEPs in the European parliament, is in place in the CETA deal.

A vigerous campaign has been waged against TTIP by EU trade unions – although some unions, notably in Scandinavian, say they are in favour the CETA and TTIP deals as they hope it will expand their countries’ opportunities to export and trade.

However, unions such as Unite and the United Steelworkers in the US and Canada have warned that their hard fought for and cherished social, employment rights and sectoral collective bargaining system may be undermined by these new trade deals.

EU unions including Unite, the TUC, and the ETUC – as well as Labour MEPs – backed US unions such as the United Steelworkers, the Autoworkers and the AFL-CIO in their opposition to TPP and ‘fast track’, as they were able to clearly explain the effects of free trade deals on their economy.

The US suffered massive job losses notably in manufacturing since Bill Clinton signed the North America Free Trade Agreement with Canada and Mexico. US unions say over 600,000 decent jobs have been lost because of NAFTA, many of them sucked down into cheap labour zones in Mexico.

On the horizon, too, is TiSA, the 24-party Trade in International Services Agreement, which involves three-quarters of the United States’ gross domestic product and two-thirds of the world’s services, such as banking and communications.

Not surprisingly, EU and US unions are opposed to TiSA. More recently the EU trade minister Celia Malmstrom said she wants to push ahead on trade deals with Mexico and Japan.

EU unions are already warning that Mexico is a major worry. The Mexican government is hard-line anti-union and encourages companies to set up ‘yellow’ or company ‘in-house’ unions which provide little or no support to workers are run the company line.

Successive Mexican governments have attempted to break independent trade unions with arrests and false accusations of wrong doing – notably against the metals and mining union Los Mineros, whose leader Napoleon Gomez runs the union Los Mineros from United Steelworkers offices in Canada. Despite being cleared of trumped up charges by the right-wing Mexican government, Gomez feels he will face arrest if he returns to Mexico.

Also coming down the line after TTIP, CETA and TPP is the World Trade Organisation’s Information Technology Agreement (ITA), which covers about 97 per cent of world IT trade and the Environmental Goods Agreement, (EGA) accounting for 86 per cent international commerce in green goods.

All of this would not been possible if ‘fast track’ had been rejected by Congress. As it is Obama needs only to submit trade agreements to Congress for straight ‘up-or-down’ votes without any amendments.

Froman has claimed: “A lot of opposition we heard during this debate on TPP was based on myth and misinformation. I can’t wait for this thing to be done and fully out there in public to say, ‘We told you this was going to have fully enforceable and binding labor obligations’, and it does.”

But US and EU unions are clear that this is not the case. The US has not ratified the main ILO Conventions on the right to form unions, the right to strike and the right to collective bargaining and will not have them in its trade deals.

Others too have doubts about the US administrations ability to deliver early on TTIP. “Getting TPP on this administration’s watch is probably the best that they can hope for,” said Dan Ikenson, the Cato Institute’s director of trade policy studies.

“TTIP – I just think no way. Clinching the environmental goods and the international services pacts could be possible by 2017, but that depends on countries making credible offers to open their markets, and the signs have been mixed on that,” Ikenson added.