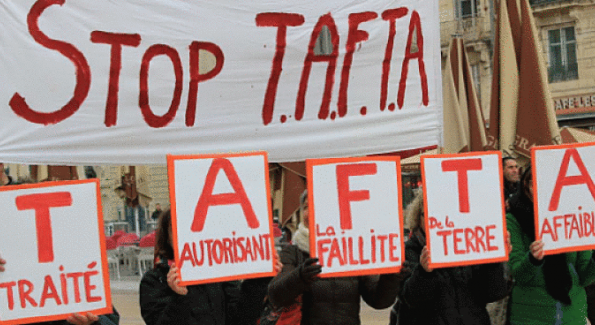 Obedience: Hereafter, the US will have the final word on European laws!

Translated by Anoosha Boralessa (23 March 2016). Not reviewed by bilaterals.org or any other organization or person.

Freedom – it is the ability to collectively choose our destiny. Liberty, by definition, can only be conceived and expressed within a framework that respects sovereignty.

This sovereignty can be national; theoretically, it could even be European, provided Europe is, quite rightly, something other than a propaganda tool to ensure, at best, our submission to American interests, which for a long time are no longer the interests of the American people but those of commercial totalitarianism that takes the form of “big business” and predatory multinationals, as well as men, souls or resources.

It is the British newspaper, The Independent, (whose very name must still mean something), which has released information, disclosing a document obtained by an independent action group, Corporate Europe Observatory (CEO) during negotiations between the European Union and the United States on the Transatlantic Trade and Investment Partnership (TTIP).

“The latter revealed that an unelected commission will be set up: it will have the power to decide which areas cooperation with Washington should take place, thus bypassing EU member states and the European Parliament.

The main objective of the TTIP is to harmonize transatlantic rules in a range of domains, including food safety and consumer products, environmental protection and financial and banking services.

This document shows a labyrinth of procedures that could silence all EU proposals going against US interests. So the action group considers.

According to the procedures revealed by the document, the US regulatory authorities will have a “questionable rôle” in the EU legislative process and will therefore weaken the European Parliament.

Nick Dearden, the director of the British action group, Global Justice Now, declares that it is “shocking” that the US can obtain the power to challenge and modify European regulations before European politicians have the chance to discuss them”.

The Transatlantic Treaty is actually the death of the entire European idea!

I am distressed by the silence I hear.

I am distressed when I see “European progressives” constantly “whining” about Europe without understanding that such a treaty is the death of the entire European idea; that this treaty is the angel of death for the entire sovereignty of Europe or still the disappearance of the concept of the Federation of European Nation States, which many conceived as the “United States of Europe”.

Europe weakened, divided, submissive, totally exposed, is nothing more. Incapable of us dreaming, imagining a common destiny, there is nothing else to do other than dismantle these structures before they produce their destructive effects. For in Europe, the old continent steeped in history, when things turn ugly, generally they do not end well at all and we embark on the path without putting up a fight.

On such a subject, on such a treaty, on such provisions, we would need to have from right to left, in France and elsewhere, a European Union obviously of all citizens, political forces and trade union forces, a union of those that believe in a Sovereign Europe as well as those that reject it. This is because in all cases, such a treaty is the very denial of this notion of sovereignty: whether one conceives it in relation to a single nation state or as the United States of Europe. In either case… it is submission, desertion, resignation.

This treaty will rubber stamp our delivery into slavery; not slavery at the hands of the United States, but big corporations, who knew how to take control of the American political class using corruption, money and the power of the media.

Before your eyes you see commercial totalitarianism advancing. The problem is that it is multiform, transnational; that it lacks an active army, a leader or a political party; and yet, it is a totalitarianism just as dangerous and as violent as all the others.

Its immense force lies in the fact that it is not “personified”. However, it exists in the form of,a parasite housed in healthy hosts and gradually changes their behaviour. These hosts, which were initially healthy, are political organizations, NGOs, media or of course, nations and states whose policy and actions no longer serve their communities and people but the financial interests of a tiny minority.

Faced with such an enemy which is, without doubt, the most fearsome that we have had to face (because it goes forward under a façade, and clad seductively penetrates others), we must not be discouraged but tirelessly denounce it and raise awareness about it. This war against this totalitarianism will not be won with weapons but with words. It will only be possible to secure victory through ideas that we need not abandon. These ideas of liberty, the nation, sovereignty and also democracy, justice and law do not have to be appropriated by the euthanasia of thought and insults of the “self-righteousness”, other tools of this commercial totalitarianism which has to abolish the obstacles on the road to its expansion.

All those who consider liberty, justice, democracy and the nation a framework for expression are evidently those that will put a halt to this totalitarianism in motion.

Let us not despair, “the night will end”.

As you wait my dear friends, prepare yourselves. It is already too late!