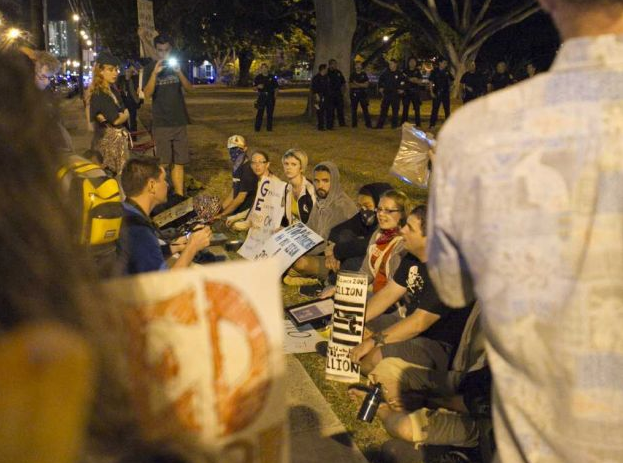 The Occupy Honolulu General Assembly formally asserts our opposition to the Asia-Pacific Economic Cooperation (APEC) meetings to be held here in Honolulu from November 7 – 13, 2011.

Although the decisions and proposals of APEC are technically non-binding, their positions are taken to the World Trade Organization (WTO) where trade policies are designed to enforce them.

APEC 2011 will be discussing and finalizing the Trans-Pacific Partnership (TPP). The TPP, like NAFTA before it, is designed to promote corporate interests despite the negative effects of “free trade” policies on the majority of the world’s people as well as the world’s natural resources. In contrast, Occupy Honolulu stands with the 99% and believes that people’s needs must come before corporate greed. We believe that the natural environment must be protected for the next generation.

We believe that the interests of people and the environment cannot be met if economic policies are designed solely with corporate interests in mind. Other voices need to be heard, particularly from the people and organizations who witness the negative effects of current policies and from those who are working on alternatives. We will stand with other local organizations speaking out against APEC and will be in the streets to spread our message that another world is possible.

Under the guise of “free trade,” corporate-centered policies, APEC enables dominant economies like the United States to force foreign investment and control onto the economies of oppressed countries because their local industries cannot possibly compete with international corporations and the conditions for a free competition market are not met.

Workers are also often forcibly dissuaded from unionizing. Small-scale, sustainable agriculture is destroyed and replaced by corporate agribusiness. If APEC is allowed to proceed as desired, it won’t be long before we’ll see the effects here in Hawai’i as well. Under the trade policies advocated by APEC, local procurement laws such as encouraging “Made in Hawai’i” labels for local goods would be prohibited. In addition, big business would have greater access to exploit island resources for their own profit.

This has the potential to cause destruction to the precious resources of our ‘āina which will negatively affect the lives of local residents while also leading to a reduction in tourism and damage to the local economy. We must raise our voices now before it is too late. Occupy Honolulu believes that the neoliberal trade policies advocated by APEC, and the privatization and deregulation they will bring, will only benefit the 1%. We believe that alternatives exist which would benefit all people, not just a few.

It is these alternatives that we promote in solidarity with the 99%. We believe diverse local economies must be allowed to flourish and should be encouraged to develop sustainable business, instead of allowing multinational corporations to dominate the global markets.

“Free trade” policies also have devastating effects on the natural environment. APEC’s business-oriented perspective encourages deregulation and privatization of the world’s natural resources. As a result, corporations are able to push destructive forms of energy including nuclear, coal, oil, natural gas, and hydro despite the environmental degradation they cause instead of more sustainable energy options such as solar and wind. The world’s forests are also in danger. 64% of the planet’s Frontier Forests are located in APEC member countries and are home to globally significant amounts of biodiversity.

These Pacific Rim forests are crucial in preventing climate change. However, the neoliberal trade policies advocated by APEC put these forests in danger of privatization and potential destruction. Because of the rapidly expanding markets developed by “free trade” policies, APEC countries will likely be unable to develop responses quickly enough to prevent the environmental devastation these policies will create. Occupy Honolulu believes that the natural environment must be safeguarded for the next generation.

Trade policies must not be used as an excuse to destroy the planet’s already limited natural resources. We believe not in “free trade,” but in “fair trade” that creates ethical trade policies that regulate corporations to ensure that they operate in ways that protect both our natural environment and the rights of workers.

Occupy Honolulu stands with millions of others across the world who recognize the injustice of the neoliberal trade policies advocated by APEC and the WTO. Thousands have protested past APEC meetings across the world including in Korea in 2005, Australia in 2007, Peru in 2008, and Japan in 2010. Hawai’i was likely chosen as host for APEC 2011 due to its highly isolated location that will prevent massive protests from taking place.

Occupy Honolulu will not allow APEC to meet in silence. Archbishop Desmond Tutu once said: ““If you are neutral in situations of injustice, you have chosen the side of the oppressor.” Occupy Honolulu will not allow injustice to go unnoticed. We will stand in solidarity with our brothers and sisters around the world to raise our voices against the unjust policies advocated for by APEC. We will raise our voices against corporate control of government policy. We will not allow business to go on as usual. Instead, we will work within our communities to develop locally-based, sustainable alternatives to set the foundation for a new and better world.

Occupy Honolulu is also greatly concerned about the local response leading up to APEC. The City & County of Honolulu has budgeted $45 million for security alone. The Honolulu Police Department is working in secret with the Department of Defense, Homeland Security, and FBI to develop buffer zones and other security tactics to stifle free speech.

We are also troubled to learn that there are plans in place to “sweep” the homeless from their normal abodes in order to maintain appearances for the APEC meeting and its participants. In a difficult economic climate, Occupy Honolulu believes this money would have been much better suited for education and social services. We will not allow fear tactics to keep us quiet. In the face of repression, we will find creative ways to make our voices heard.

We will protest peacefully and we hope that our rights to freedom of speech and assembly, which are protected by the first amendment, will be respected. We hope that the police will not react in violence as they have in recent days against our brothers and sisters in Occupy Oakland and other cities. We hope that the recently purchased $700,000 worth of “less-than-lethal” weapons such as tear gas, pepper spray, and rubber bullets will not be used against peaceful demonstrators.

Occupy Honolulu calls upon all members of the 99% to join us. We must speak out for our brothers and sisters around the world who will be negatively affected by APEC’s neoliberal trade policies. When injustice becomes law, resistance becomes duty. APEC is the 1%. Please spread the word and please be in the streets with us on November 7 – 13.