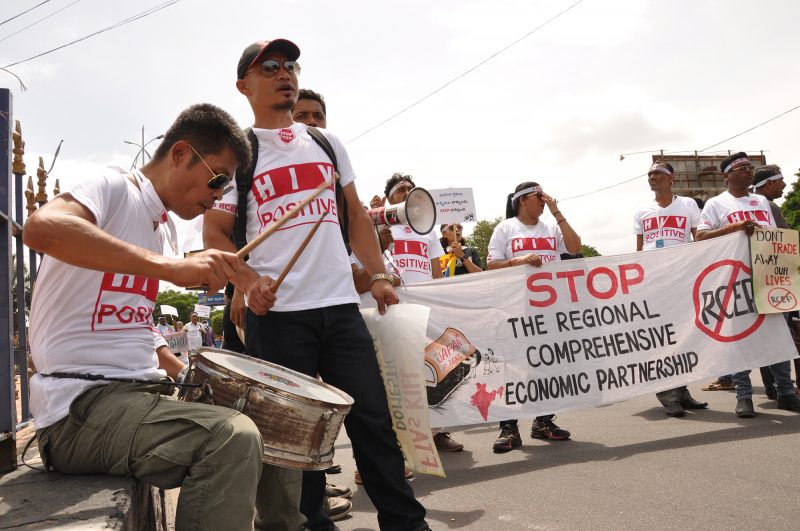 Old wine in new bottles: Keep TRIPS-plus provisions out of the RCEP FTA! By by Chalermsak Kittitrakul (Project Manager of the Access to Medicines Campaign at AIDS Access Foundation in Thailand, and FTA Watch’s Coordinator)

Intellectual property barriers, which would hinder access to affordable medicines, have supposedly been removed from the draft RCEP free-trade agreement (FTA). However, tactics that prevent the entry of cheaper, generic producers are still very much a part of the negotiations – they are presented in a different way, but the impact could still be costly for patients.

Despite the fact that certain problematic provisions concerning intellectual property (IP) barriers and access to affordable medicines in the ongoing RCEP trade-agreement negotiations have been suspended in the recent rounds, AIDS Access Foundation (AAF) and FTA Watch continue to have grave concerns over the IP enforcement chapter that has been introduced.

Both organizations, on behalf of Thai civil society groups, attended a debriefing meeting on the negotiations on 13 June 2019, hosted by Thailand’s RCEP chief negotiator. During this debriefing, civil society delivered comments on the IP enforcement chapter, in relation to the leaked draft text, and presented a letter detailing CSOs proposition.

IP barriers like patent-term extension and data exclusivity, which allows for the patent protection period to exceed the World Trade Organization’s (WTO) standard of 20 years and prevents the generic-drug industry to use the test data of efficacy comparison to file for market approval, have been removed from the trade-deal talk due to its impact of delaying competition of generic medicines and the resulting exorbitant prices of life-saving drugs. However, we found that IP enforcement is still in the draft text. This provision allows customs officers to seize and detain shipments of generic medicines in transit to destination countries, which can be suspended on ‘suspected grounds’ of patent, trademark or copyright infringement.

Seizures of 17 consignments took place in the Netherlands and Germany during 2008 and 2009. They were shipments of raw materials and finished products of medicines used for treatment of HIV, cardiovascular diseases, and mental health, being delivered from India and China to countries in Africa and Latin America. The European customs officers claimed that they were suspended due to infringed patents and/or trademarks in Europe or that they were suspected to be counterfeit.

Why were customs officers in Europe able to confiscate life-saving generic medicines that weren’t marketed in Europe and didn’t violate any IP protection in the destination countries? It wasn’t the job of the European customs officers – who have no expertise in patents nor in public health – and the claims were not something that could be ‘seen’ in this way at the border.

By proposing IP enforcement in the RCEP deal, the developed countries will again have a way to stop legitimate drugs in transit, export and import in the way we’ve seen take place in the Netherlands and Germany, whereas the WTO’s TRIPs Agreement (Article 51) allows suspension of imported counterfeit trademark or pirated copyright goods. In addition, AAF and FTA Watch are concerned that by allowing IP enforcement it will limit decisions of the court during IP infringement disputes between ‘Big Pharma’ and the generic-drug industry. The court rules on monetary compensation demanded by the rights holders. This allows ‘Big Pharma’ to manipulate the rules and hinder generic companies’ competition by demanding disproportionate and unreasonable compensation.

TRIPS-plus IP enforcement measures, particularly the border measure, have been introduced in many trade-deal negotiations. It is an old trick that developed countries have applied many times: Thailand-USA FTA (2003-2006), Thailand-EU FTA (2013-2014), and Anti-counterfeiting Trade Agreement (ACTA) (2008-2011).

In exchange for lowering tariffs, the countries with more bargaining powers demand that we weaken our laws and policies and limit, or even remove, our legal safeguards used to protect our public health and the public interest, in order to protect the interest of their industries at the detriment of our public health interests. Allowing IP enforcement like this will create a chilling effect, ‘scaring off’ the generic-drug industry and discouraging their willingness to compete with the giant drug firms. They won’t want to take the risk of having their products confiscated or being sued.

Hypocrisy with OUR health

The developed countries in the RCEP negotiation are demanding the same requirements as they signed with the European Union (EU), while, in contrast, the European Parliament rejected such an offer in the ACTA negotiation. The ACTA was first introduced in 2008 to address counterfeiting in the commodity trade. However, the draft agreement wanted to include the border measures that allowed seizure of goods in transit and the extension of the definition of “counterfeit” goods, to cover both falsified and substandard medicines and drugs that infringe IP rights. The European Parliament, voting 478 – 39, refused to join in the ACTA in 2012 based on it being a TRIPs-plus measure that impeded the competition of generics, which play a significant role in making essential medicines affordable.

This was hypocrisy on the side the EU. On the one hand, the European Parliament rejected the ACTA deal in order to protect European citizens so that quality and affordable generic medicines weren’t blocked. On the other hand, the EU proposed the border and IP enforcement measures, as demanded in the failed ACTA, to Thailand.

Old wine back on the table

When the Thai-EU FTA negotiations were proceeding in 2013-2014, Thailand had Section 190 of the 2007 Constitution which assured transparency and good governance of any international agreement negotiations. It required the Thai government to conduct health impact assessments and nationwide public consultations before or during the negotiations. The negotiation frameworks had to be approved in Parliament and the progress of the negotiations had to be reported to Parliament on a regular basis.

During this time, Thailand held nationwide public hearings, which was unprecedented, and conducted comprehensive studies on impact of the Thai-EU FTA. The outcomes from the active participation of the public and the research, was shared during debriefing meetings. These meetings provided a policy dialogue space for all the stakeholders to provide their concerns and recommendations to the Thai negotiating team. This backed up the negotiating team, enabling it to insist on Thailand’s “No TRIPS-plus” position.

But Section 190 was later removed – it disappeared in the interim 2014 Constitution and the current 2017 Constitution, when the coup d’etat government stepped in and took over the country in May 2014.

It means that the legal mechanisms assuring transparency and good governance by the public are no longer in place. People’s freedom of speech and political expression have also been limited. Civil society believes that the EU will take advantage of our country’s democracy regressing and that the EU will place the same old TRIPS-plus provisions back on the table, as they demanded six years ago. It’s very challenging for us.