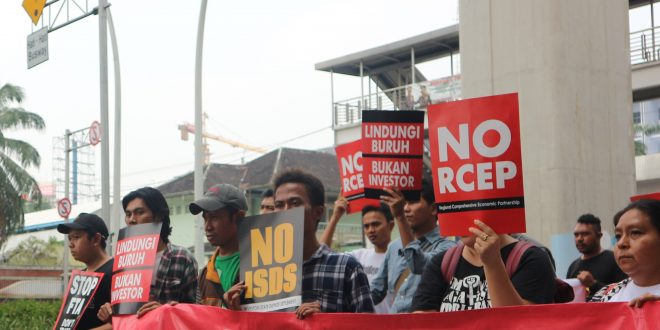 Open letter demanding the release of the RCEP text

On 4 November 2019 leaders of 15 countries in the Asia Pacific region announced the conclusion of the text-based negotiations for the 20 chapters of the Regional Comprehensive economic Partnership (RCEP).

In the Declaration from the Summit, governments stated their intention to sign the RCEP in Vietnam in early 2020.

Representatives of workers, farmers, women, indigenous peoples, environment, public health and patient groups, and other civil society organisations have repeatedly and consistently expressed our concerns about the negative effects that RCEP will have on people’s livelihoods, jobs, access to medicines, public services and the climate crisis and on economic development, democracy and national sovereignty.

We have also condemned the refusal to release negotiating texts of the agreement to allow the 3 billion people who will be affected by the RCEP to evaluate its impacts from our contexts, locations and perspectives.

Since the 4 November announcement, governments have, collectively and individually, provided their own accounts of what the agreement says and how it will affect our countries and people. But they are keeping the text itself secret.

We note that many parties to the RCEP had released the un-scrubbed text of the Trans-Pacific Partnership Agreement prior to signing and that the draft text of the free trade agreement between Japan and the European Union was released before the negotiations entirely concluded.

We demand the immediate release of the agreed RCEP text for independent evaluation and scrutiny by the people, our elected representatives, and relevant public bodies.

Failure to do so will continue the affront to democracy and deepen public scepticism about claims regarding the value and positive impacts of RCEP.