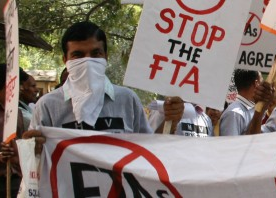 Don’t trade our lives away!

We are writing to you on behalf of the Delhi Network of Positive People (DNP+) and International Treatment Preparedness Coalition- South Asia (ITPC-South Asia), organisations working with people living with HIV and HCV with an aim to achieve universal access to treatment and care.

The 15th round of negotiations on the Regional Comprehensive Economic Partnership (RCEP) is going to be held in China (17 – 22 October). This trade deal threatens to undermine the ability of some of the world’s poorest people in Africa and Asia to gain access to more affordable medicines.

The negotiating text includes heightened intellectual property (IP) provisions that endanger countries’ efforts to ensure access to medicines and run counter to their human rights obligations. India’s inclusion in the agreement is cause for particular concern.

Generic competition from India and supply of active pharmaceutical ingredients (API, raw material) from China has led to affordable, life-saving medicines, which have been instrumental in bringing down the price of first-generation HIV medicines by 99% in the past ten years. In 2016, this key factor has allowed developing countries to scale up their HIV/AIDS treatment to an estimated 17 million people. Competition and supply of low cost generic medicines is now recognised as a cornerstone in improving universal health coverage in many developing countries.

We call on you to communicate our concerns to your government and your negotiators regarding the inclusion of harmful provisions in the RCEP agreement that could jeopardise access to lifesaving, affordable medicines. Millions of lives across the developing world are at stake in this trade deal. We highlight four key concerns:

We clearly request TRIPS-Plus provisions – damaging to early introduction or blocking registration of affordable generic medicines such as patent term extensions and data exclusivity – to be removed by Japan and South Korean negotiators. These have been repeatedly rejected by India – known as ‘the pharmacy of the developing world’ for its export of affordable generic medicines –from the proposed text [1]. We hope that Australia and New Zealand will stand by India and ASEAN on their position against TRIPS Plus clauses and not allow Japan to bring these back into the discussions (directly or indirectly) with their negotiators. These provisions go far beyond existing international agreements in their impact on access to medicines—including the WTO Agreement on Trade-Related Aspects of Intellectual Property (TRIPS) and pose a serious threat to India’s ability to continue producing and supplying life saving medicines for emerging public health challenges including drug-resistant tuberculosis, viral hepatitis, non-communicable diseases and anti-microbial resistance to governments and millions of patients across the world.

The draft RCEP text on ‘IP enforcement’ omits several procedural guarantees, safeguards and protections available under WTO trade rules and are a blank cheque for abuse, with numerous provisions that will prevent the flow of generic medicines from producer to patient. Even the controversial Anti-Counterfeiting Trade Agreement (ACTA) allows countries to exclude patents and test data from the scope of the civil and border enforcement provisions [2]. As an important safeguard measure we request your negotiators to consider the deletion of patents and test data from the entire scope of the enforcement section.

The RCEP draft Intellectual Property chapter may force LDCs (Cambodia, Myanmar and Lao PDR) to prematurely adopt patents and other IP barriers that block supply and registration of low cost generic medicines. It damages the credibility of Japan, South Korea, Australia and New Zealand, revealing their total disregard for the socio-economic constraints and needs of the poorest and most vulnerable segment of the international community – the LDCs.Under the TRIPS Agreement, countries classified as “Least Developed Countries” (LDCs) – in recognition of their economic, financial and administrative constraints and the need to procure or make low-cost medicines – have been granted a specific pharmaceutical transition period wherein LDCs do not have to apply or enforce TRIPS provisions concerning patents as well as test data protection, in relation to pharmaceutical products until 1 January 2033 and this deadline can be further extended. We therefore request that your negotiators protect the current transition periods and waivers vis-a-vis intellectual property granted to LDCs as well as any further extensions of these transition periods and waivers by the WTO. In addition, countries negotiating RCEP should not impose TRIPS-plus obligations on LDCs [3] even if they transition to being classified as middle income countries as they will for the foreseeable future continue to face socio-economic constraints in providing universal healthcare and meeting the treatment costs of their people.

We would also like to draw your attention to the negotiations on the investment chapter. As negotiations are likely to pick up pace on the investment chapter, we specifically request RCEP negotiators from your country to not extend the definition of investment to include intellectual property and to exclude the investor-state dispute settlement (ISDS) mechanism. If included in the trade deal, RCEP will be further expanding and supporting a mechanism for pharmaceutical corporations to sue developing countries like India and Thailand – outside of domestic courts in secret arbitration for millions of dollars – when it regulates monopolies in medicines in public interest. The inclusion of ISDS remains a serious threat against countries’ right to manage IP to protect of public health.

We really call on RCEP negotiating countries to ensure that this trade deal RCEP does not push for introduction of the above higher IP standards commonly called TRIPS plus measures in the region.

Given the fact that this mega trade deal will cover nearly 50% of the world’s population – including the most vulnerable, marginalised and impoverished – we really feel that all the member countries of RCEP have a moral responsibility to set an example among mega-FTA negotiations in prioritizing health over interests of the pharmaceutical corporations.

Further, we believe that given the significant public interest issues at stake, there is a need for greater consultation at every stage of the negotiations, transparency regarding the negotiating text to increase meaningful inputs from academics, legal experts, public interest groups working on public health on the IP and investment chapter.

As people living with HIV, we request all the RCEP negotiating countries not to pursue a free trade agreement that threatens our most basic of human rights – the right to health and life.

The Delhi Network of Positive People

[1] The negotiating text of the IP chapter was leaked online on 19 April 2016 and is now available http://keionline.org/node/2472.