OPEN STATEMENT TO EU TRADE COMMISSIONER ON THE EU-INDIA FTA

Who is the European Commission trying to mislead? 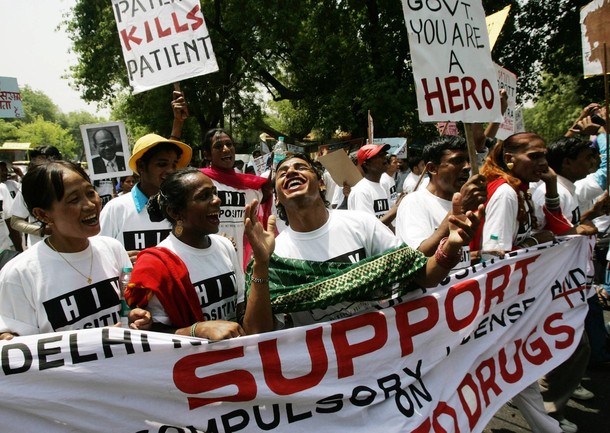 April 2007: The Delhi Network of Positive People (DNP+) and other organisations calling on the Indian government to support the decision by Thailand to issue compulsory licences on some patented drugs. (Getty Images)

New Delhi, 23 March 2010 - The Delhi Network of Positive People (DNP+) is calling on the EU Trade Commissioner to come clean on the demands and pressures being placed by the European Union on the Government of India to accept TRIPS-plus measures that will have a severe, adverse impact on access to safe, effective and affordable medicines in India and across the developing world.

On March 12, 2010, the European Commission, in a blatant attempt to mislead the public, press and millions of patients concerned about continued access to generic medicines from India, stated that, “it was not asking that India stop producing cheap generic medicines.”

The EU’s attempts to negotiate TRIPS-plus measures with India are well documented. For anyone looking for proof, one has to look only at the leaked text of the EU-India FTA negotiating texts to verify EU actual demands for data exclusivity, patent term extensions and border measures.

The provisions on intellectual property (IP) and enforcement in FTAs with developed countries are known to delay generic competition and impede trade in affordable generics between developing countries. See – ‘All costs, no benefits: How TRIPS-plus intellectual property rules in the US-Jordan FTA affect access to medicines’, Oxfam Briefing Paper, March 2007.

That the European Commission (EC) is representing the private interests of its pharmaceutical companies in pushing TRIPS-plus provisions in the FTA with India is evident. That in this quest they are even going against their own European Parliament resolutions and are issuing deliberately misleading statements is regrettable.

The EC should drop its pretence that it supports access to medicines and is concerned about the lives of patients in developing countries. The seizure of Indian generic medicines on their way to Africa and Latin America or the pressure on India to adopt TRIPS-plus provisions both highlight its indifference to loss of lives in developing countries like India. It only views it as a destination to sell its expensive wine and cheese to rich Indians.

As Indians living with HIV, we will not accept this attempt at re-colonization by Europe through a Free Trade Agreement that threatens our most basic of human rights – the right to life.