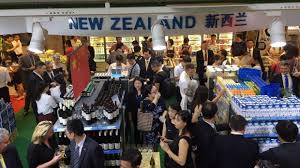 Over Labour weekend, a Chinese naval vessel sailed through Cook Strait and spent the weekend tied up in Wellington harbour.

Last week, the government issued a new defence policy paper that - unlike a similar document last year - was shorn of overt references to China’s aggressive pursuit of territory in the South China Sea and wider, sometimes questionable diplomatic and security aims in its relations with Pacific Island nations.

Just look across the Tasman, where Scott Morrison’s muscular support for US President Donald Trump and outspoken talk on the South China Sea, among other issues, has put Australia-China diplomatic relations in the freezer.

Speaking at the East Asian Summit, where he also met Premier Li, Morrison put it bluntly: "We are a liberal democracy. They are a Communist Party state."

Beijing had warned explicitly before the summit that Australia should not strain relations by continuing to criticise China’s human rights record, notwithstanding policies that include the incarceration in ’education camps’ of perhaps one million Uighur Muslims in western China as part of a surveillance state operation to stamp out political dissent in the region.

In the front line of possible economic consequences for Australia: reduced Chinese tourism and fewer Chinese students paying to attend university in Australia.

In the smallest of ways, New Zealand being granted an FTA upgrade right now rubs it in to Australia that only those who play nicely with China can expect rewards.

The fact that the upgrade was happening was a little gift from Beijing to then Prime Minister John Key at the 2016 APEC Leaders’ Summit in Peru, just days before he stunned New Zealand politics-watchers by stepping down rather than fight the 2017 election.

Three years later, with the rules-based international trade order fraying dangerously, China and New Zealand signing the upgrade allows both countries to maintain their narratives that they are standard-bearers for that world order.

So, in another small way, the FTA upgrade makes a point to the ASEAN-inspired push for the Regional Comprehensive Economic Partnership (RCEP) agreement, which represents New Zealand’s best hope of liberalising trade with protectionist India.

In a twist that resembles the US withdrawal from the TPP agreement in 2017, it appears India will now stand outside the RCEP pact to be agreed this week, with an invitation to join later.

Meanwhile, in Washington, one of New Zealand’s most senior trade negotiators, Foreign Affairs deputy secretary Vangelis Vitalis, is en route to Washington for talks about prospects for a bilateral trade deal between the US and New Zealand.

Pigs might fly, but the Trump administration has opened the door a crack, so New Zealand has to try.

However, it’s extremely difficult to see how New Zealand could expect to fare any better against the US determination to protect its intellectual property - think big pharma vs Pharmac - than it did in the TPP negotiations. The absence of those US demands was one reason the renamed CPTPP was able to be concluded.

So, again, a feather in the cap of the New Zealand-China relationship at a time when China can wring value from respectable Western friendships.

As expected, the upgrade does not confer enormous benefits to New Zealand. There are no significant changes to dairy market access, which is already on a slide towards free market access by the mid-2020s anyway. That will continue.

It had been clear for some time that the only areas of substantive gains would be in wood processing and forest products. Their inclusion in the FTA is useful and mirrors the government’s special treatment of foreign investors wanting to put money into New Zealand forestry assets.

A synchronicity in this is worth noting. China’s insatiable appetite for dried milk, made competitive for New Zealand farmers by the original 2008 China FTA, was one reason for the dairy intensification that occurred earlier this decade.

Now, as New Zealand turns more to using farmland for forestry and away from dairy conversions, the FTA upgrade looks set to improve opportunities in China for our forest products.