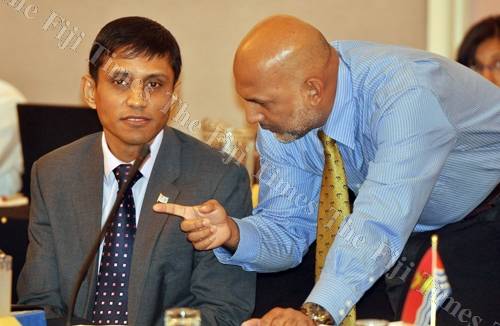 Shiu Raj, right, has a chat with Shaheen Ali during the meeting in Nadi yesterday. Picture: BALJEET SINGH

Pacific could be pushed into unwanted deals

AS the start of trade talks on a comprehensive Economic Partnership Agreement (EPA) with the European Union nears, Pacific African Caribbean Pacific countries have been urged not to allow themselves to be forced into a deal that undermines each country’s independence.

While opening the two-day Pacific ACP States technical working group on fisheries in Nadi yesterday, permanent secretary for the Industry and Trade Ministry Shaheen Ali said member states could be pushed to accept a trade agreement that was not beneficial to them.

"Make no mistake, we the Pacific ACP States could be pushed to accept a trade agreement that is not to our benefit if we allow our unity and resolve to be weakened," said Mr Ali.

"It was only a few years ago, in 2007 that Fiji and Papua New Guinea were faced with a similar scenario, which was to agree to an interim EPA or face losing market access for important commodities such as sugar and fish," he said.

Mr Ali said the unreliability and uncertainty of unilateral agreements such as the EBA (Everything But Arms) and the EU GSP (Generalised Scheme of Preference) as fall back options further limited the region’s options.

"As we finalise our negotiating positions and strategies, we need to ask whether we will allow ourselves to be forced into a deal that undermines our independence and economic power as a unified group of sovereign nations," he said.

Mr Ali said the delayed response, the inflexible positions and new proposals at this late stage demonstrated the lack of seriousness to conclude negotiations on the side of the EU.

"Not only has the EU taken a hard-line on the Fisheries Chapter, but it has also proposed a new Chapter on ’Sustainable Development’ in the draft EPA legal text.

"This attempt to include new social and labour provisions to an economic and trade agreement, issues that are most appropriately addressed through other forums, seems to be an inappropriate and irresponsible at this point of negotiations.

"Yesterday, representatives from the Pacific ACP region were briefed on the issues related to the Legal Text on Fisheries and were updated on fisheries concerns in the EPA negotiations.

"The objective of the meeting was for fisheries and trade officials to consider various fisheries-related issues arising out of the EPA negotiations between the Pacific ACP States and the EU," he said.