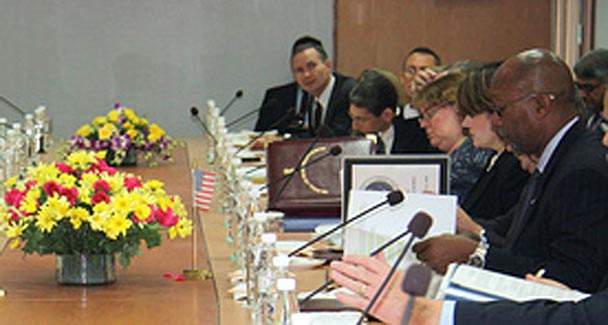 Sources in the Board of Investment told Dawn that the decision to restart the negotiations on BIT was reached in the recent talks between Pakistan and the US team led by its Trade Representative Ron Kirk. - File Photo

Pakistan, US to start BIT talks this month

ISLAMABAD: Pakistan and the United States are scheduled to restart negotiations on Bilateral Investment Treaty (BIT) in the third week of May. The authorities consider it a major success of Trade and Investment Frame Agreement (TIFA) talks held recently in the US.

Sources in the Board of Investment told Dawn that the decision to restart the negotiations on BIT was reached in the recent talks between Pakistan and the US team led by its Trade Representative Ron Kirk.

Sources said that the main issue pertaining to signing of BIT was lack of formal and well-defined arbitration system in Pakistan.

“The US delegation that consisted members of private sector cited examples related to harassment and prosecution of investors in Pakistan,” sources said, adding that due to certain cases in the past the investors were reluctant to invest in the country.

The talks focused on a settlement mechanism and the role of state in case of dispute between the private sectors of both the countries.

The US investors have also highlighted the issue of public registration system in the country that was involving the stakeholders before any major changes are made in the regulations.

The signing of Bilateral Investment Treaty has been pending in the files for almost two years due to inflexible attitude of both sides.

The Pakistani authorities have been resisting the demand of the US officials to provide protection to the investments made by the US investors and the government should be the guarantor of the investments in case of any dispute or mishap damaging the investment.

However, officials of the commerce ministry expressed optimism over the success of the talks.

He said that the bilateral treaty would open the doors for the US investment in the country as the investors would feel more secure, if there is legal protection to them.

However, an official of the finance ministry said that the investment treaty would be a reciprocal move and it would also provide similar facilities to Pakistani investors in the US.

The official said that such a treaty, if made carelessly, could lead to flow of local investment to the United States, while on the other hand if too many incentives are offered to the investors in the treaty, Pakistan might end up being hostage to the investors with the state having no powers to control their activities.