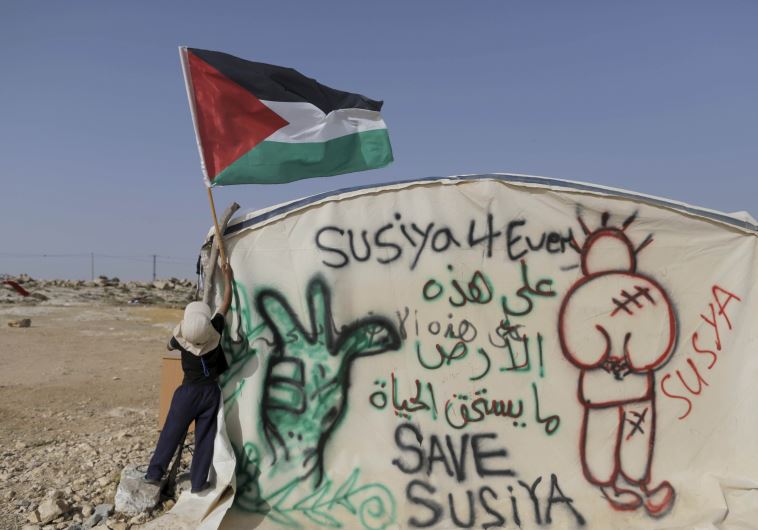 A Palestinian boy places a Palestinian flag on a tent in the West Bank village of Sussiya. (photo credit: REUTERS)

Palestinians to EU: Suspend trade agreements with Israel to protest demolition of homes

European support for village of Sussiya must be backed with action, community spokesman writes in a letter to EU’s Mogherini.

Residents of the Palestinian village of Sussiya on Sunday called on the European Union to suspend its trade agreements with Israel to protest the pending demolition of unauthorized homes in their herding community in the South Hebron Hills region of the West Bank.

European support for Sussiya must be backed with action, the community spokesman Nasser Muhammed Nawajah wrote in a letter he sent to EU foreign policy chief Federica Mogherini.

“Until today European support of the Israeli economy is expressed in the preferential conditions that Israel receives under its Trade and Association Agreements with Europe. The association agreement stipulates that ‘relations between the parties, as well as all the provisions of the agreement itself shall be based on respect for human rights and democratic principles’ and that this ‘constitutes an essential element of this agreement,’” he wrote

“In our opinion Sussiya is one example of how Israel continues to violate these principles and therefore we urge you to suspend Europe’s trade agreement with Israel as well as end trade with companies operating in settlements on occupied territories until Israel fulfills its obligation under international law,” he wrote.

A copy of the letter was posted on the twitter site of the NGO, the Palestinian Popular Struggle Coordination committee.

The US on Thursday warned Israel against the pending demolition of structures both in Sussiya and nearby Wadi Jahish.

“Demolition of this Palestinian village or of parts of it, and evictions of Palestinians from their homes would be harmful and provocative,” State Department spokesman John Kirby told reporters in Washington on Thursday, as he focused his public comments on Sussiya.

Last week the Civil Administration sent the NGO, Rabbis for Human Rights, a list of 30 structures in Sussiya and another 6 in Wadi Jahish that it intends to demolish by August 3rd.

Some 21 of the Sussiya structures and three of the Wadi Jahish structures were built with funding from the European Union and individual European governments.

Rabbis for Human Rights has a petition pending before the High Court of Justice to help legalize Sussiya, in which some 340 Palestinians live in temporary structures, including tents and shacks. But there is no corresponding HCJ petition with regard to Wadi Jahish. Until last week the residents of Wadi Jahish did not know that structures within their village were under threat of immediate demolition.

As a result the growing international battle on behalf of the Palestinians, has focused on Sussiya,

“We’re closely following developments in the village of Sussiya in the West Bank, and we strongly urge the Israeli authorities to refrain from carrying out any demolitions in the village,” Kirby told reporters in Washington.

“Such actions have an impact beyond those individuals and families who are evicted. We are concerned that the demolition of this village may worsen the atmosphere for a peaceful resolution and would set a damaging standard for displacement and land confiscation, particularly given settlement-related activity in the area,” he said.

On Thursday the US Deputy Consul General in Jerusalem, Dorothy Shea, visited Sussiya in a show of solidarity with the village.

Last month the EU representative to the Palestinian Authority, John Gatt-Rutter made a similar visit to Sussiya and also called on Israel to legalize the structures.

The NGO Regavim, which fights against illegal Palestinian and Israeli Arab construction in March, sent a submission to the HCJ with regard to Sussiya. It said it was not a long standing village, but rather an attempt by Palestinians to create a new community in Area C of the West Bank, which is under Israeli civil and military control.

It explained that historically residents of the nearby Palestinian village of Yatta had temporarily lived in the area of Sussiya to herd their flocks in the winter months. These same residents of Yatta, located in Area A of the West Bank that is under Palestinian civil control, now seek to legalize building in Sussiya.

On Sunday, the Civil Administration met with the residents of Sussiya to try and find an alternative site for the village, but no resolution to the issue has been reached. One plan which the villagers rejected is to relocate them off of their lands and onto property belonging to other Palestinians from the village of Yatta.

Sussiya was initially located in the middle of an archeological site in Area C of the West Bank, but in 1986, the IDF forced the village to relocate to its present location. The villagers rebuilt their homes of tents and temporary structures on agricultural land they owned just a few hundred meters away from the village’s original site.

When if failed to execute those orders, Regavim petitioned the High Court to force the state to raze the village.

In response, Rabbis for Human Rights submitted a building and zoning plan for the village to the civil administration, so that the homes could be authorized, rather than demolished.

The Civil Administration rejected the master plan in 2013 and the HCJ closed the case in February 2014, after the state promised the court it would execute the demolition orders.

Such plans were temporarily suspended when Rabbis for Human Rights that same month appealed to the HCJ and asked it to overturn the Civil Administration’s decision to reject the master plan.

It simultaneously asked the court to issue a temporary injunction halting any demolitions until the HCJ adjudicates the matter.

The HCJ agreed to hear the case, but in May it rejected the request for an injunction to prevent the demolition of the village during the judicial proceedings.