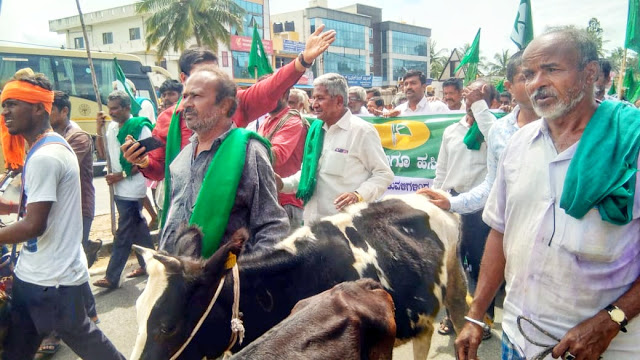 Through these joint actions, they were registering their protest against the Union Government’s decision to sign onto RCEP – the Regional Comprehensive Economic Partnership Agreement – a trade deal involving India and 15 other nations in the Asia Pacific.

RCEP is touted as the world’s biggest trade deal and farmers in India point out that its an agreement shrouded in secrecy, despite threatening to impact the country’s dairy sector and the autonomy that the farmers have over seeds. They allege that while the Indian government, held consultations with several Corporate bodies to allay their concerns, it has held no negotiations with any of the farmer’s representatives so far.

Over the last week, several state governments and opposition parties in India have also held press conferences and public meetings rejecting RCEP and urging the Union Government to safeguard the interests of India’s farmers and rural workers before opening up the country to further competition from ASEAN countries as well as big economies like China, Japan, Australia and New Zealand.

“As the date for Prime Minister Narendra Modi’s proposed visit to Bangkok draws near – he is expected to be in the Thailand capital on November 4 – the objective of his planned trip to the Asian country has left the agrarian community, the dairy farmers in particular, a worried lot,” Times of India reported from Mysuru.

“In a bid to urge PM Modi to back out of RCEP, hundreds of farmers, activists and many prominent personalities took out a rally from Ramaswamy Cricle to the deputy commissioner’s office in the city on Thursday. On reaching the destination of their rally – the DC’s office – the protesters sat in front of the heritage structure and raised slogans condemning the central government and PM Modi. The protesters then proceeded to submit a memorandum to the DC, wherein they have asked the Centre not to go ahead with the RCEP agreement.”, the report added.

Several actions took place across Karnataka, organised by the Karnataka Rajya Raitha Sangha (KRRS) in Mandya, Shimoga, Hassan, Kolar, Chikkaballapura, Chamarajanagar, Ramanagar, Belagavi, Chitradurga, Madikeri, Haveri, Tumkur, Raichur, Bellary, Gulbarga, Bijapura, Gadag, Yadagiri and Yelanduru and many other taluk headquarters. Here below, is a glimpse of the actions from around the state.