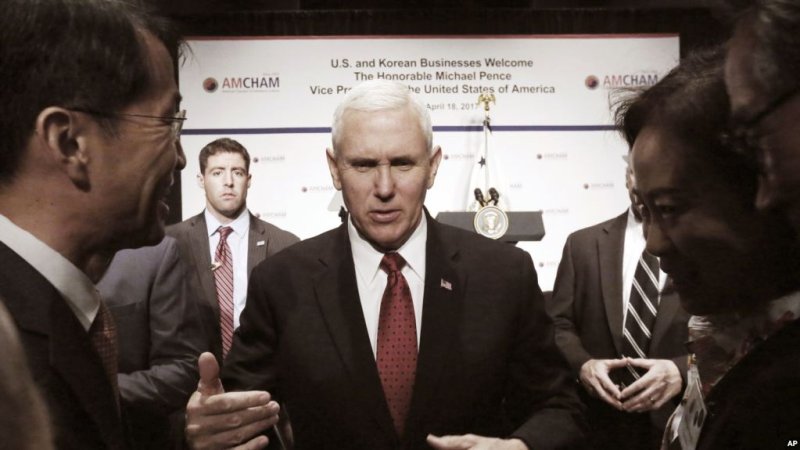 US Vice President Mike Pence said Tuesday the Donald Trump administration is to “review and reform” the free trade pact with South Korea, citing growing trade deficits and “too many barriers” for American firms.

At a meeting of the American Chamber of Commerce in Seoul, Pence said since the two countries’ trade agreement took effect five years ago, the US’ deficit has more than doubled, calling it the “most concerning fact.”

“We have to be honest about where our trade relationship is falling short,” he said.

“That’s the hard truth. And our businesses continue to face too many barriers to entry which tilts the playing field against the American workers and American growth.”

On the campaign trail, Trump criticized the South Korea-US free trade agreement as a “job killer” especially for the US auto industry, and immediately already pulled out of the 12-nation Trans-Pacific Partnership after taking office. But Pence’s remarks represent the most explicit signal yet the administration will push for a renegotiation of the bilateral deal.

South Korea’s surplus with the US, meanwhile, soared from $15.2 billion to $23.2 billion during the same period, Korea International Trade Association data shows.

South Korea argues automobiles are a small fraction of two-way trade, and has been seeking to import more energy from the US while encouraging its companies to invest more there. Last month, Trade, Industry and Energy Minister Joo Hyung-hwan visited Washington and met with Commerce Secretary Wilbur Ross in a bid to highlight the pact’s mutual benefits.

Pence called for help to “level that playing field,” and build a system that “maximizes jobs and growth” for both countries.

“We are reviewing all of our trade agreements across the world to ensure they benefit our economy as much as they benefit our trading partners,” the vice president said. “We will work toward that end to reform KORUS in the days ahead.”

Wrapping up the lecture attended by some 70 South Korean and US business leaders, Pence left through Osan Air Base for Tokyo, where he and Japanese Deputy Prime Minister kicked off an economic dialogue. Pence will also meet with Prime Minister Shinzo Abe and discuss North Korea’s evolving nuclear and missile threats.

On Monday, Pence sent a robust warning to Pyongyang during a joint news conference with acting President and Prime Minister Hwang Kyo-ahn. He is also scheduled to visit Indonesia and Australia later on before heading to Hawaii, home to the US Pacific Command.