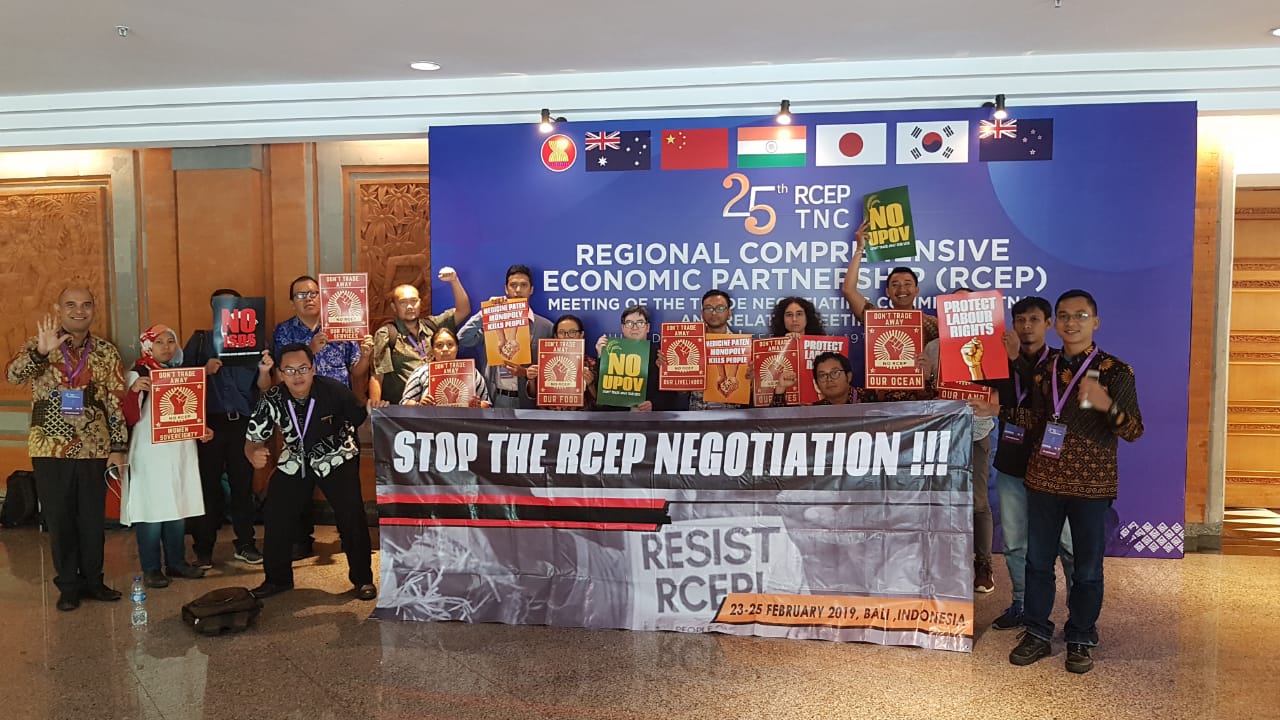 Denpasar, 25 February 2019. Coalition of Indonesian Civil Society for Economic Justice together with civil society from other RCEP member countries like India, Philippines, Malaysia urges governments not to agree on Regional Comprehensive Economic Partnership (RCEP) agreement. This demand was conveyed during the 25th RCEP round of negotiations in Nusa Dua, Bali.

This rejection on RCEP based on the fact that this free trade negotiation is problematic both in process and substance. The negotiation process is always done in confidential matter and not transparent. No chapters of the agreement made public even for already concluded chapters, even though this agreement will have impact on the wider community in various sectors of life. As for the substance, many provisions are very problematic. One that is intensively negotiated is greater protection for foreign investors and neglect of the protection of human rights. "The last 5 years island wide rejection of Balinese people towards Benoa Bay reclamation of is a reality of community resistance to investment projects that destroy the living space and culture of the people in Bali," said I Nyoman Mardika from Manikaya Kauci Foundation.

Reclamation of coastal areas will clearly displace coastal communities and fishermen, in Indonesia 90% are small-scale fishermen. Henri Pratama from Coalition of Indonesia Traditional Fishers (KNTI) explained that the fundamental problem of fisheries sector is not about increasing investment, but related to protection of fisheries workers, empowering small and traditional fishermen and improving their welfare. The reality shows that investment only captures the living space of fishermen. The construction of the port grab fishermen’s access to the sea, eliminates fishing grounds. In addition, eradication of illegal vessels also unmasked the presence of slavery on fishing vessels and fisheries product management companies. Starting from work protection and safety, unclear employment contracts, as well as low wages and unpaid overtime work. This shows that the protection and welfare of fishermen and crew members must be top priority.

Not only fishermen, farmers and agriculture sector are also threatened to lose their sovereignty over seeds due to RCEP. Intellectual Property Rights chapter on RCEP, requires member countries to join and establish national rules based on the UPOV 1991. "This will only benefit the seed industry and systematically eliminate local seeds and create dependence on farmers to seed industry and create indebtedness," said Kartini Samon, researcher from GRAIN. The chapter on Intellectual Property Rights in RCEP will also have very significant impact to people living with HIV / AIDS and chronic diseases who are highly dependent on affordable access to medicines. Ferry Norrila from Indonesia AIDS Coalition explained "The generic ARV medicines available today in Indonesia are only for line 1, while for lines 2 and 3 are still imported. Don’t let trade agreements only benefit big companies and ignore our lives. RCEP can even eliminate one generation.”

Another worrying chapter is the e-commerce chapter that said to be finalized soon. Olisias Gultom, senior researcher from Indonesian Global Justice, stressed that the discussion of this chapter must be stopped. This is because e-commerce chapter not only limited to digital commerce but covers all aspects of the economy and is related to other sectors as the economy are more and more digitalised. While the e-commerce chapter has not discussed some sensitive issues like mechanism of digital product transactions and payments that will harm RCEP member countries and only benefit the corporation.

These impacts clearly must become main consideration for RCEP member countries. Moreover, several countries will hold general elections soon, such as Indonesia, Thailand, India, the Philippines and Australia. “RCEP member countries should not be careless to commit themselves to a comprehensive economic agreement that will eliminate state ability to protect and fulfill the rights of its citizens. Including the rights of women as group that will feel more severe and deep impact due to gender roles. Of course this will be a burden for the next government whoever is elected", stressed Arieska Kurniawaty from Solidaritas Perempuan. Furthermore, Joseph Purungganan from Focus on the Global South – Philippines said that governments seems to be pushing hard for the conclusion of the talks this year, despite the strong demand expressed by peoples movements across the region for a stop to the RCEP negotiations. Governments are saying they need to find a balance between public and private interest. What we are saying is that the balance of power is already tilted in favor of corporations and what States should be doing is ensuring that the interest of the poor and marginalised are given primacy. What we demand is not balance but justice!

Further information about RCEP can be found at: