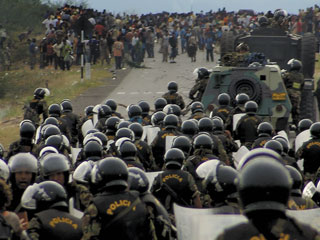 On June 5, 2009, Peruvian security forces attacked several thousand Awajun and Wambis protestors, including many women and children, who were blocking the "Devil’s Curve," a jungle highway near Bagua, 600 miles north of Lima. The protestors were demanding revocation of decrees enacted to conform Peruvian law to FTA requirements.

Thirty-two Peruvians died in the infamous Bagua massacre and hundreds were wounded.

The FTA’s foreign investor privileges also allowed a U.S. firm to pressure Peru’s government to reopen a smelter that had severely lead-poisoned hundreds of children in La Oroya, Peru — a story revealed in a Bloomberg exposé. Outrageously, now the Obama administration is pushing for inclusion of the same extreme foreign investor privileges in the Trans-Pacific Partnership (TPP) it is negotiating with Peru and 10 other Pacific Rim countries.

Opposition to these terms, which empower foreign investors to circumvent domestic courts and laws, and sue governments for cash compensation in foreign tribunals, is just one issue that is bedeviling TPP negotiations, which have missed repeated deadlines.

The Baguazo, as Peruvians call the 2009 massacre, was caused in part by Peruvian President Alan Garcia. His decrees implementing the FTA violated the rights of indigenous people established both under the Peruvian Constitution and treaties Peru had signed guaranteeing prior informed consent by indigenous communities on projects involving their land. And, Garcia demonized the protestors as perro del hortelano – “manger dogs.” He likened the indigenous protestors to dogs growling over food that they neither eat nor let others eat.

Thanks to WikiLeaks, we can now see that the U.S. government was urging Garcia on.

Public Citizen received only heavily redacted diplomatic cables in response to a Freedom of Information Act request regarding the U.S. role in the 2009 Peruvian crisis over FTA implementation. But WikiLeaks has published the full text of messages between the State Department and the embassy in Lima.

Four days before the killings, a State Department cable addressed the growing indigenous protests, stating, “Should Congress and President Garcia give in to the pressure, there would be implications for the recently implemented Peru-US Free Trade Agreement.”

Days before the massacre, the State Department argued that the Peruvian government was being too lenient by allowing the indigenous roadblocks to continue. “The government’s reluctance to use force to clear roads and blockades is contributing to the impression that the communities have broader support than they actually do...”

On the day of the Baguazo, another State Department cable did not condemn the government’s role in the violence, but blamed the violence on Peru’s indigenous movement — and again defended Garcia’s decrees. “At the root of this crisis are social movement leaders seeking to make political hay by manipulating underlying grievances — mostly entrenched poverty and encroachment on traditional lifestyles by the modern world…”

Indeed, the cable even sought to justify the government’s actions in Bagua : “The GOP [Government of Peru] has sought for several weeks to negotiate indigenous concerns over the decrees… Now, it has reluctantly chosen to enforce the rule of law by removing roadblocks…”

What has become known as the “Amazon’s Tiananmen” brought the realities of the U.S.-Peru FTA into sharp relief. Rather than being a new trade agreement model, as it was sold, at the FTA’s heart were the same extreme investor rights that animated the North American Free Trade Agreement (NAFTA).

Indeed, when Congress passed the U.S.-Peru FTA in late 2007 a majority House Democrats opposed the deal. And no labor, environmental, consumer, family farm, or faith group supported it. While Democratic House trade committee leaders had forced some improvements with respect to access to medicine and the FTA’s labor and environmental chapters, the pact included an expansion of NAFTA-style investor privileges.

Peruvian groups also expressed strong opposition, including labor, Afro-Peruvian, and indigenous groups. They not only opposed the foreign investor privileges but also other FTA terms in areas of “intellectual property”, “services”, and more that threatened their biodiversity, cultural heritage, access to medicines, and traditional livelihoods. Peru FTA wounds continue to fester. A recent report of the United Nations’ Special Rapporteur James Anaya, filed after a December 2013 Peru visit stresses that on the issue of extractive activities, “Many indigenous peoples in the country have suffered devastating social and environmental impacts, and without receiving many benefits…”

The fifth anniversary of the Baguazo is a most appropriate time to reconsider the U.S. approach to the Trans-Pacific Partnership. The experience of the U.S.-Peru FTA makes clear even improved labor and environmental chapters cannot overcome the NAFTA-style investor protections at the core of the Peru FTA and now TPP.

de Echave is the former vice minister for the Environment of Peru. Wallach is the director of Public Citizen’s Global Trade Watch.