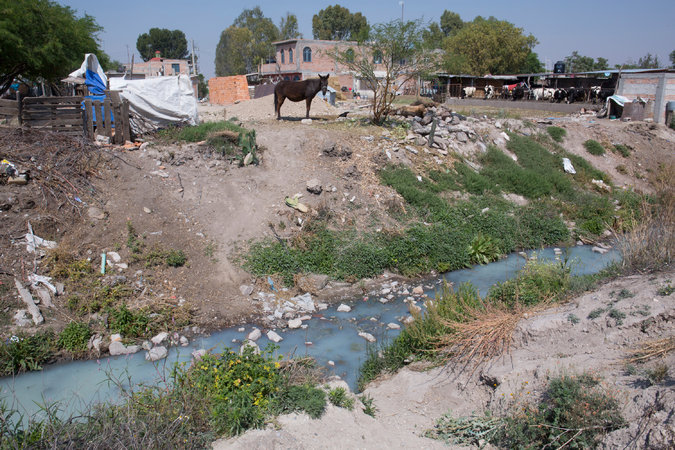 SAN ANTONIO DE LOURDES, Mexico — In the dappled shade of mesquite trees by the side of a pale yellow schoolhouse, the children finished a song and waited for the priest’s blessing.

The Rev. Juan Carlos Zesati began with a gentle exhortation, citing Pope Francis. “Water is part of God’s creation,” he said as he traced the connection from God to the earth, to life, to community and ultimately to every individual. “We have to respect that connection.”

But the well in San Antonio de Lourdes, a village in Guanajuato State in central Mexico, went dry years ago. The village itself, depleted by poverty and migration, seems to be drying up, too, and only 29 children are left in the primary school. But a half-hour’s drive away, fertile farms pump water from deep underground to irrigate fields that grow broccoli and lettuce for American supermarkets.

“Your communities are suffering,” Father Zesati told a group of mothers and children before delivering his indictment. It is the farms that “are sucking up the water — but just for themselves.”

Then he turned to face a whitewashed water tank, built by the people of San Antonio de Lourdes to collect rainwater from the school roof, raised his right hand, and blessed it. “This seems small for all the problems there are — but it’s a sign of hope.”

It was the first of a day of such blessings in a hilly arid pocket of central Mexico where farmers wait for rain to bring subsistence crops of corn and beans to life.

When Father Zesati arrived in northern Guanajuato four years ago, he quickly learned that he was at the heart of a water crisis, one that is playing out over much of agricultural Mexico.

“What the pope emphasizes is that those who most suffer from the pressure on the earth and from ecological destruction — the first who suffer its effects are the poor,” Father Zesati said. “They are made poor by those who follow an economic model that throws its costs at them.”

The farms in Guanajuato count as one of the great success stories of that model, codified in the North American Free Trade Agreement, or Nafta. Every day, workers stack crates of fresh produce aboard giant refrigerated trucks that roar straight to the Texas border.

“Nafta is all about high-intensive-labor crops,” said Dylan Terrell, the director of Caminos de Agua, an organization that works with universities in the United States to test water quality in the Guanajuato wells, and designs and pays for cisterns and other methods to collect clean drinking water.

As far back as the 1980s, even before the free trade agreement, the government imposed a ban on most new wells in Guanajuato. But water extraction increased exponentially. What allowed that to happen is “a pretty well-known system of bribes and corruption,” Mr. Terrell said.

Every year, farms bore farther into the aquifer, and scientists warn that as they go deeper they are reaching tainted water deposited between 10,000 and 35,000 years ago.

“Here is the challenge for the authorities,” said Marcos Adrián Ortega Guerrero, a hydrogeologist at the National Autonomous University of Mexico. “It is to administer water that is thousands of years old, water that is contaminated with arsenic and fluoride which is causing great harm and that they have never wanted to acknowledge.”

The signs of tainted water seem apparent. The most visible evidence is the prevalence of dental fluorosis, an illness that blackens teeth. Yet the many complaints of joint pain suggest that some people might have developed a much more severe illness, skeletal fluorosis, which occurs when fluoride accumulates in the bones.

“My husband can’t bear the pain in his feet,” said Guadalupe Mata, 39, a mother of three in Rancho Nuevo, the second village on Father Zesati’s route of cistern blessings. “He gets injections, but the pain just comes back. But he still goes to work in the fields to plant chile.”

Her 16-year-old daughter has been hospitalized for kidney trouble, she said. Buying bottled water is far beyond the family’s means; her husband earns about $33 a week.

There have been no formal studies of the effect on health caused by excess arsenic and fluoride in the community wells of Guanajuato, but recent tests carried out by Northern Illinois University for Caminos de Agua show levels that are many times higher than levels recommended by the World Health Organization.

According to the W.H.O., long-term exposure to arsenic at those levels can cause skin, lung and other cancers, and can have neurological and cardiovascular effects. Along with dental and skeletal fluorosis, excess fluoride may exacerbate renal illness, the organization said.

Three people have died of kidney disease since Father Zesati arrived, and now he fears for Gloria Villanueva Rodríguez, whose kidneys failed a year ago. Three sons left to join three more who were already working in the United States and who send money to pay for her dialysis treatments.

Few question that Guanajuato’s water supply is under acute pressure. Farms account for about 82 percent of all water use and do not have to pay for it.

“The available studies are more than enough to state that the aquifers are subject to destructive overexploitation,” Víctor Hugo Alcocer Yamanaka, the technical subdirector for the National Water Commission, or Conagua, wrote in response to questions.

He denied allegations that Conagua, which has only 10 inspectors for the entire state, had granted illegal water concessions.

Dr. Alcocer also confirmed that excess levels of fluoride had been detected in a number of sites in the northern part of the state, and both fluoride and arsenic had been found in a smaller group of sites.

“We have to support growth,” said Roberto Castañeda, the agriculture under secretary for Guanajuato State. To save water, he said, “we have to be much more intensive in applying the law, in bringing technology to the countryside and improving efficiency.”

Alvaro Nieto, a farmer who sells broccoli, lettuce, kale and brussels sprouts to California distributors, said most Guanajuato farmers were uninterested in conservation. And the government has been unwilling to crack down on illegal wells and overpumping, he added.

Mr. Nieto said he had cut water consumption to 40 percent of what it was two decades ago by using soil conservation techniques. “I don’t pump more water because I want my business to last many generations,” he said. “We are many people all drinking with many straws from the same glass.”

Jaime Hoogesteger, a researcher at Wageningen University in the Netherlands who has studied Guanajuato’s water problem, predicted that the agricultural boom would eventually use up all the water that feeds it. “The question is how long it will take,” he said.

As evening approached, Father Zesati blessed another cistern to the bleating of sheep at the home of an older couple, Teresita Aguilar and Gabriel Padrón. They, along with a dozen relatives and friends, raised their right hands.

Then someone said: “Now we just have to wait for it to rain, a lot.”