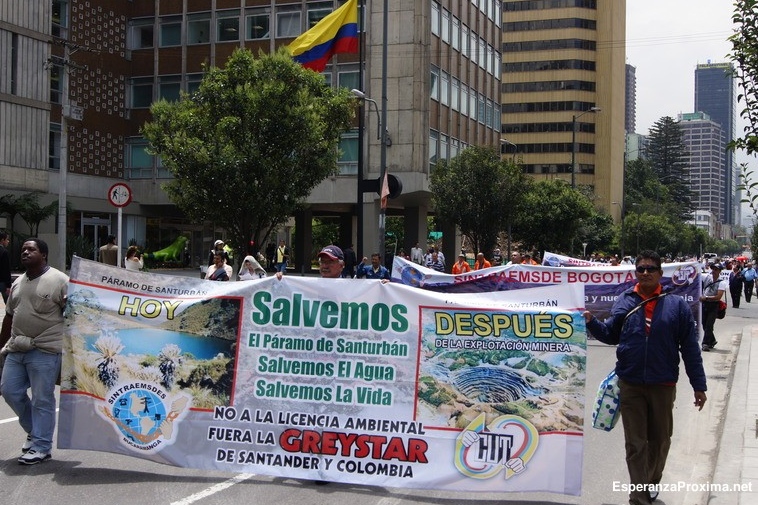 Canada’s Greystar Resources Ltd., which changed its name to Eco Oro Minerals Corp., plans to build the Angostura mine in the heart of the Santurbán páramo in Santander, Colombia. The Andean region of high-altitude forests and wetlands is a “water factory” for lower-altitude zones, and a refuge for hundreds of threatened species like the spectacled bear.

Between 2009 and 2011, AIDA found legal and technical discrepancies in the project, originally slated as an open-pit mine. In 2010, Colombia’s Ministry of Environment, Housing and Territorial Development returned to the company its environmental impact study, which had only included a limited area of the proposed mine, and requested another. The ministry based this decision on the argument, supplied by AIDA, that mining is not allowed in the Santurbán páramo under current law.

In May 2011, the ministry finally denied the environmental license (Spanish only) for Angostura, repeating that the project was in a protected ecosystem. Even so, Eco Oro still holds mining rights for the project, and in March 2012 it launched studies into building an underground mine in the same area. With the discussion still alive, it is important to insist that mining is prohibited in páramos, even underground activities.

Another key element of Angostura is its financing by the International Finance Corporation (IFC), a private-sector lending arm of the World Bank Group. AIDA discovered that although the IFC said its investment through the purchase of US$18.2 million of shares in Eco Oro Minerals was used to determine the feasibility of the project, in reality it would cover the same areas. Adding to this was the IFC’s failure to comply with its own policies of social and environmental sustainability. Consequently, we worked with CIEL and MiningWatch Canada on a complaint (Spanish only) demanding that the Compliance Advisor Ombudsman (CAO), the independent complaints office of the IFC, audit the IFC’s investment and require it to pull out of the project. The Committee for the Defense of Water and the Santurbán Páramo, made up of 40 civil society organizations representing about 75,000 people, filed the complaint before the CAO in June 2012.

On June 28, 2013, the CAO announced in a report its decision to audit the IFC’s purchase of the Eco Oro shares. The investigation will seek to find out whether the assessment of social and environmental risks, especially those that are cumulative and long term, were adequately carried out as a precursor to the investment. AIDA will follow the investigation to ensure that the CAO makes a decision in line with the World Bank Group’s policy of social and environmental sustainability, its performance standards and national and international standards of environmental law. This would set precedents to prevent the development of such projects in protected ecosystems, especially when mining companies are looking at developments in the páramo moors of Ecuador and Peru. In January 2013, Colombia took a step forward in this direction when the Ministry of Environment declared the Santurbán páramo a Regional Natural Park. The move confirms the legal exclusion of the páramos from mining with the aim of guaranteeing the protection of all these ecosystems.

Nevertheless, the Santurbán still faces risks. Gold mining could cause the leakage of large amounts of cyanide and arsenic into the water coming from the páramo. Further steps must be taken to prevent the dearth of boundaries from being used as an excuse by miners to exploit the páramos with projects like Angostura. A vital step is to use scientific criteria to establish the boundaries of the páramos. Colombian officials have contributed to this task by drawing up a new atlas of the páramos at a scale of 1:100,000 and then 1:25,000 in legal accordance with the National Development Plan. It is a serious, rigorous and prize-winning work.

Many voices have united to appeal for an adequate demarcation of the Santurbán páramo through venues such as the United Nations Human Rights Council and the Andean Parliament (Spanish only). AIDA has promoted public debate in the Colombian media (Spanish only) for the demarcation as a way to help protect this valuable ecosystem as a source of freshwater, a home to rich biopersity and a carbon sink for mitigating the effects of climate change. AIDA also has teamed up with prestigious Colombian environmentalists (Spanish only) to press the Ministry of Environment to adopt the cartography work of the Humboldt Institute so there can be a prompt and appropriate demarcation of Santurbán and the rest of Colombia’s páramos.

On March 31, 2014, the Ministry of Environment announced the delimitation of the Santurbán Páramo. While the ministry disclosed some aspects of the measure to the media, it did not release full details. These include the full extension of the demarcation, exact coordinates and which mining operations are inside or outside of the defined area.

We urge the Colombian government to continue respecting environmental norms to defend our human rights to clean water and a healthy environment. We ask the ministry to provide full, truthful, and impartial information about the demarcation of Santurbán.

On February 8, 2016, Colombia’s Constitutional Court on Monday declared unconstitutional an aspect of the country’s National Development Plan that permitted mining in páramos. AIDA and partner organizations presented an amicus brief in support of the corresponding lawsuit, filed by the Cumbre Agraria, Campesina, Étnica y Popular. The high court’s decision is key to the protection of the Santurbán páramo. We urge the Ministry of the Environment to promptly enact the court’s ruling and protect all the country’s páramos from the impacts of large-scale mining operations.