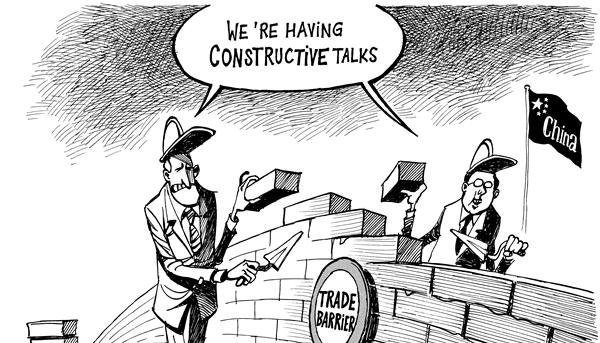 Protectionism, after all: China, Korea, Japan use non-tariff barriers to impede imports By: Banikinkar Pattanayak

Countries like China, South Korea and Japan may boast of low tariffs but they have erected huge non-tariff barriers (NTBs), most of which are tailored to mask the ferocity of trade protectionism, in a bid to control the imports they deem undesirable.

An internal analysis of the Indian commerce ministry ahead of the country’s pull-out of the RCEP deal in November shows China has put in place 1,516 notifications that are nothing but technical barriers to trade (TBT), followed by South Korea (1,036), Japan (917) and Thailand (809), while India has initiated only 172 such steps (See the chart). The total number of TBT measures put in place by all RCEP members, including India, stood at 5,909. India’s average applied tariff, however, stood at 17.1%, the highest among RCEP members, while China’s was 9.8%, South Korea’s 13.7% and Japan’s 4.4%.

Similarly, China has notified 1,332 sanitary and phytosanitary (SPS) measures, while South Korea and Japan have imposed 777 and 754 SPS barriers, respectively. In contrast, India has imposed only 261 SPS measures, according the analysis reviewed by FE. These two types of steps are the major sources of non-tariff measures (NTM), making up for over 80% of NTM notifications sent by various countries to the WTO. Developed countries like the US and those in Europe, too, impose such measures in large numbers.

While NTMs are not always aimed at curbing imports (for instance, safety, quality and environmental standards are put in place by all countries for imported products), what have often worried analysts is that they can be abused for trade protectionism, especially in times of frosty political ties between trading partners.

The NTBs slapped by various trading partners came up for deliberations at an inter-ministerial meeting on December 23, chaired by commerce and industry minister Piyush Goyal. It was also revealed that while most of India’s key partners had built in elevated levels of NTBs, only about 10% of New Delhi’s imported products were subject to various standards.

Concerned with a surge in inflows of sub-standard products, Goyal has now asked the Bureau Of Indian Standards (BIS) to develop standards for over 4,500 products (HS lines), preferably over the next six months. The move marks a policy shift in New Delhi from a pro-liberalisation approach to external trade to a more discretionary one, where barriers could be erected, if required, to curb ‘non-essential’ and sub-standard imports that harm the economy, rather than benefit it. New Delhi’s earlier approach was to curb non-essential imports through a hike in tariffs (it had raised duties on a number of electronic and other items in 2018).

Exporters say some of the common NTBs that they are subjected to are stringent rules on product certification, labelling standards and import approval requirements. Customs clearances face delays and often (especially in case of China) factory has to be inspected at the exporter’s expense. Customs value of the same item may vary for duty calculation depending on ports and rules are frequently changed and details are not easily available in English.

Rakeh Mohan Joshi, chairperson (Research) at the Indian Institute of Foreign Trade, said the entire trade strategy to protect a country’s markets has, over the years, shifted from ‘tariffs’ to ‘non-tariff’ barriers, most of which are hardly transparent. “Rather countries are becoming increasingly innovative to devise new barriers to trade on the grounds of quality, processes, environment or other technical issues that effectivley ward off the foreign goods to enter their domestic markets and have a translucent protectionistic strategy,” he said.

India pulled out of the 16-nation RCEP agreement in November, as its proposals on safeguard measures to deal with any “irrational spike” in imports, among others, weren’t adequately addressed by potential partners, including China.