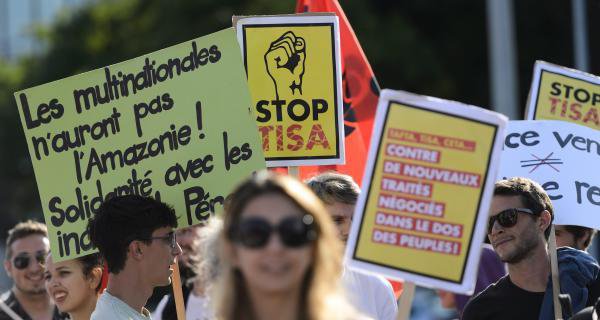 Some 200 people demonstrated in Geneva on Wednesday against the Trade in Services Agreement (TISA). Since Monday a group of states has been at Australia’s consulate in the Swiss city, discussing the controversial pact to open up services markets.

In Geneva members of the STOP TISA movement, unions, left-wing activists and social movements protested in front of the headquarters of the United Nations and the World Trade Organization (WTO) on Wednesday evening. They denounced the trade deal, which they claim has far-reaching consequences and will lead to a liberalisation of public services like education, health and energy.

“TISA is a threat to democracy. States are dispossessing themselves and their people of their democratic rights,” warned Eric Decarro from STOP TISA. He criticised the influence of multinationals, saying: "Negotiations have been going on since 2012 under their pressure.”

Green parliamentarian Anne Mahrer criticised the fact that TISA talks have been going on secretly and the State Secretariat for the Economy (SECO) has been leading the Swiss delegation without consulting parliament.

“It is not acceptable that a treaty of this importance is the privilege of the private sector. For the Greens the public sector is not negotiable,” she added.

Since 2012 a group of 23 countries plus the European Union have been secretly negotiating TISA, which seeks to free up trade in services such as communications and banking. The EU has described it as help to “kick start the stalled multilateral negotiations – the Doha Development Round” at the World Trade Organization (WTO).

This week’s talks in Geneva are reported to be a stocktaking exercise to advance topics such as domestic regulations, financial services, transport, telecommunications and the movement of people.

So far the TISA talks have taken place behind closed doors. However, public scrutiny over trade agreement negotiations has increased since the failure of the Anti-Counterfeiting Trade Agreement (ACTA) in Europe and the start of the Transatlantic Trade and Investment Partnership (TTIP) between Europe and the US.

The TISA negotiations were in the spotlight last week after WikiLeaks released 17 different documents related to the services pact. The texts included an annex on telecommunications services – an amendment that would standardise regulation of telecoms across member countries, according to WikiLeaks. Other documents relate to e-commerce, transportation of people and regulation of financial services corporations.

TISA negotiations, which are held outside the framework of WTO, are not expected to end before 2016.

In the United States, services account for 75% of economic output and 80% of private sector jobs; in the European Union, they account for almost 75% of the gross domestic product and employment.