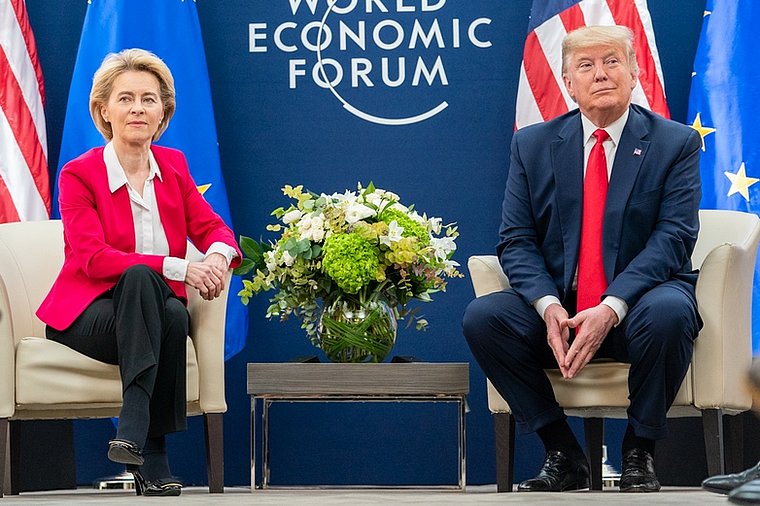 Questions and answers on the EU-US trade talks

Q: I thought TTIP was canceled – since when are the EU and US talking again?

A: The negotiations on the Transatlantic Trade and Investment Partnership (TTIP) between the EU and the US came to a halt in 2017, following massive protest from European citizens, and with Donald Trump taking presidential office. In 2018 Trump and then-President of the European Commission Juncker declared their intentions to get back on the negotiating table.

Link to the Joint Statement

Q: What are the reasons for the EU to talk trade with the US again?

A: Trump has been imposing punitive tariffs on several European products and industries. So far, this has not hurt the EU severely. But officials fear that sharp tariff increases in aluminum and steel could have negative impacts on industries heavily relying on exports, such as the German car industry. And this time, it seems, the EU is willing to make concessions in areas which it had considered off the table in TTIP times (e.g. agriculture and food).

Q: What interest does the US have in the talks?

A: The US has had a longstanding interest in seeing the EU lower tariffs and to remove so-called “non-tariff trade barriers” for US-American products. This concerns above all the agricultural sector. For example, the US have been pushing for market access for “genetically modified organisms” (GMO’s) such as crops in human food supplies, and for meat rinsed with chlorinate or acid. For the US, there has been two ways of getting such concessions. One way is that the EU simply decides to change its rules. The other is for the US to have an early say in the development of European regulations and standards. This approach - called “regulatory cooperation” – is highly dangerous, as it could threaten important regulatory objectives, such as the protection of consumers or the environment. That is why it is a bad sign that Trade Commissioner Hogan stated recently that he was investigating whether ‘regulatory cooperation’ could provide a solution to the current stale mate,

Link to complete US negotiations objectives

Q: What do the talks cover?

A: At the moment, it is very hard for the public to tell what exactly the EU and the US are discussing. Formally, the Council of the European Union decides what negotiations shall and shall not cover. In April 2019 the Council passed two mandates: one on the elimination of industrial tariffs, and one on an agreement on “conformity assessment”, that covers processes regarding the certification of foreign products on a domestic market and the accredation of bodies from the other Party’s territory which may conduct certification assessments. In other words, conformity assessment is about ways to make sure products are in line with agreed standards and regulations. Formally, talks on changing protection levels are outside the scope of negotiations on conformity assessment. For that and other reasons, the Commission has no space within the mandate to negotiate on changes in EU rulemaking on chlorinated chicken, GMOs or the maximum level of pesticide residues in agricultural products.

Q: This all sounds pretty harmless, what’s the big deal?

The EU-US talks are very problematic, for two main reasons:

A1) While talks in the area of tariffs came pretty much at a halt, the discussions about a conformity assessment agreement are advancing very quickly, and a first EU textual proposal was released in November 2019. Conformity assessment is basically one form of the dangerous “regulatory cooperation”, and the EU proposal doesn’t include safeguards to protect sensitive issues and poses a veritable threat to existing and future standards – here in Europe, but also for US citizens. What the EU is trying to do is to promote a form of conformity assessment that allows companies to approve their own products (Self Declaration of Conformity).

A2: We have strong reasons to believe that the Commission is acting beyond the scope that was agreed on by the Council. The above mentioned Joint Statement by Trump and Juncker already covered a much broader range of activities, namely: “exploration of trade facilitating actions“ in sectors such as “services, chemicals, pharmaceuticals, medical devices and soybeans“ and a “strategic cooperation on energy issues, including recognition of the goal of increasing EU imports of liquefied natural gas (LNG) from the US”. But this is not all: The US have made crystal clear that they want to see the EU giving up resistance on several crucial contested issues such as GMO’s. Most recently US secretary requested that EU leaders should be assertive in the confrontation with NGOs “spreading fear regarding hazard-based rather than risk-based approach”, and to make policy decisions based on sound science when it comes to food”. Make no mistake: This demand for a “risk-based approach” is only a veil for what is actually at stake: a regulation of food, production methods and protection rules based on the precautionary principle. And the EU seems more willing than ever to give it up to accommodate business interests.

Q: Are all (or which) of the EU’s member states are on board with this?

A: We do not have certain information about the discussions between the Commission and member states. We feel fairly certain the German government is supportive of the Commission’s move, but others are dissatisfied or even hostile. There are even indications that governments are not kept in the loop.

Q: Why has no one been drawing attention to this?

A: Many groups have voiced concern the recent year. The threat of high tariffs on European goods has taken its toll in the Commission and in some member states, and that led some to believe the risk of major concessions has been there for a while. That is why 22 civil society groups from across Europe sent a letter to the Commisison back in September. They asked the Commission to stick to its mandate only, and to keep the public informed. The Commission never responded.

Q: Does this relate to climate change?

A: Certainly. In many ways. If we take the most direct link first: if the Commission makes concessions on agriculture and food along the lines we fear, they will be supporting a form of agriculture that is toxic to the climate. Ironically, the Commission know all about it. In its ‘European Green Deal’ they make it an EU objective to cut the use of pesticides severely. But should they concede on ‘pesticide residues’ as demanded by the US negotiators, they would be supporting the use of pesticides in the US, obviously, but they could also undermine efforts in the EU to roll back their use around here. Farmers groups and pesticides lobbyists would be quick to say that competition threatens European agriculture if they cannot use the same pesticides on European soil.

Q: But what about the commitments the EU made when signing the Paris agreement?

A: Indeed, the Commission’s promise in it’s European Green Deal to “use diplomacy, trade and development co-operation to advance climate action” and its assertion that “the Paris Agreement is key for tacking climate change” ring out as hollow rhetoric. Instead of advancing as a champion for the Paris Agreement and climate change – the EU Commission is in fact radically retrenching on previous strong rhetoric from EU leaders and Parliamentarian that commitment to the Paris Agreement would be basic pre-requisite for trade (for example, the EU-Japan FTA specifically mentions commitment to the Paris agreement). The US will formally withdraw from the agreement on 4th November 2020. This alone should be reason enough for the EU to abolish trade relations with the US, but instead the Commission presses ahead with a US Trade agreement, abandoning its leverage, and compromising the a key driver for climate action in the US which is the highest producer of Greenhouse Gases on a per capita basis.

On top of this there are three further ironies:

✗ In the European Green Deal we are promised a new and greener trade policy. Yet, the negotiations with the US are – as it stands – pointing in the wrong direction. Not only from the viewpoint of food and agriculture, but from other angles too. For instance, following agreeement with the US, EU imports of liquid natural gas has shot up by 563 % from the summer of 2018 till end of 2019. ✗ In the European Green Deal it is vowed the EU should not sign ‘a comprehensive trade agreement’ with countries that do not support the Paris Agreement. While the current talks do not concern a comprehensive deal, the US Administration is the most antagonistic to the global climate effort. ✗ This is all happening mainly for one reason: Trump has made threats to impose high tariffs on European cars, one of the most climate-unfriendly commodities you can imagine.

What can my/our organisation do to stop this?

✔ Sign the statement: http://s2bnetwork.org/civil-society-statement- eu-us-trade-talks/ If you know about a group that should sign on as well, plz get in touch with them. We need a lot of signatories! ✔ The next thing to do could be to get on touch with parliamentarians in the European Parliament or your national parliament and alert them. We need to put governments under pressure to put the Commission under pressure.