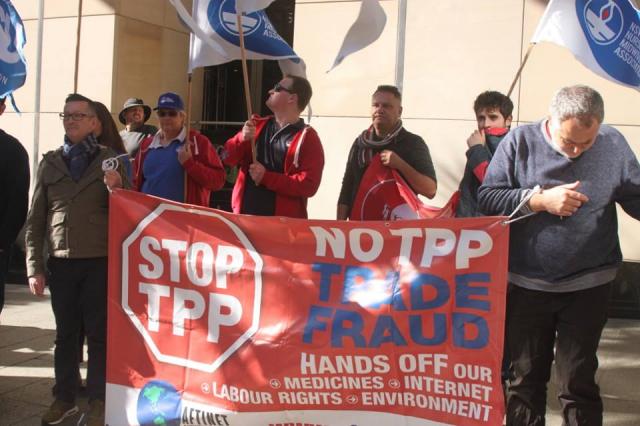 More than 100 members of unions, aid and development organisations, health, environment and other groups rallied in Sydney on June 15 outside the Federal Parliament’s Joint Standing Committee public hearing on the controversial Trans-Pacific Partnership (TPP)-11 trade agreement. The rally was organised by the Australian Fair Trade and Investment Network (AFTINET).

This standing committee and another Senate inquiry will report on the deal before Parliament considers the necessary legislation in September. The protesters called on Labor, the Greens and cross-bench senators to block the implementing legislation, and effectively stymie Australia’s participation in TPP-11.

Rally chair and AFTINET convenor Dr Patricia Ranald said: "The TPP-11 without the US is still a bad deal because it would increase corporate rights at the expense of people’s rights. It still includes special rights for global companies to bypass national courts and sue governments in unfair international tribunals over health, environment and industrial laws."

Australian Manufacturing Workers Union national president Andrew Dettmer said: "The TPP-11 is bad for workers because it has very weak commitments to labour rights, that are not enforceable, and does not even ban the products of child and slave labour. It would allow more temporary migrant workers who are vulnerable to exploitation, without first testing whether local workers are available."

Head of campaigns for Action Aid Australia Lucy Manne said: "In low-income countries, the TPP-11 would put pressure on sectors like the garment industry that are dominated by women, meaning that women could face lower wages and an erosion of their rights at work. The deal could also drive the privatisation of services, like health-care and education, which are essential for achieving gender equality."

Allen Hicks, from the Communication, Electrical and Plumbers Union, said: "We need to send a clear message about the dangers of the TPP-11. Among these, we need to demand proper skills assessment for licensed tradespeople, and insist that all free trade agreements such as the TPP-11 go through a full parliamentary endorsement process."

Jonathan Moylan, from Greenpeace Australia Pacific, said: "The biggest winners under this flawed agreement are mining executives who will have the right to sue governments for passing laws to protect places like the Great Barrier Reef. Malcolm Turnbull is dreaming if he thinks Australians will support a deal that puts more importance on the profits of multinational corporations than the health of the Australian people and the environment.”