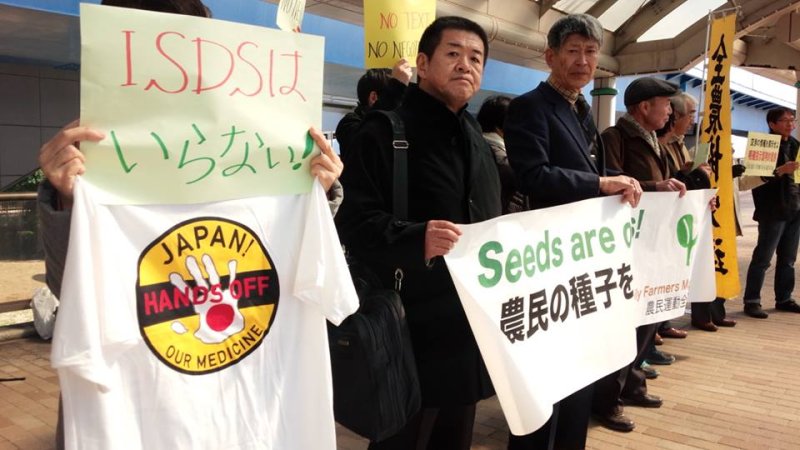 Trade Justice Pilipinas a broad platform campaigning for just trade and investment policies expresses its opposition to and calls on the public to resist international economic agreements like Regional Comprehensive Economic Partnership Agreement (RCEP) and other new generation FTAs that advance corporate agenda over peoples rights and welfare.

The demand was made as governments from 16 countries in the Asia-Pacific region converged in Kobe, Japan for the 17th round of negotiations for the Regional Comprehensive Economic Partnership Agreement (RCEP).

There is a stronger push for RCEP in the wake of the US withdrawal from the Trans Pacific Partnership Agreement (TPP). RCEP is now presented as tan alternative arena for advancing trade and investment agenda in the Asia Pacific Region.

What is being glossed over in the rush to conclude RCEP is that the deal that is being forged is cut in the same mold as TPP. Like TPP, RCEP is a new generation FTA that could further inequality and wealth concentration, environmental destruction and the climate crisis, and lead to more human rights violations and erosion of peoples’ rights in the region.

RCEP like TPP is advancing a corporate agenda that would threaten public health and peoples access to medicines. The strong push from Japan and Korea for TPP-provisions on intellectual property rights in the RCEP negotiations will make it harder for poor people in the region to access affordable medicines particularly life-saving drugs, and for governments to advance public health policies for the benefit of the poor.

RCEP like TPP is advancing the corporate agenda by pushing for an investment regime that will give corporations the right to sue the government over policies and regulations. Under the infamous Investor State Dispute Settlement Mechanism or ISDS, corporations are given the power to take legal action against the State in private and exclusive investment arbitration courts. ISDS, which has been highly criticized in the context of TPP negotiations, should be strongly rejected as well by governments across Asia as an instrument for weakening the right of State to regulate investments in the name of the greater public interest.

RCEP like TPP will further curtail the power of governments to use public policies to advance development agenda by putting in place prohibitions on performance requirement such as policies on domestic content and export restrictions, policies that favor employment of locals over foreign workers or even those that push for technology transfer.

Amidst the continuing backlash against globalization policies that have disenfranchised and marginalized the working class, the imperative is really to push back on RCEP and new generation trade and investment agreements that advance the corporate agenda over peoples’ interests.