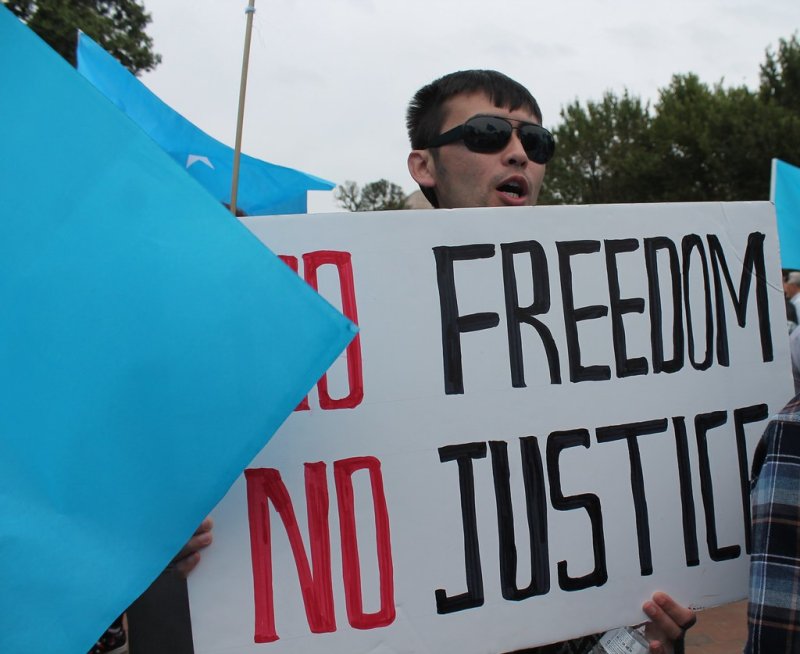 Campaigners are urging the Swiss government to renegotiate a six-year-old free trade agreement with China to try to improve human rights and labour conditions for its Uighur Muslim minority.

On Monday, the Society for Threatened Peoples, the Swiss Uighur Association and Campax handed in a petition to the Federal Chancellery in Bern signed by 23,000 people demanding the renegotiation of the free trade deal with China.

“The current free trade agreement between Switzerland and China does too little to prevent forced labour products from reaching Switzerland and even receiving tariff concessions," the Society for Threatened Peoples said in a statement.

The activists claim that at least one million Uighurs are being held in internment camps in Xinjiang province in northwest China and that tens of thousands of Uighurs are forced to work in factories on behalf of well-known international brands.

The groups warn that some medical masks used to combat Covid-19, for example, may have been made in labour camps in China. Will the United Nations soon be obsolete?

Is the international order capable of meeting the enormous challenges facing states and societies around the world?

They demand that the Swiss government introduce “binding clauses that demand respect for human rights” and “strong control mechanisms” into the free trade pact, which came into force in 2014. They also want employment and labour disputes to be brought before an arbitration tribunal.

“The situation of the Uighurs in East Turkestan is absolutely dramatic,” Lisa Mazzone, president of the Society for Threatened Peoples, told Swiss public radio, RTS, on Monday.

“It must be written down in black and white that human rights are respected, that forced labour is banned, and that a control mechanism must be set up to monitor this respect, as well as the possibility of bringing labour disputes before an arbitration tribunal,” Mazzone said.

The demand to the Swiss government comes as France, the United States and others also pressure China over the treatment of Uighurs in its Xinjiang region.

United Nations experts say at least a million ethnic Uighurs and other Muslims are held in detention centres in Xinjiang.

Switzerland enjoys important trade flows with China. It exported CHF21.4 billion ($23.4 billion) in goods to China in 2019, while importing goods worth CHF15.1 billion from China, according to official data.

The Swiss State Secretariat for Economic Affairs (SECO) told Reuters that there were already mechanisms to address concerns like those being raised, without the trade deal being overhauled.

“The Free Trade Agreement Switzerland-China already has several indirect references to human rights, so a revision is not necessary,” it said in a statement. “Human rights initiatives that have a link to the free trade agreement can be brought up in the agreement’s mixed committee.”

In an interview last month, Swiss Foreign Minister Ignazio Cassis declared that human rights violations were “on the rise” in China. He said relations were being put to the test and added that “if China abandons the ’one country, two systems’ principle in Hong Kong, it will affect Swiss companies invested there”.