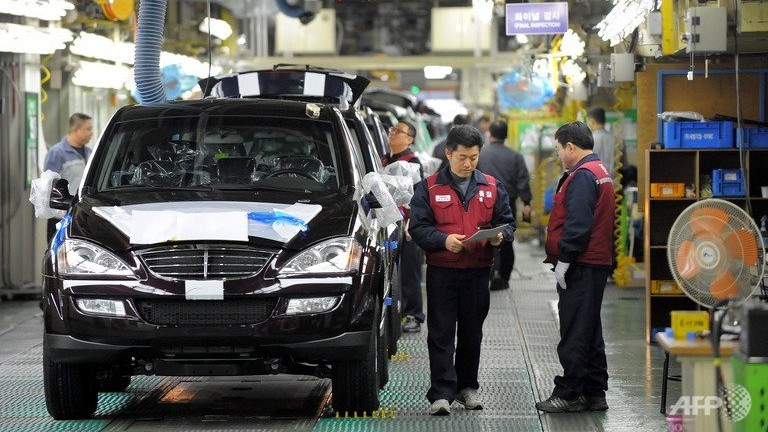 During their summit in Seoul, President Park Geun-hye and her Costa Rican counterpart Luis Guillermo Solis shared the need to accelerate the ongoing negotiations over the free trade agreement (FTA) that involves their countries and five others — Guatemala, El Salvador, Honduras, Nicaragua and Panama.

Seoul has been pushing to clinch the FTA with the Central American region to secure an upper hand in the automotive and steel markets against its competitors, China and Japan. The FTA would make South Korea the first Asian country to ink such a pact with the region.

Since their official FTA negotiations began in June last year, South Korea and the six countries have held six rounds of talks with the former seeking to establish a solid business foothold in the region.

Last year, the total gross domestic product of the six Central American countries reached US$224.7 billion with their combined population estimated at 44.2 million.

Trade volume between South Korea and the six countries rose to a record high of $6.5 billion in 2009 but dipped to $4 billion last year. South Korea exports such products as cars and synthetic resins to them and imports coffee, sugar, fruit and minerals.

Solis said that the FTA will be mutually beneficial for all seven countries, as it could create a new market for them.

During the summit, the two leaders also agreed to elevate their relationship to a "comprehensive and cooperative" partnership and expand the scope of their cooperation into new areas such as information and communications technologies, the environment and health care.

Stressing South Korea’s experience and technologies in infrastructure development, Park expressed her expectation that South Korean firms will be able to better participate in Costa Rican projects to construct a new airport, roads and other facilities.

Solis, in response, said that his country would make "active" diplomatic efforts to criticize Pyongyang’s nuclear and missile provocations and its human rights violations at the level of the Central American Integration System (SICA).

Next year, Costa Rica will take the chairmanship of SICA, the integrated regional political and economic institution that consists of eight Central American states including El Salvador, Guatemala and Panama.

Following Wednesday’s summit, South Korea and Costa Rica signed seven memorandums of understanding (MOUs), mostly over bilateral economic cooperation. Park and Solis oversaw the signing of four of them, including one over public security cooperation.

Three of the MOUs aim to bolster bilateral trade and investment. One of the three involves an arrangement to strengthen technological cooperation to help the two nations’ small and medium-sized enterprises sharpen their competitiveness.

The package of the MOUs also includes one on exchanging taxation-related information that Seoul believes will help lay the foundation for bilateral efforts to prevent offshore tax evasion.

The two sides, in addition, signed an agreement to cooperate in the "creative economy" realm. The creative economy refers to Park’s much-trumpeted growth strategy that seeks to create new business opportunities, jobs and industries through the fusion of new technologies, culture and other available elements.

Under this MOU, Seoul expects some South Korean businesses to join Costa Rica’s ongoing efforts to establish the "National Science and Technology Information Service," a system to offer comprehensive information on state-led research and development projects.

On the occasion of the summit, the two countries also agreed to sign an arrangement this year on cooperation in road building. This arrangement is likely to pave the way for South Korean companies to better participate in the Central American country’s large-scale road construction project, Seoul officials said.

The presidential office, moreover, said that South Korea is seeking to participate in a Costa Rican project — worth $160 million — to build a power plant in the Costa Rican capital of San Jose that generates electricity by incinerating daily waste. The project has been developed as part of bilateral cooperation under a 2013 MOU on waste management.