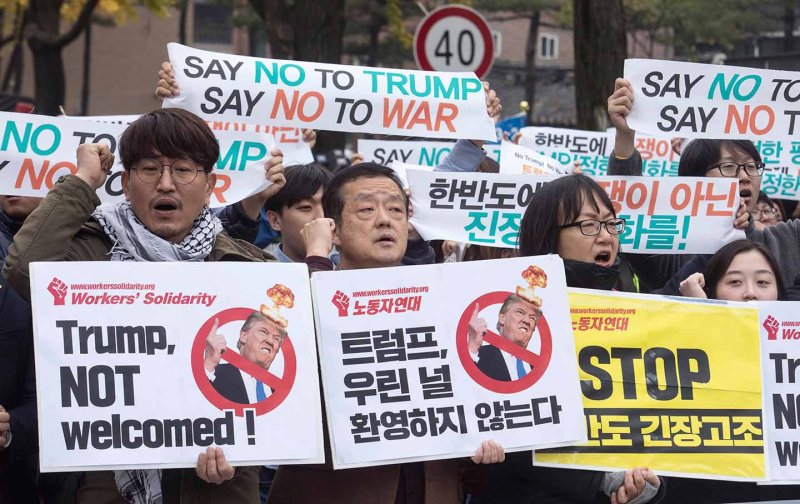 S. Korea, US to speed up FTA renegotiations

South Korea and the United States are expected to speed up the process to amend their free trade pact as U.S. President Donald Trump called for fair deal that can correct the imbalance in the movement of goods between the two countries during the summit meeting on Tuesday.

On the first day of his two-day visit to Seoul for talks with South Korean President Moon Jae-in, Trump called the five-year free trade agreement (FTA) "quite unsuccessful and not very good for the United States" and hoped to make progress in rewriting its terms.

"Currently we are looking at ways of improving our economic relationship," Trump said during a joint press conference at the presidential office Cheong Wa Dae. "I feel confident we’ll be able to reach a free, fair and reciprocal trade deal."

Moon struck a similar note : "We agreed to hold talks to renegotiate FTA as soon as possible to enjoy the benefit of a free, fair and reciprocal trade deal."

Trump, who styles himself a "dealmaker," linked security issues with trade by thanking Seoul’s decision to purchase U.S. state-of-art weapons, "whether it’s planes, whether it’s missiles, no matter what it is."

"South Korea will be ordering billions of dollars of that equipment, which for them makes a lot of sense and for us it means jobs, reducing our trade deficit with South Korea," Trump said. The chief executive referred to the pact commonly known as the KORUS FTA as a "job killer" during his election campaign and even threatened to ax the agreement if problems are not corrected.

The president didn’t single out a particular industry that could be causing the deficit for the United States, but left the matter to negotiators.

On the second day of the president’s visit, South Korean trade minister Kim Hyun-chong is expected to meet with his U.S. counterpart, Robert Lighthizer, a ministry official said, noting the two sides are currently coordinating the schedule.

It will be their third meeting after two in Washington, in which they agreed to take steps to revise the pact that went into effect in March 2012.

South Korea is the U.S.’ seventh-largest trading partner, while the U.S. is South Korea’s second-biggest partner after China.

As the two leaders agreed to accelerate the renegotiation process, the Ministry of Trade, Industry and Energy will hold a public hearing on Friday to collect opinions on the open trade agreement. It will then conduct an economic feasibility study and notify the parliament of the process.

Experts say efforts to narrow the trade gap are expected to focus in the auto and steel sectors, meaning the administration may push to increase the number of American-made cars that can be sold in South Korea.

South Korea’s safety and environmental regulations on vehicles could also be covered as American automakers have claimed the rules are part of "non-tariff barriers" on their products.

While Washington may call for lowering barriers in the agricultural sector, Seoul officials have voiced opposition out of concerns of strong protests from farmers.

South Korea’s agricultural goods and meat exports to the U.S. reached US$716 million last year while imports amounted to $6.9 billion, according to the agriculture ministry.

The country’s trade deficit with the U.S. in this sector reached $6.14 billion in 2016, the data showed.