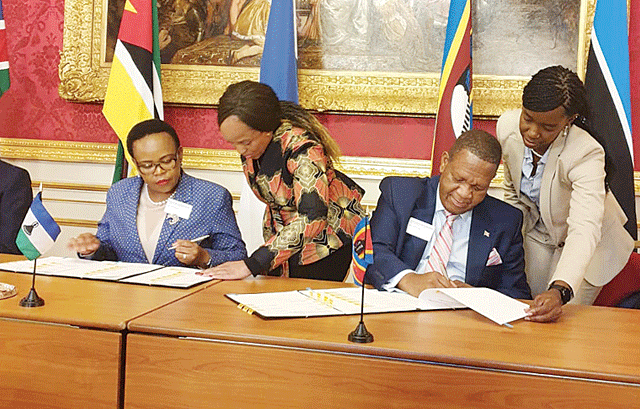 The Ministers responsible for Trade and Industry and authorised representatives from the SACU Member States, the Republic of Mozambique and the United Kingdom of Great Britain and Northern Ireland, met on the 09 October, in London, United Kingdom, to sign the Economic Partnership Agreement.

Hon Tjekero Tweya, Minister of Industrialization, Trade and SME Development signed the agreement on behalf of Namibia. The agreement is intended to provide continuity and certainty in trade amongst the parties, when the United Kingdom is no longer a member of the European Union.

The ministers reaffirmed the importance of ensuring a smooth implementation of the agreement to achieve its intended objectives through the finalisation of the ratification processes.

The signing of the agreement comes fresh after SACU Member States and the Republic of Mozambique on the one part, and the United Kingdom of Great Britain and Northern Ireland on the other part, concluded the negotiations on the Economic Partnership Agreement on 08 September 2019, in Gaborone, Botswana.