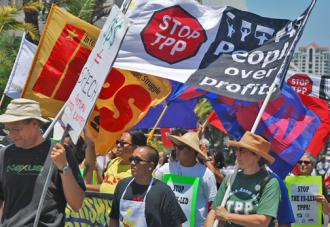 San Diego says no to the TPP

Rick Greenblatt reports on the Obama administration’s secret negotiations for a new free-trade agreement—and the voices raised in dissent against it in San Diego.

MEETING IN secret session behind closed doors, trade negotiators from the U.S. and a number of Pacific Rim nations were greeted by a weeklong series of protests and teach-ins in San Diego in early July.

The San Diego meetings were the 13th round of talks to create a Trans-Pacific Partnership (TPP) agreement. TPP is a free trade deal that has been under development for a decade. Eleven Pacific Rim nations—Brunei, Chile, Singapore, New Zealand, U.S., Australia, Peru, Vietnam, Malaysia, Mexico and Canada—from four continents are involved in the negotiations. Japan and South Korea have observer status.

The principal purpose of the TPP, like the North American Free Trade Agreement (NAFTA) that went into effect in 1994, is to increase trade and remove restrictions on the flow of goods and capital between member states. The further aim is to safeguard rights for private investors and open up the region in order to generate increased profits for multinational corporations.

Although the U.S. has been working actively to create the TPP, the negotiations have taken place largely under the radar until recently. In fact, most people have never heard of the TPP or know what it stands for.

In San Diego, a Stop TPP coalition was organized on short notice to bring attention to the treaty negotiations through an ambitious array of protest marches, rallies, street theater, press conferences and teach-ins. There was almost one event per day during the week of meetings from July 2-10.

Following a Stop TPP "pots and pans" march thorough downtown San Diego on July 7, San Diego Occupy activist Brother Hexagon told 200 demonstrators that TPP puts "global corporations in the driver’s seat. It is proven that in secret free-trade agreements, like the Trans-Pacific Partnership, which undermine even governments, the aim is to keep the 1 percent filthy, bloody, oily, utterly rich."

FREE-TRADE (or "economic partnership") agreements, of which NAFTA is probably the best-known example in the U.S., are an important component of the neoliberal strategy to increase profits at the expense of working-class living standards internationally. By allowing capital to flow freely across borders, while restricting organizing rights and the free flow of labor, these agreements are designed to drive wages and working conditions into the ground in the name of "free trade."

The TPP is no different. For now, it is impossible for us to know in detail what the TPP will look like. The negotiations are held behind closed doors, open only to the negotiators themselves and a carefully selected group of about 600 corporate lobbyists. The details will be kept secret until Congress is asked to ratify the treaty.

Through the work of Public Citizen and Global Trade Watch, as well as through leaked negotiating documents, it has been possible to get some idea of the issues under discussion beyond the usual goal of reducing tariffs.

One of the most controversial is a program of financial deregulation, which would permit the unhindered entry of derivatives, hedge funds and currency speculators into the Pacific Rim. This is an issue of particular importance to the smaller nations that experienced catastrophic economic devastation during the 1997 Asian economic crisis as a result of currency speculation.

The TPP will almost certainly include the establishment of "investor-state tribunals" to resolve conflicts between corporations and governments. These so-called tribunals are actually arbitration agreements that permit transnational institutions to overrule local courts and other government agencies, if the arbitrators find that they conflict with corporate rights under the treaty.

In addition to being clearly undemocratic, this can have a significant impact on the environment. When profits come into conflict with environmental protection, it is not hard to guess how the neoliberal arbitrators will rule, as they have already in similar agreements in Central America.

Patent and intellectual property rights have also figured prominently in recent TPP negotiating rounds. The pharmaceutical industry wants to extend its profitable drug patent protections, making these essential medicines more expensive for those whose lives depend on them.

Economic partnership agreements, like the TPP, are one way to carve out regional spheres of influence at the expense of competitors. In the case of the TPP, the main U.S. competitor is China. Although Obama’s trade representative Ron Kirk claims that China is welcome to join the TPP, U.S. policy is moving in the opposite direction. During Secretary of State Hillary Clinton’s recent tour of Asian countries, her principal goal was to encourage closer economic relations between South Asian nations and the U.S. at the expense of China.

For its part, China has been developing its own competing trade alliance, called ASEAN+3, some of whose members are also involved with the TPP negotiations. This comes at a time when the U.S. military is deploying additional naval and marine forces to East Asia, targeting China.

IN THE U.S., Congress must approve treaties. If and when it does so, the treaties become law, potentially overriding federal, state and local legislation with which they might conflict. Historically, both Democratic and Republican administrations have asked Congress to grant them "fast-track" approval of trade agreements. This is a method of legislative approval that severely limits debate and prevents Congress from amending treaties that have been negotiated.

Although fast-track authorization expired in 2007, Obama has made it clear that he will request the renewal of fast-track powers in 2013 with the specific purpose of increasing the chance that Congress approves the TPP.

So we have a treaty whose details are being negotiated in secret, which will then be provided to Congress in finished form and with only limited time for debate before the body holds an up-or-down vote on the trade pact.

Obama’s support for the TPP is clear and unequivocal. This has caused some embarrassment among Obama supporters who oppose the TPP. Some simply ignore his support (at least in public) while others seem genuinely confused. However, the role of both major parties, along with presidents Clinton, Bush and Obama, has been consistent: they all support neoliberal free trade agreements like the TPP because their interests coincide with profit-driven financiers and industrialists, not workers.

The passage of free trade agreements is not inevitable. The history of the failed Free Trade of the Americas (FTAA) agreement a decade ago shows this. The FTAA was an attempt by the U.S. to expand NAFTA to include all of Latin America, with the exception of Cuba.

However, the FTAA was allowed to die as a result of two factors. One was the worldwide anti-globalization upsurge, including massive demonstrations around the world. The other was the opposition of Latin American governments to expanded U.S. economic influence. Venezuela and Brazil, in particular, saw the FTAA as an attack on their national economies by the U.S. Venezuela’s President Hugo Chavez called the FTAA "an annexation plan" and a "tool of imperialism."

As with NAFTA, the AFL-CIO has voiced its opposition to the TPP. While this is welcome, an opposition that is based on a protectionist "Buy American" program will cut off U.S. workers from their strongest allies—the workers of other Pacific Rim nations. As the opposition to FTAA showed, international working-class solidarity is not only necessary, but also realistic, in creating effective opposition to the TPP.