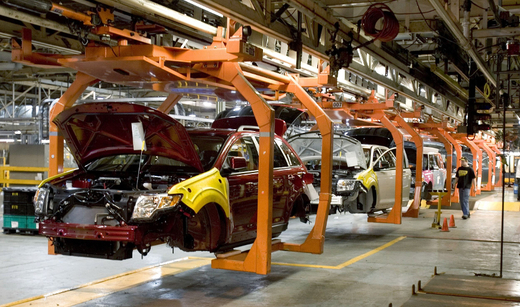 South Korea’s auto industry accounts for 70 to 80 percent of the nation’s trade surplus with the US.

Second round of Korea- US FTA talks

South Korea and the United States have wrapped up their second round of talks on the possible revision of their bilateral free trade agreement or FTA. The talks took place on January 31 and February 1, lasting from 9 a.m. to 7 p.m. each day. After the grueling negotiations, South Korean Trade Minister Kim Hyun-chong said that the two sides engaged in intense discussions and there is still a long way to go. Here is Professor Chung In-gyo from the International Trade Department at Inha University to examine the latest FTA talks between South Korea and the US

The negotiations last week signal a full-fledged tug-of-war between South Korea and the US over the amendment of their FTA. Details of the talks were not disclosed to the public, but the two sides reportedly held heated discussions on key agenda items, with the South Korean side making strong demands.

South Korea and the US confirmed what the other side was interested in during the first round of talks, which were held in the US on January 5. Based on the result, the two sides discussed details about their respective positions at the second round of negotiations. It is said that Washington’s major concern was automobiles and auto parts.

Since last year, the US has demanded that South Korea drastically reduce its trade surplus with the US The US has made a number of requests related to automobiles, in particular, including tariffs on autos and automotive parts, safety regulations, environmental standards on greenhouse gas emissions and the rules of origin. The rules of origin might pose a great burden on the South Korean auto parts industry. The US is already pushing for a higher percentage of American auto parts to be used by its major trading partners in the North American Free Trade Agreement or NAFTA renegotiations. According to NAFTA provisions, 62.5 percent of auto parts exported to the US should be produced within the US, Canada and Mexico. But the US is now demanding that the proportion increase to 85 percent. The US has made a similar request in its FTA negotiations with South Korea, although it didn’t mention specific percentages. The request might not be a big problem right now, but as time goes by, it will deal a heavy blow to the Korean auto industry as well.

During the first round of FTA talks, the US showed great interest in the abolishment of the non-tariff barrier on vehicles and stronger rules of origin for auto parts. This time, too, the US was focused on automobiles. Both sides agreed not to release the details of the negotiations to the public, but the US is said to have raised issues about trade imbalance particularly on automobiles, such as the need for an increased use of American-made parts on Korean autos exported to the States and South Korea’s safety and environmental regulations, which are considered a stumbling block in the way of exporting US’ vehicles to South Korea. Why is the US targeting the Korean auto industry?

South Korea’s auto industry accounts for 70 to 80 percent of the nation’s trade surplus with the US So the US believes the auto trade between the two nations should be adjusted by all means to improve trade balance. It is true that South Korean auto exports to the US have increased significantly for the past four to five years. The US considers this a thorn in their side.

Last year, South Korea exported automobiles worth 14.6 billion dollars to the US, with automobiles making up 72 percent of Korea’s trade surplus with the US Also last year, auto parts were Korea’s third-biggest export item to the US It seems Washington has its eyes on automobiles in order to recover its trade imbalance. The US delegation stepped up the level of pressure at the recent negotiations, apparently in line with US President Donald Trump’s State of the Union address. In his speech on January 30, Trump underlined trade protectionism once again. In response, the South Korean side stressed that Korea’s imports of American cars have soared 140 percent since the implementation of the Korea-US FTA, which has contributed to promoting mutual benefits. Also, South Korea requested that the US ease its recent safeguard measures against South Korean washing machines and solar panels and raised issue with some of the clauses concerning the system of investor-state dispute settlement, or ISDS.

The trade authorities have mentioned the need to revise the ISDS clause. Last month, Trump signed steep safeguard tariffs on washing machines and solar panels, including those from South Korea. South Korea is concerned about potential fallout from the measures, and it has made a strong complaint about the safeguard action in a strategic move to blunt the edge of Washington’s other requests. I’m sure Korea could ease the safeguard content to some extent to its own advantage. The US has yet to abolish tariffs on some goods. South Korea might request that the US quickly eliminate the remaining tariffs, or at least a few of them.

Trade Minister Kim Hyun-chong said that the recent negotiations touched on such issues as Washington’s safeguard action, anti-dumping tariffs, ISDS, anti-dumping investigation methods and automobile market access. South Korea took issue with the unfairness of Washington’s safeguard measures, in particular, and strongly requested that the US withdraw or ease the measures. Korea also demanded the revision of the ISDS clause. Under the ISDA provision, foreign investors can sue countries if they suffer damage as a result of the countries’ laws or systems. It seems South Korea and the US engaged in a fierce war of nerves at the latest FTA talks over the balance of conflicting interests. But the two sides failed to reach any meaningful agreement, as they did in previous negotiations. They will convene the third round of talks in a few weeks, but a bumpy road is anticipated due to their widely differing views on major issues. Negotiations might take a considerable amount of time before the two sides come to a final agreement. How should South Korea deal with future negotiations?

The two countries are still in the early stage of their negotiations, so I imagine neither side put all the cards on the table at the recent talks. They probably focused on only a few issues to put pressure on the other side. But they did show some important cards, and future talks will be centered on those issues. Needless to say, the US is a very important market. South Korea needs to employ a smart strategy to come to an understanding swiftly by narrowing the scope of negotiations, if possible. But it’s also necessary to adjust the pace by reaching any decision after South Korea’s local elections in June so the result of the negotiations will not be exploited politically.

FTAs have been a driving force behind South Korea’s exports. Outbound shipments to countries with which South Korea signed an FTA have contributed to the nation’s growing exports. Korea has a crucial and challenging task of ending the FTA negotiations with the US successfully. It should devise a wise strategy to get what it really needs, even while giving some concessions.