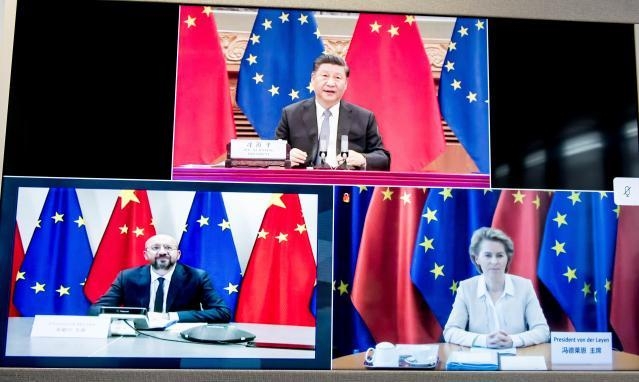 When the EU-China summit finally took place via video conference, three months later than planned, not much actually came of the meeting, the first of a series scheduled for 2020. President of the European Council Charles Michel, President of the European Commission Ursula von der Leyen and Chinese Prime Minister Li Keqiang conferred for over six hours, with Chinese President Xi Jinping occasionally intervening.

"Engaging and cooperating with China is both an opportunity and necessity," Michel and von der Leyen said in a statement.

With neither side interested in stirring up trouble, the two agreed to together more closely to try to develop a vaccine for the novel coronavirus, as well as to finalize the investment agreement that they have been working on for over six years.

This will not be easy, however.

"We continue to have an unbalanced trade and investment relationship,’’ said von der Leyen after the digital meeting, during which the main bones of contention were the skewed market access for EU companies in China and China’s handling of the coronavirus pandemic.

China also sees the relationship as being unbalanced, pointing out that the EU has been able to invest much more in China over the years than the other way around and lamenting the fact that the EU gets involved in what China regards as domestic affairs, for example with regard to Hong Kong.

Considering these views, it was not that surprising that there was no joint Chinese-EU declaration at the end of the summit.

What is clear is that the EU’s China year, the highlight of which was supposed to be a big summit in Leipzig in September, which has also been postponed, is not going as Brussels would have hoped.

Not only does the eurozone face the most significant economic challenges in decades in the wake of the coronavirus pandemic, it has also become blatantly obvious how dependent it is on China. Beijing repeatedly made this point, saying that although the EU was China’s biggest trading partner until recently, it had been pipped to the post by the Association of Southeast Asian Nations (ASEAN) in the first quarter of this year.

In Beijing, there seems to be an assumption that this will remain the case for some time as Asia looks set to recover more quickly from the pandemic than the EU. A pan-Asian free trade agreement is supposed to be sealed this year.

The shift of power is not making it any easier to work on the EU-China Comprehensive Investment Agreement that Brussels and Beijing have been fine-tuning.

German Chancellor Angela Merkel had hoped the agreement would be signed in September. As Germany prepares to take up the six-month presidency of the Council of Europe next week, she has placed China at the top of her international priorities.

Von der Leyen has requested that a draft be ready by early fall. However, for this to happen Beijing will have to agree to "substantial obligations" regarding transparency in technology transfer and subsidies for Chinese businesses that shut out foreign businesses from the market.

It was quite clear from the summit that Beijing will not simply do as Brussels wants. The Chinese government’s priority is to stabilize its own economy and fight unemployment. To do this, it is willing to put the Paris Agreement’s climate goals on hold. This year, Beijing has already approved as many new coal power plants as in the whole of last year. The major emissions trade scheme that it had announced is currently on the backburner. While climate activists fear that climate goals will not be met, economic planners worry that strict regulations to protect the environment would only further curb economic growth. The latter tend to be those with a say.

The negotiations have also not been made easier by the fact that the EU has tightened rules regarding the acquisition of businesses of systemic relevance. Nor by the fact that the European Commission has decided to impose punitive tariffs on companies whose headquarters are not in China, but which still get state subsidies, for example two Egypt-based subsidiaries of the China National Building Materials Group Corp. Whether these tariffs will function as an instrument of pressure will become clear over the next few weeks. The hope in Brussels is that if subsidized products cannot enter the European market, the planners of Beijing’s Belt and Road Initiative will rethink their strategy. Europe remains one of the most important markets for this massive infrastructure project.

The European Commission recently adopted a white paper dealing with the distortive effects caused by foreign subsidies in the single market to make it more difficult to acquire European companies. Many of these are struggling in the wake of the pandemic and apparently more open to takeover negotiations with Chinese actors. Though China is not named in the document, the EU is apparently worried that Chinese companies could make the most of the current economic difficulties — as many did during the 2008/9 financial crisis — to acquire European businesses.

Back then, Brussels seemed unwilling or unable to take the consequences for the EU into account, namely that China’s political influence would grow. This time, the situation is different.

"The current geopolitical context and global economic environment is the most difficult in recent history," European Commission Vice President Margrethe Vestager recently said. "The role of the Commission is to uphold the single market and to take action when third-country subsidies subsidize companies and distort the level playing field within our Union."

Chinese investment in the EU has been decreasing. Whereas it amounted €18 billion in 2018, it fell to €12 billion in 2019, almost 2013 levels. On the other hand, more and more European companies are investing in China. In 2018, Germany alone invested €90 billion into new factories. In a recent study by the European Union Chamber of Commerce in China, nine out of 10 European companies surveyed said they did not want to move their investments to other countries.

The problem, however, is that if European companies produce and sell goods in China, there is little impact on the European economy — no jobs are created and no taxes come in.

It is clear that Beijing will continue to try to wield influence in Europe via bilateral agreements. The less united the EU is, the less China has to listen to Brussels. So far, China’s long-term strategy seems to be paying off.

Countries such as Hungary and Greece, as well as the G7 member Italy, have been ensnared by China.

The coronavirus pandemic is also a good opportunity for Beijing to slow the tempo when it comes to meeting Brussels’ demands.

Frank Sieren has lived in Beijing for over 20 years.