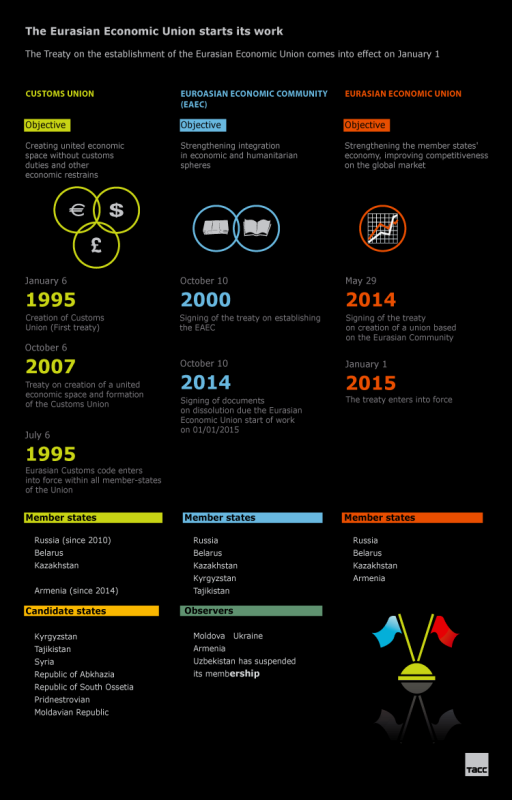 The Treaty on the establishment of the Eurasian Economic Union comes into effect on January 1. Infographic by TASS.

ASTANA, November 24. /TASS/. Around 40 states have plans to establish a free trade zone with the Eurasian Economic Union (EEU), the speaker of Russia’s lower house of parliament, the State Duma, Sergey Naryshkin, told an international conference in Kazakhstan’s capital Astana on Monday.

“Five countries of the Commonwealth of Independent States (CIS) have already made a Eurasian choice, and another 40 countries across the world have officially voiced their wish to set up a free trade zone with our integration association,” Naryshkin said.

The Eurasian Economic Union, which comes into force in January 2015, offers a unique chance for cooperation between Western Europe and the Asia-Pacific Region, the lawmaker said. The EEU members are currently Russia, Belarus, Kazakhstan and Armenia. Kyrgyzstan is expected to join the union soon.

Naryshkin said those who consider the EEU as a threat only confirm that “a new and serious geopolitical player is indeed emerging in the world.” “It will probably build those lacking bridges which will unite Western Europe with the dynamic Asia-Pacific Region,” he stressed.

The lawmaker warned against regarding the new bloc as a threat, saying it gives a “unique chance in which the peoples of Europe, Asia and the world in general are strategically interested.”

“We see what interest other states have in the Eurasian Economic Union. I am sure it will enlarge and strengthen,” he said.

The Kazakh Senate’s Chairman Kasym-Zhomart Tokayev noted the significance of the EEU formation. “It is an adequate response to what is happening in the world and to world economy shocks,” he said.

The idea of Eurasian integration was voiced first by Kazakhstan’s President Nursultan Nazarbayev in 1994. Finally, the Eurasian Economic Union has been formed and will begin working on January 1, 2015.

The first attempt to form an economic international organization was made when the Commonwealth of Independent States concluded an agreement on an economic union, but the project was not implemented.

In 1995, Russia and Belarus signed an agreement on a customs union, which was joined by Kazakhstan, Kyrgyzstan and Tajikistan.

The countries concluded an agreement on the Customs Union and the common economic space in 1999 to build a common market.

In 2009, the Russian, Belarusian and Kazakh presidents agreed on a deeper economic integration form - the Common Economic Space.

The three agreements on the Eurasian Economic Union, the Customs Union and the Common Economic Space are open for other states to join.