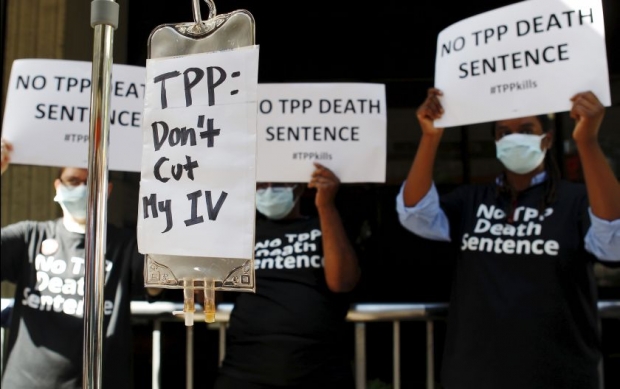 Here are some highlights of the 12-country Trans-Pacific Partnership agreement as described by the Canadian government Monday as it shared details of a deal to create the largest-ever regional trading bloc.

The full text is not yet released, and the agreement would need to be ratified by the parliaments and governments of all 12 countries to come into effect.

If implemented, the agreement could mean:

— Elimination or reduction of tariffs on a broad series of products including pork, fruits, wines and spirits, canola, barley, machinery, minerals and forestry products. As one example, the beef industry expects to see exports triple to Japan, with a multi-year phase-out in tariffs there from 39 per cent to nine per cent.

— More foreign car parts likely entering Canada, likely benefiting producers and consumers but hurting some auto workers. Cars will be allowed without tariffs as long as they have 45-per-cent content from the TPP region. That’s significantly down from the 62.5 per cent regional-content provision under NAFTA, which mostly kept out pieces from places like China and Thailand. But the formula is more complex than that: the government says it will "encourage" producers to use Canadian ingredients, parts and materials when making goods exported to other TPP countries.

— Canada’s protected dairy sector remains mostly intact. Currently, 10 per cent is set aside for foreign products. Now another 3.25 per cent share of imports would be allowed. An even smaller rate of imports will be allowed for supply-managed sectors including eggs, chicken and turkey.

— Farmers will be compensated for losses under the TPP and the recent Canada-EU deal, through a multibillion-dollar series of programs. The most important will see farmers paid up-front annually over 10 years to maintain 100 per cent income protection, and the program would taper off the five following years. The program is worth $2.4 billion. Smaller programs apply to quota-protection, modernizing equipment, and marketing assistance.

— Buy American provisions won’t disappear. The deal does not eliminate buy-local provisions for state- and municipal-level infrastructure projects. But it does simplify bidding for contracts with six regional U.S. power authorities, and also addresses sub-national procurement with some smaller countries.

— Better labour mobility for some high-skilled and business workers.

— Next-generation pharmaceuticals, including cell-based biologics, will have patent-style protections for eight years. That’s in line with Canadian policy, but will disappoint some countries who declared anything beyond five years would be unacceptably expensive for patients and taxpayers.

— Rules protecting the digital economy, and practices likes cloud computing. It would prevent national governments from cutting off data flows, by limiting laws that require local storage of data.

— State-owned enterprises will face more regulation. Companies backed by governments will have new transparency requirements and rules when competing with private companies. The government says cultural exemptions would protect the CBC and Telefilm Canada.