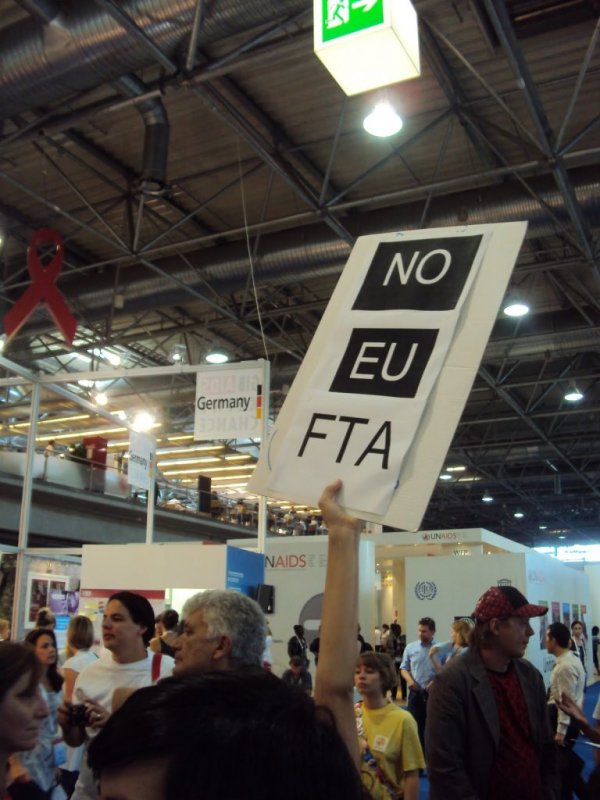 EU-MERCOSUR trade negotiations must not impose TRIPS Plus provisions on protection and enforcement of intellectual property rights.

The South Centre is deeply concerned over intellectual property rights (IPRs) provisions put forward by the European Commission in the negotiations for a free trade agreement (FTA) between the European Union and the Mercosur.

The provisions proposed by the European Commission include patent term extension, accession to the 1991 UPOV Convention, trade secret protection, data exclusivity and a number of other TRIPS plus provisions. Continued pressures on Mercosur countries to adopt such IPRs provisions that go beyond the minimum standards in the TRIPS Agreement would have adverse social and developmental effects, particularly on the public’s access to medicines and on farmers’ access to agricultural inputs.

Extension of the patent term to compensate for “unreasonable” delays in the grant of marketing approval of a medicinal product or a plant protection product essentially penalizes the public with a longer extended monopoly for the failure of the administration to process patent or marketing approval applications within a reasonable time. This also puts pressure on the authorities to make decisions without sufficient consideration of issues that may lead to a denial of regulatory approval for the application.

The European Commission has also reportedly proposed in the FTA to include provisions that submit test data to a regime of exclusivity. However, data exclusivity is not a requirement by the TRIPS Agreement, which only requires the protection of such data against unfair competition. Thus, a country’s regulatory authority can consider the clinical test data of a company to give safety or efficacy approval for equivalent generic products. The grant of exclusive rights to an originator company over the test data can make it impossible for generic competitors to market affordable generic versions, even in the absence of patent protection. It would thus generate costs without any benefits to local companies or the public.

The European Commission has also proposed provisions on IPRs that are above the requirements of the TRIPS Agreement. The proposed provisions require, inter alia, judicial authorities to adopt provisional measures ordering seizure of allegedly infringing goods and the materials or implements used in their manufacture or distribution. The proposed border measures may create barriers to legitimate trade. Measures such as seizure of suspected infringing goods by customs authorities would be extended to infringements of all forms of IPRs and beyond the terms required by the TRIPS Agreement, which limits the applicability of border measures to trademark counterfeiting and copyright piracy.

It should be recalled that in 2007 the European Parliament adopted a resolution on the TRIPS Agreement and Access to Medicines that called upon the EU Council to “…meet its commitments to the Doha Declaration and to restrict the Commission’s mandate so as to prevent it from negotiating pharmaceutical-related TRIPS-plus provisions affecting public health and access to medicines, such as data exclusivity, patent extensions and limitation of grounds of compulsory licenses, within the framework of … future bilateral and regional agreements with developing countries.”[1] The Communication from the European Commission of 1 July 2014 on ‘Trade, growth and intellectual property - Strategy for the protection and enforcement of intellectual property rights in third countries’ stated that the European Union should ensure that any multilateral and bilateral agreement supports the Doha Declaration on TRIPS and Public Health and pledged to support developing countries’ implementation of the TRIPS Agreement — including its flexibilities.[2] The European Parliament resolution of 5 July 2016 on ‘A new forward-looking and innovative future strategy for trade and investment‘ reminded the Council to meet its commitments to the Doha Declaration by ensuring that the Commission explicitly guarantees access to medicine when negotiating pharmaceutical-related provisions within the framework of future bilateral and regional trade agreements with developing countries.[3] On March 2, 2017, the European Parliament adopted a new resolution unambiguously calling for the respect of the TRIPS flexibilities and for their effective implementation.[4]

The 20 June 2017 Declaration on Access to Medicines, Public Health and IP by the health ministers of Argentina, Brazil, Paraguay and Uruguay also stresses on the importance of prioritizing public health in the negotiation of free trade agreements. This is in accordance with the recommendation of the UN Secretary General’s High Level Panel on Access to Medicines which recommended that governments should undertake public health impact assessments of provisions in free trade agreements.

It is also noteworthy that on 11 November 2017, Ministers of the countries participating in negotiations for the Comprehensive and Progressive Agreement for Trans-Pacific Partnership (CPTPP) suspended some of the TRIPS plus provisions that are detrimental to the functioning of competitive markets and public health.[5] Such provisions include patent term extensions and test data exclusivity.

The South Centre urges the European Commission to respect the right of Mercosur countries to implement, consistently with international law, IPRs policies that are compatible with their level of development and public needs, and to abandon its demands for TRIPS plus protections that will have negative social and economic effects in such countries.