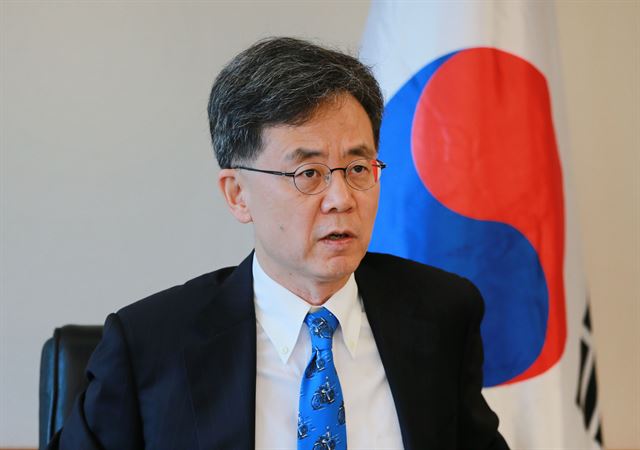 Sejong: A recently revised trade deal between South Korea and the United States and currency policy are separate matters, but Washington’s associating the two may be aimed at highlighting its achievement during the negotiations, Seoul’s trade minister said Thursday.

South Korea said last week it will further open its auto market to the US in exchange for an exemption from steel tariffs during negotiations to amend their six-year-old free trade agreement (FTA).

Washington later said the revised FTA will include a side deal prohibiting both countries from deliberately devaluing their currencies for trade advantages, sparking speculation here that South Korea has caved in to US pressure on the currency market in order to win an exemption from steep steel tariffs.

Trade Minister Kim Hyun-chong reiterated the government’s stance that the ongoing talks over currency issues are separate from the KORUS FTA, noting that financial officials of the two nations are currently working on details to improve the foreign exchange policy transparency.

"I think the US mentioned the foreign exchange market in the process of promoting its performance (in the FTA revision), but the two are separate issues," Kim said in a press briefing. "The (Seoul) government has already revealed that the currency has been touched on at the bilateral finance ministerial meeting."

South Korea’s Finance Minister Kim Dong-yeon met with US Treasury Secretary Steven Mnuchin in Argentina on March 19, on the sidelines of a G-20 Finance Ministers and Central Bank Governors meeting.

South Korea avoided the currency-manipulator label in a twice-yearly US Treasury report, but was kept on a currency "monitoring list". The Treasury Department is set to release its semiannual currency report later this month.

Kim also refuted speculation over providing easier access to the Korean fruit market during the FTA talks, saying US officials’ mentioning of progress in the sector was related to the customs verification process.

In an annual trade barrier report published two days following the joint statement on FTA, the US Trade Representative (USTR) said the US is requesting access for blueberries from states beyond Oregon, improvement in the cherry export program and Korean access for US apples and pears, which are currently banned.

The report said the two governments discussed those issues at bilateral meeting in November, noting it is continuing to press South Korea to allow imports of these fruits from the US.

Kim said the USTR’s mentioning of market access to the fruits is related to the application of the sanitary and phytosanitary (SPS) measures, which are set by the members of the World Trade Organization.

"It is an SPS issue, not FTA negotiation issue," Kim said. "If (South Korea’s) agriculture ministry concludes that (the American fruits) comply with the local sanitary regulations, we will positively consider (their imports). If not, we can ban them from entering the country."