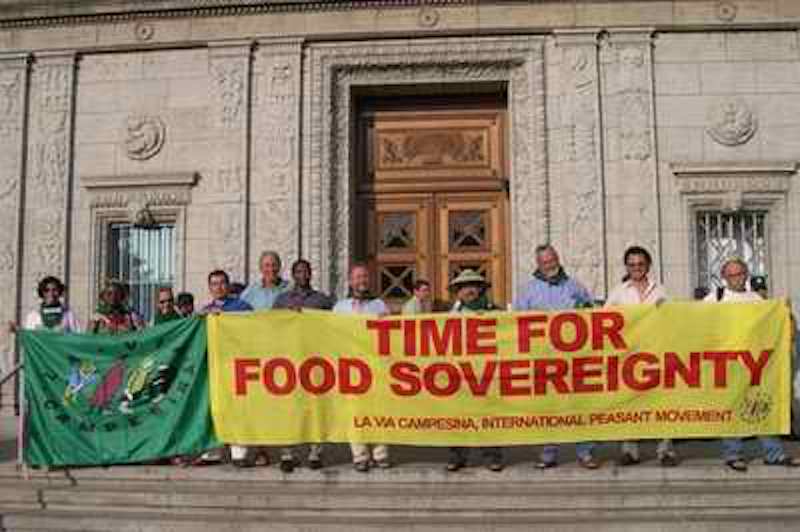 Our network has recently spoken out in two press statements dated 01 and 05 March 2022 against border controls and racist exclusion in accepting war refugees from Ukraine [1].

However, the consequences of the war in Ukraine reach far beyond the borders of the European continent, as we want to show with this statement. Both parties to the war, Russia and Ukraine, are among the world’s largest exporters of wheat. Many countries in the global south, including those where our network is active, are dependent on wheat imports, of which significant parts often come from Ukraine and Russia [2]. Their supply situation is now acutely threatened. Due to the absence of Ukrainian and Russian wheat imports, the global price of wheat has already reached a record high [3].

This poses a threat especially to poorer urban populations living in countries where many wheat products are consumed but not grown domestically. For example, in Tunisia, wheat products are already being rationed in supermarkets because many people have started hoarding products made from wheat in anticipation of scarcity. Compared to the Maghreb countries, which are heavily dependent on wheat imports, Germany, which is highly self-sufficient, does not have to worry [4]. However, this should not be a reason to sit idly by and watch as food becomes scarce elsewhere, but instead urge us to show international solidarity.

Dependency on food imports is, among other things, a consequence of the global free trade regime. The latter has pushed many African countries into dependence on food imports after successfully destroying or at least weakening [5] local markets for food [6]. In times of crisis, such as the war in Ukraine, the Covid19 pandemic, the climate crisis and/or economic crises, the risk of such food dependency becomes particularly drastic, but the model also has serious disadvantages in apparent “non-crisis times”. The more (usually highly subsidised) food is imported from abroad, the more rural agriculture and livestock are pushed out of local markets. Thus, rural exodus, which often leads to urban poverty and a lack of future prospects, is virtually pre-programmed.

The debt relief at the beginning of the 2000s was tied to draconian conditions – for example, it was accompanied by a ban on the storage of staple foods in Niger or the requirement to reduce subsidies for staple foods. This has left its mark to this day, because much of what was demolished at that time could never be rebuilt.

Food sovereignty has already been achieved once, largely through protectionist trade policies, in Burkina Faso in the 1980s under the four-year presidency of Thomas Sankara [8]. However, this happened before the founding of the World Trade Organisation (WTO) and under the political rejection of structural adjustment programmes, and thus in a context in which the scope for the application of protectionist trade policies was even greater than it is today. One of the trade policies applied under Sankara was to set a minimum percentage of local grain for the production of bread and beer in the country. Now that wheat imports are set to collapse, the moment would be right to politically promote local flour alternatives, such as flour made from millet, maize or cassava.

In order to strive for such food sovereignty (and thus politics of resistance against economic exploitation by the free trade regime), we need a state of exception or waiver from those rules of the World Trade Organisation (and the multilateral free trade agreements based on it, such as the EPAs and the Post-Cotonou Agreement) that are diametrically opposed to the goal of food sovereignty. Together with many other civil society actors, we have already called for a WTO waiver, i.e. a repeal of a certain package of WTO trade rules, in the context of the ’make them sign’ campaign to repeal patent rights on Corona vaccines and medicines [9]. The same principle, addressed to the same international organisation, could also be applied in the context of the looming hunger crises due to the war in Ukraine, in order to avert the worst.

Thus, strengthening local, smallholder production and consumption of food is not only groundbreaking in the climate crisis, but also an instrument for sovereignty and against hunger. The most sustainable way to address this is not, or at least not only, through short-term food aid, but through protectionist, trade policy measures. In order to be able to implement such measures without sanctions, however, the global trade rules currently in force in the WTO must be adapted or suspended, a kind of WTO waiver 2.0. We must prevent the war in Europe from driving the populations of African countries into a hunger crisis!

To prevent potential hunger crises in African countries and to fight against the dramatic effects of the war in Ukraine on the food supply in those states, we demand:

A global practice of solidarity to actively counteract the consequences of war on food insecurity and hunger;

An adjustment or suspension of the global trade rules currently in place at the WTO, which conflict with the goal of food sovereignty;

An end to and no expansion of further free trade agreements (such as the EPAs and the Post-Cotonou Agreement) that lead to the destruction or weakening of local food markets in African countries and make them dependent on food imports;

Prioritising the right to food and at best food sovereignty over any ideas of free trade;

A proactive response to potential hunger crises, rather than waiting until it is already too late.

For further questions, please contact us at [email protected]

[1] 01 March: Statement by Afrique-Europe-Interact on racist controls on refugees from Ukraine https://afrique-europe-interact.net/2116-0-Ukraine-Kein-Rassismus-an-der-Grenze.html ; 05 March: For the admission of all war refugees from Ukraine! No to racist exclusion! https://afrique-europe-interact.net/2118-0-Ukraine-Fr-das-Recht-auf-Flucht-fr-alle.html

[2] Also, dropping oil exports, especially from Russia, have transnational impacts and directly contribute to food price increases, as most food is transported across countries by cars or trucks. Similarly, the loss of fertiliser exports from Ukraine and Russia will pose major challenges to many farmers, as viable alternatives are lacking in many places.

[5] This applies both to the case where the same product is offered both locally and imported, as well as to the case where previously non-locally consumed food has found its way into local food cultures, partly due to its cheap supply. Some African countries produce wheat themselves in addition to imports (in particular Morocco, Algeria, Tunisia, Egypt and Ethiopia), while in others, such as Senegal, baguettes are eaten for breakfast (a remnant of the French colonial era), but no wheat is produced. Source: https://upload.wikimedia.org/wikipedia/commons/e/e5/Production_of_wheat_%282019%29.svg

[6] see e.g. the situation in Cameroon after the implementation of the EPA Free Trade Agreement https://www.youtube.com/watch?v=1TTVGV8w5cU

[7] In our latest AEI newspaper you will find an interview with activists from both groups: https://afrique-europe-interact.net/files/aei-zeitung_2021_22.pdf