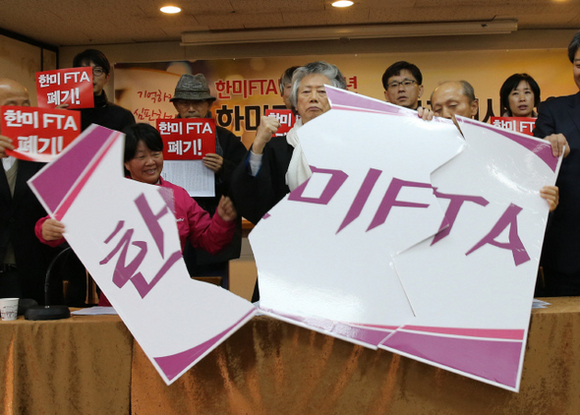 Members of the Korean Alliance Against the KORUS FTA at a Nov. 22 press conference in Seoul’s Jeong neighborhood. Yesterday was the first anniversary of the bill’s forceful passage in the National Assembly. (by Park Jong-shik, staff photographer)

Still many unresolved issues with the KORUS FTA

One year after the South Korea-United States Free Trade Agreement (KORUS FTA) took effect, many issues between the two sides remain unaddressed. Among these are the investor-state dispute (ISD) clause, which then-President Lee Myung-bak pledged to renegotiate in 2011, as well as other matters involving items produced at the Kaesong Industrial Complex and the quota system for professional visas. With responsibility for the KORUS FTA passing over from the Ministry of Foreign Affairs and Trade to the new Ministry of Industry, Trade and Resources (MITR) under President Park Geun-hye, little progress is being made in these areas.

For the ISD issue, a task force established in March 2012 to draft a plan for the South Korean government was disbanded in December. It did propose a plan, but the government has yet to present a clear position on the matter. Yoon Sang-jik, the Minister of Industry, Trade and Resources, said recently before the National Assembly that there were “areas where sufficient agreement is needed beforehand” in terms of whether to renegotiate the provisions or merely reopen discussions on them. He also said he planned to take action “once things are ready.”

Another issue has to do with whether place of origin recognition will be granted to products from outward processing zones such as the Kaesong Industrial Complex in North Korea. Annexes to the KORUS FTA state various conditions and considerations that have to be weighed, including progress in North Korean denuclearization, the effects of designation on inter-Korean relations, and standards for environmental conditions, labor practices, wages, and management within the zone. But with North Korea having recently carried out a nuclear test, the matter looks less likely to be addressed when the outward processing zone committee convenes this year.

Also unresolved are matters concerning professional visa quotas and a lack of benefits from the agreement. The South Korean government touted the quotas as a major achievement of the KORUS FTA. Indeed, the US has granted these quotas to other countries with which it has FTAs. Australia received a quota of around 10,000 after signing an FTA with the US. South Korea is the only country where there is still a question mark.

Meanwhile, a number of companies are failing to see any benefits from the agreement. As of late 2012, the percentage of FTA usage by exporting companies - reflecting the quantity of products receiving actual tariff benefits out of all eligible exports and imports - stood at only 68.9%. The Small and Medium Business Administration and the Korea Customs Service set up departments to provide FTA benefits, but little progress has been made.

A source at a Daegu export brokerage firm explained that the place of origin proof requirements were so stringent that firms felt compelled to order only through the companies that were able to meet them.

“The export orders aren’t going to SMEs,” the source said.