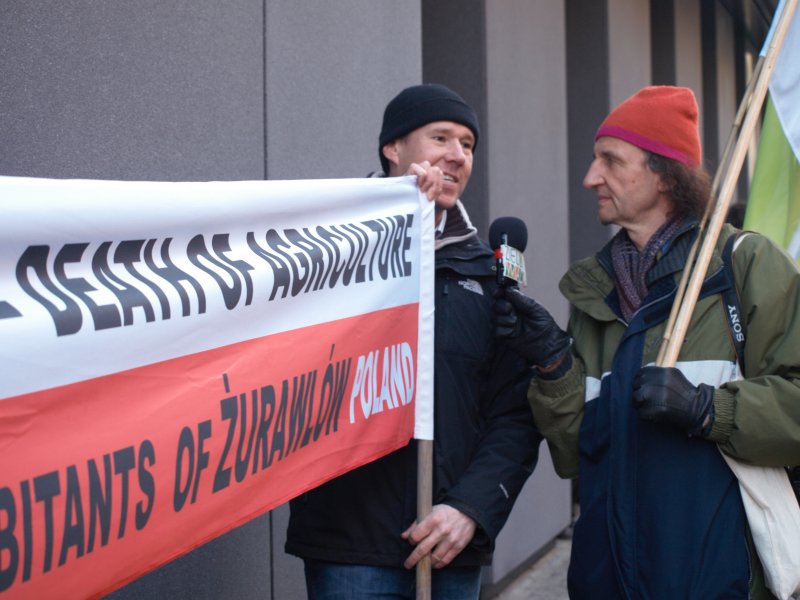 Farmers have been occupying a piece of land to prevent Chevron from drilling in Zurawlow, Poland. Such struggles to prevent fracking by US corporations could become more difficult under TTIP. (Photo: ARC2020)

A group of 31 Polish non-governmental organisations is concerned about several provisions of the Transatlantic Trade and Investment Partnership (TTIP), a trade deal between the EU and the US – as well as the secrecy surrounding the negotiations. The 7th round of TTIP negotiations starts in Chevy Chase, Maryland, on Monday.

Poland is the 8th most frequently sued country in the world under the controversial Investor-to-State Dispute Settlement mechanism (ISDS). There have been 16 known cases filed by foreign investors against Poland, but the actual number may be much bigger.

’Poland has been sued by US investors at least six times,’ said Marcin Wojtalik of the Institute of Global Responsibility in Warsaw. ‘Poland has been under the regime of the ISDS since the early 1990s, through Bilateral Investment Treaties (BITs), and has sensed how damaging it is to the budget and to citizens’ right to access to public information. Now, with the TTIP, excessive investor protection is going to be set in stone not only for Poland but the whole of the EU. Europe cannot allow this to happen.’

A joint statement has been signed by an ad hoc group of Polish organisations and coalitions of organisations from a wide range of sectors: digital rights, civil rights, environment and climate change, organic and traditional farming, anti-GMO, local, fair trade and development NGOs.

Polish NGOs have joined a European civil society statement that demands transparency and a more democratic process of negotiations, cancellation of ISDS chapter and cancellation of regulatory co-operation. NGOs are also warning about possible deregulation of standards and privatisation of public services.

’Regulatory co-operation is a key threat of the TTIP,’ says Józef Halbersztadt of Internet Society Poland. ’The proposed Regulatory Cooperation Council may give more influence to corporate lobbyists and take some power away from democratically elected bodies in both the EU and US.’

A statement of European civil society groups concerned with the TTIP was published in English in May. The text can be found at: http://www.bilaterals.org/?people-environment-and-democracy. The group of 30 Polish NGOs chose in September to sign the same statement. The Polish version and a list of signatories from Poland is at: http://www.uwagattip.pl

Actual details of compensation in all ISDS cases against Poland are not known because the Polish government systematically refuses to disclose details, even when challenged in court. The Polish government cannot disclose this information because its hands are tied by Bilateral Investment Treaties (BITs) that often explicitly forbid transparency. Now the TTIP threatens to set this situation in stone, as the TTIP does not properly address concerns about the secrecy of the ISDS system. It may mark the final end to citizens’ right to public information on how much each ISDS case costs the tax payer, and what are the names of the companies that benefit from it.

Some of the Polish NGOs that signed the statement in September are also part of the European Citizens’ Initiative (ECI) which aims to stop trade deals between the EU and the US, and between the EU and Canada – the TTIP and the CETA, respectively. The registration of the ECI was recently rejected by the European Commission (EC) on legal grounds. The organisers announced that they will collect signatures for an autonomous ECI, even without recognition by the EC. Signatures will be collected off-line and through: http://stop-ttip.org