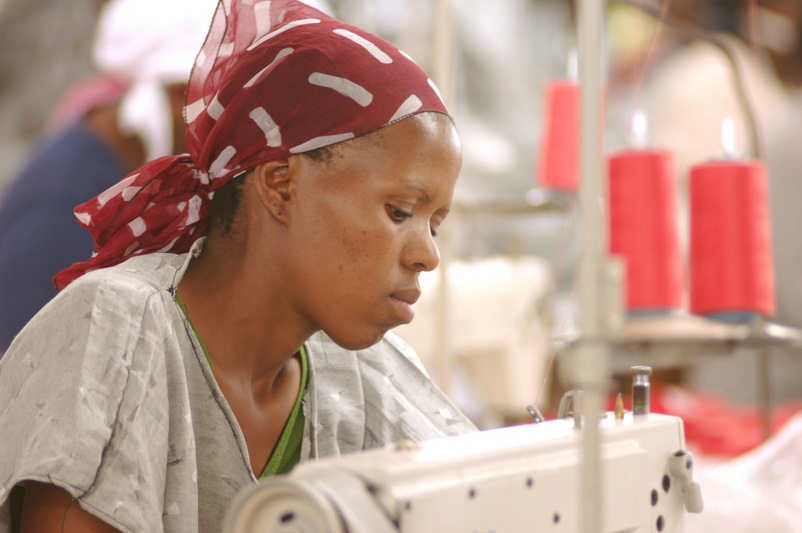 Neither Swaziland nor Lesotho had a textile sector before the advent of AGOA (Photo: Apparel Lesotho Alliance to Fight AIDS)

SWAZILAND: Not much benefit in preferential trade agreement

MBABANE, 28 April 2010 (IRIN) — A decade after the African Growth and Opportunities Act (AGOA), a preferential US trade agreement, became law on 18 May 2000, there are questions over the benefits, if any, derived from the initiative.

AGOA was touted by the US government as offering "tangible incentives for African countries to continue their efforts to open their economies and build free markets"; in return, selected countries could access US markets without restrictive quotas or import taxes.

Neither Swaziland nor Lesotho had a textile sector before the advent of AGOA, but the quality of the jobs it created, and the labour conditions and working environment, are being examined by local as well as US authorities.

"We ask: who is the beneficiary of the textile factories that have opened here since AGOA?" said Comfort Gina, secretary general of the Swaziland Federation of Trade Unions (SFTU), an umbrella body. "Jobs were created, but if you take the basic income versus expenditures of a worker, basics like transport, food and accommodation exceed income."

The average monthly wage for a textile factory worker is about US$117, according SFTU data. "Workers are paid below the taxable income level, so the national economy at large isn’t benefiting either," he told IRIN.

During the peak period of Swaziland’s AGOA exports, employee numbers were double the current figure — about 15,000 Swazis, mostly women, are employed in garment factories financed by Taiwanese investors and operated by managers from mainland China.

A strengthening of the local currency — the Lilangeni, which is pegged to the South African rand — combined with the global economic slowdown, resulted in a steep decline in orders.

Factories have closed, some of which were built at government expense and rented at very low cost to induce businesses to set up in the country. Worker housing was not built, and more often than not employees built informal housing as close to their workplaces as possible.

Felicia Dlamini, a developmental economist based in the capital, Mbabane, told IRIN: "From the standpoint that AGOA brought jobs then, yes, it has been a success, though half the jobs are gone now; but we have to look at the quality of the jobs, and other factors that have impacted on the quality of people’s lives."

Zodwa Mavimbela, Assistant Commissioner for Verifying Audits at the Ministry of Finance, which monitors company tax compliance, commented: "Every country wants its workers to pay taxes — that’s what we hoped when the AGOA factories arrived. Taxes pay for social programmes, but the workers are paid too little to pay much tax, and the companies are unprofitable and don’t pay tax."

Gladys, 26, who declined to give her last name, is one of six women who share a room within walking distance of a factory in Matsapha, an industrial estate about five kilometres west of Swaziland’s commercial city, Manzini.

They sleep in shifts, heat water on a gas stove, and bathe in a metal tub; their meals usually consist of bread, maize-meal porridge and vegetables — meat is a rarity.

"All of us have to support children and families. Most of us are from the rural areas — we were driven from there by the poverty and drought," said Gladys, a mother of two who works as a seamstress at the factory.

’’There is not a single factory that has a collective bargaining agreement with a workers union’’ "That is why we all have boyfriends — even the married girls — because we need gifts from them to buy clothes and pay for our children’s school needs," she said.

Swaziland is ruled by sub-Saharan Africa’s last absolute monarch, King Mswati III, and democratic credentials weigh heavily in determining eligibility for AGOA, but because the country had begun work on democratic reforms, such as drawing up a new constitution, it just made the cut.

Labour law concerns were raised by the US Deputy Trade Representative, Ambassador Demetrios Marantis, at a meeting with government officials in February 2010. A US government official, who declined to be identified, told IRIN that if Swaziland did not improve its labour conditions it could lose its AGOA status.

"There is not a single factory that has a collective bargaining agreement with a workers union. On average, union representation at the factories is 30 percent — far below the 50 percent union membership needed for bargaining power," said SFTU’s Gina.

"Employers will give the appearance of cooperating with the union when AGOA inspectors come around, but they are doing everything they can to discourage unionization."

In March, Prime Minister Sibusiso Dlamini acknowledged the concerns over "the rate of progress by Swaziland in the implementation of international labour agreements, and in particular the effectiveness of monitoring working conditions, and the freedom to organize under the laws of Swaziland."