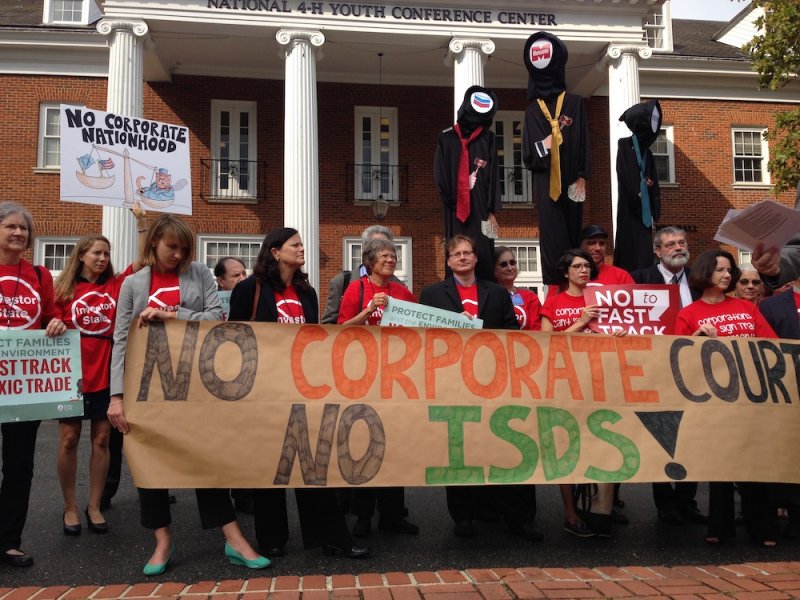 Investor-State Dispute Settlement (ISDS) empowers multinational corporations to sue our governments before panels of three corporate lawyers. These lawyers can award the corporations unlimited sums to be paid by taxpayers, including for the loss of expected future profits that the attorneys surmise the corporations would have earned if not for the challenged policy. The corporations need only convince the lawyers that a law, safety regulation, court ruling, or other government action violates the investor rights that an agreement enforced by ISDS grants them. The lawyers’ decisions are not subject to outside appeal. Only corporations have rights and can initiate ISDS cases. ISDS tribunals often make countries pay for tribunal costs even when dismissing corporate attacks, so the mere threat of a case as a chilling effect. By elevating individual corporations to the same status as sovereign governments, ISDS drastically consolidates and formalizes corporate power. And by effectively providing free “risk insurance,” these corporate protections make it less risky and cheaper to outsource jobs.

The North American Free Trade Agreement (NAFTA) was the first U.S. trade pact to include ISDS and established an array of new corporate rights and protections that were unprecedented in scope and power relative to past trade deals. NAFTA also was the first agreement to provide ISDS powers to corporations from a country, Canada, from which there was significant investment in the United States. Most ISDS cases against the United States have come from Canadian corporations. Prior to NAFTA, the United States had signed Bilateral Investment Treaties enforced by ISDS only with various developing countries. But now, NAFTA’s extreme rules have been replicated in other U.S. “free trade” agreements (FTAs), including the Central American Free Trade Agreement (DR-CAFTA) and FTAs with Korea, Colombia, Peru, Panama and Oman.

ISDS tribunals have ordered governments to pay corporations more than $989 million in compensation after ISDS attacks launched just under U.S. agreements. The corporate payoffs came after attacks on natural resource policies, environmental protections, health and safety measures and more. In fact, of the more than $32.6 billion in the 35 pending ISDS claims under NAFTA and other U.S. FTAs, nearly all relate to environmental, energy, financial, public health, land use and transportation policies – not trade issues or government seizures of property or investments.

ISDS creates a parallel and privileged set of legal rights for multinational corporations to own and control other countries’ natural resources and land, establish or acquire local firms, and to operate them under privileged terms relative to domestic enterprises. For instance, corporations have received payouts when new policies undermine their “expectations” of a “stable regulatory environment.” The scope of the “investments” covered is vast, including derivatives and other financial instruments, intellectual property rights, government licenses and permits, as well as more traditional forms of investment.

The rigged ISDS enforcement system allows multinational firms to skirt national court systems and privately enforce their extraordinary privileges by directly challenging national governments before extrajudicial tribunals. Cases are litigated outside any domestic legal system in international arbitration bodies that operate under various international arbitration rules that are specified in the texts of ISDS-enforced agreements. The corporation bringing the case can choose which rules it prefers for a case. Many cases proceed under the auspices of the World Bank’s International Centre for Settlement of Investment Disputes (ICSID). ISDS cases may also be brought using the United Nations Commission on International Trade Law rules or under international arbitral tribunals governed by different rules or institutions, such as the London Court of International Arbitration (LCIA), the Hong Kong International Arbitration Centre (HKIA), or even the International Chamber of Commerce (ICC). When state laws are challenged, states have no standing in the cases and must rely on the federal government to defend policies that the federal government may not support.

While fewer than 50 cases were filed in the first three decades of the investor-state system, corporations launched at least 50 cases each year during this decade, intensifying concerns about the system’s threats to democracy, taxpayers and the public interest.[i] Countries as different as South Africa, Ecuador, Bolivia, Indonesia and India have withdrawn from or renegotiated their ISDS-enforced pacts. Others, like Brazil, refused from the beginning to take part of the ISDS rigged system.

Even the United States, once the world’s leading proponent of ISDS, has largely eliminated ISDS from the revised NAFTA, which entered into force on July 1, 2020. That pact phases out the original NAFTA ISDS provisions (Chapter 11-B). By July 2023, ISDS will be altogether terminated between the United States and Canada. As shown below, the majority of the claims faced by both countries have come from investors who are nationals of, or firms incorporated in, the other country. All but one of the past NAFTA ISDS payouts that related to environmental issues involved U.S. firms attacking Canadian toxics bans and timber, energy, mining and other policies. Terminating U.S.-Canada ISDS also would eliminate 92% of U.S. ISDS liability under NAFTA and most U.S. ISDS exposure overall.

With respect to Mexico, the revised NAFTA contains a new approach that eliminates the extreme investor rights relied on for almost all ISDS payouts: minimum standard of treatment (MST) and the related fair and equitable treatment (FET) standard, indirect expropriation and performance requirements. No pre-establishment claims are allowed, meaning the “right to invest” is removed. It also addresses some major ISDS procedural problems by banning inherently speculative damages and forbidding lawyers from “judging” cases while suing governments on behalf of corporations. The new process requires investors to first use domestic courts or administrative bodies and exhaust domestic remedies available to resolve their dispute with a government—or try to do so for 30 months. Only then may a review be filed and only for direct expropriation or post-establishment discrimination (national treatment or most favored nation). However, a secondary U.S.-Mexico investment annex is highly problematic, although limited in its practical application. This Annex 14-E preserves full ISDS rights for investors that have certain types of contracts with the federal government in a listed sector. Neither the U.S. nor Mexican federal governments use contracts with respect to most of the listed sectors. The exception is 13 concessions signed by Mexico’s Hydrocarbon’s Authority that nine U.S. oil and gas firms obtained during Mexico’s 2015 partial privatization of that sector. These U.S. firms retain access to the old NAFTA ISDS as long as Mexico provides ISDS rights in agreements with other countries, which it currently does.

The U.S. government has also announced that an FTA it is negotiating with the United Kingdom will not include ISDS. This and the near-elimination of ISDS from the revised NAFTA reflect the reality that the Trans-Pacific Partnership, which had an expanded ISDS regime at its core, could not win a congressional majority in the year after it was signed in 2015. Indeed, the U.S. National Conference of State Legislatures representing the mainly Republican GOP-controlled U.S. state legislative bodies, the U.S. National Association of Attorneys General, the National Association of Counties, the National League of Cities, organized labor (including the AFL-CIO), major environmental groups (including the Sierra Club), hundreds of law and economics professors, faith groups, consumer groups (including Consumers Union and the Consumer Federation of America), over 100 small businesses, over 100 health organizations (including Doctors Without Borders and Oxfam), the AARP, and over 1,000 civil society groups, and Democratic and Republican members of the U.S. Congress alike have called for ISDS to be removed from U.S. trade agreements.[ii] Stark criticism of ISDS also has come from voices as disparate as U.S. Supreme Court Chief Justice John Roberts, pro-free trade think tanks such as the Cato Institute and progressive Senator Elizabeth Warren (D-Mass.).