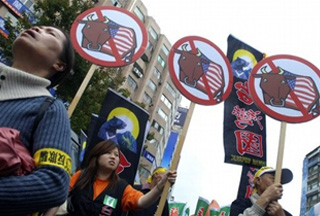 Thousands of protesters demanded the Taiwan government continue to ban US beef in a demo on Nov. 14, 2009, in Taipei.

Taiwan bans import of US beef

In a reversal of a negotiated deal with Washington, Taiwanese lawmakers on Tuesday banned imports of some kinds of beefs from the United States, citing health concerns.

"To protect the health of the people is a huge responsibility of ours," said the Chinese Nationalist Party (KMT) caucus. "There were hardly any opposition voices."

The amendment to the Act Governing Food Sanitation argued against the imports of “risky” beef products from areas where cases of mad cow disease have been documented over the past decade, Chinese English-language newspaper Taipei Times reported on December 30.

The first Taiwanese block on the imports came in 2003, when the first case of the mad cow disease was reported within the US borders. The island partially opened its market to US beef imports in 2006.

Washington has played a role in pressuring Taiwan to reopen its market.

The de facto US embassy on the island reacted to the ban.

"This action also undermines Taiwan’s credibility as a responsible trading partner and will make it more difficult for us to conclude future agreements to expand and strengthen bilateral trade and economic ties going forward," it said in a statement.